Mourning in America? Canadians Are Closely Watching a U.S. Election that Could Turn Very Ugly 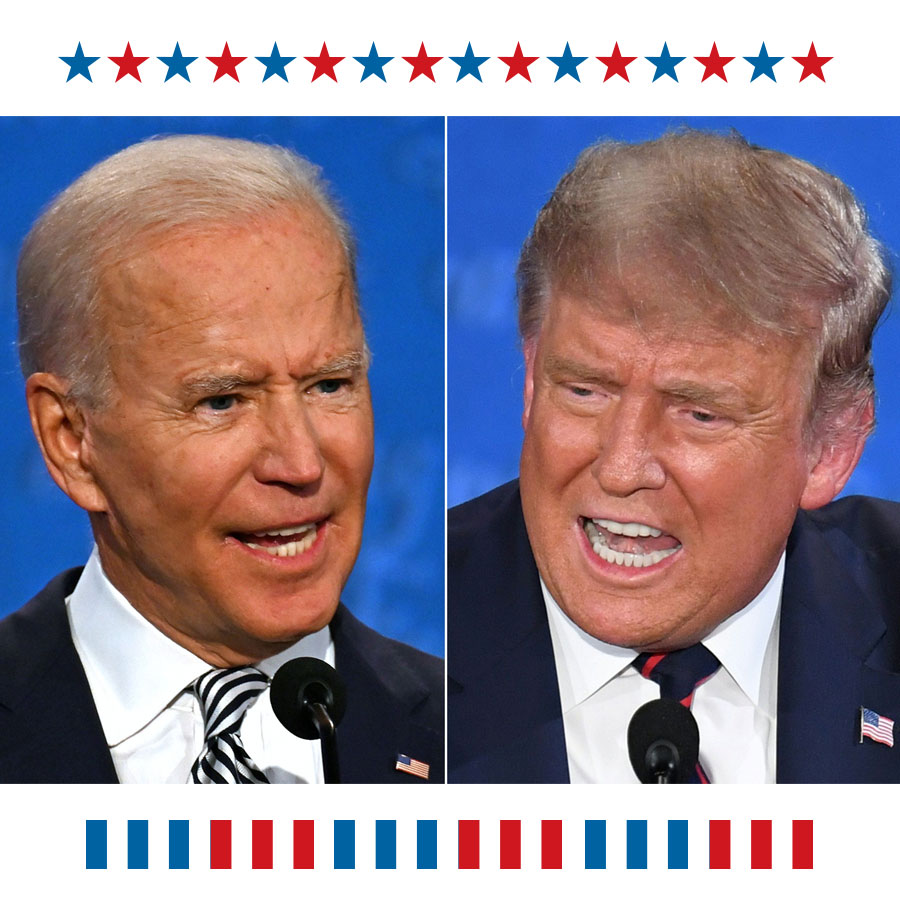 With America poised to elect its oldest president ever, Canadians are on the edge of their seats watching to see how Donald Trump will react to a Joe Biden victory. Photo: Jim Watson ,Saul Loeb/AFP via Getty Images

Americans have already cast more than 91 million ballots by mail or at advance polls but Tuesday is officially Election Day in the U.S.A.

Why should we Canadians care?

Because beyond all the ties that bind Canada to the behemoth next door, one of the few things that can still shock and surprise us — aside from Mother Nature and her whimsical penchant for pandemics and such — is an American election.

Canadian elections, not so much.

Up here, we don’t vote directly for our leader. The candidate with the most votes wins the riding and is given a seat in Parliament. The party that wins the most seats forms the government. That party’s leader becomes prime minister. If no party wins a majority, there are coalitions and compromises.

Elections here are straightforward. Stable. Not fraught. Very Canadian. No buildings boarded up in anticipation of civil unrest. Nobody brings a gun to the polling stations or tries to run campaign busses off the road.

Down there, it’s not so straightforward.

While Americans vote directly for their president, the person elected may not be the one who gets the most votes. The loser may be the winner, and the winner may be the loser.

In 2016, Hillary Clinton received three million more votes than Donald Trump. And she won the popular vote by more than two per cent. But Trump captured the White House by virtue of winning the majority of the Electoral College votes – 304-227.

Go figure. In the U.S., votes are funnelled through an Electoral College which seems to dole them out to states according to some arcane formula from the dark ages of democracy that empowered privileged white men.

Fast forward a couple of centuries to 2020. Those same men now wear MAGA red baseball caps or spiffy Wall Street wardrobes, and they’re the backbone of the Republican Party. Even if Donald Trump isn’t their favourite person, he’s the president that brings them power – or at least makes them feel powerful.

He’s also a superlative con man and showman. It’s why so many people, including suburban women, Hispanics and your run-of-the-mill misogynist Hillary haters got sucked in four years ago.

Waiting on the Edge of Our Seats

But here on the brink of the 2020 results, we’re waiting on the edge of our seats waiting to see what happens next.

We may want to wait in bed instead. It’ll likely be later Wednesday or even Thursday before we know who won the election and whether the Democrats will get a majority in the Senate.

Meanwhile, we’ll be trying to keep tabs on whether the coalition of women, Black voters and Hispanics that rallied round Obama during his two terms reasserts itself in support of Joe and Kamala. In 2016, the Democrats lost Michigan, Pennsylvania and Wisconsin, in part because these voters weren’t motivated to support the ticket.

And what will Texas do this time around? The race is closer in Texas than it has been for the last 50 years. Some pundits suggest that if Texas goes blue, backing Biden, it’s all over for Trump. But Texas may not have its votes counted until Wednesday or Thursday.

Florida is another key state to watch — or, as they like to say in America where militias roam the land — a battleground state. It’s also an early bellwether state with Florida results expected late Tuesday or early Wednesday.

If Trump loses Florida and its 29 Electoral College votes, pundits predict, it’s almost impossible for him to amass the 270 out of 538 votes he needs to keep his White House address.

If the results are closely contested — and Trump has warned that, if necessary, he would do just that — the Supreme Court will decide the winner. And with Trump’s questionable appointment of Amy Coney Barrett just in time for the election, the Supremes are decidedly on his side.

At a rally over the weekend, he said cheekily, “If we win, if we win on Tuesday or, thank you very much Supreme Court, shortly thereafter…”

The only thing that may prevent a post-election fiasco and Trump’s whining about voter fraud is a Biden blow-out. This is entirely possible according to some experts. However, other experts predict that it will be very close. Some even think Trump will be re-elected.

It’s no wonder that therapists in the U.S. are offering counselling for pre-election anxiety.

And then comes post-election anxiety.

It’s not just about the mayhem that may happen if Trump loses but refuses to transfer power. It’s also about what will happen when whoever is in the White House starts running the country, what kind of country the behemoth will be.

The Oldest President Ever

For sure we’re not getting the torch passed to a new generation, as John F. Kennedy celebrated after he won 60 years ago. Both Trump at age 74 and Biden, who turns 78 on Nov. 20, are old men.

They’re at an age when they’d qualify for geriatric care. Both are looking backward to their own views of a better past. Should Biden win, in two years we could see an octogenarian in the Oval Office.

Sure, there are people in their 80s who are vital, energetic and wise. But like it or not (and those of us in our 70s do not like it), nobody is at the top of their game at 80.

As a Zoomer magazine article that explored the role that age might play in this election concluded: “It seems some cognitive decline is nearly inescapable among those over 70, and the Trump-Biden showdown has prompted more than one observer to call for a maximum age limit for the presidency.”

So we’re waiting and watching: when the sun rises the day after we know for sure who will be president for the next four years, will it be morning in America or mourning in America?