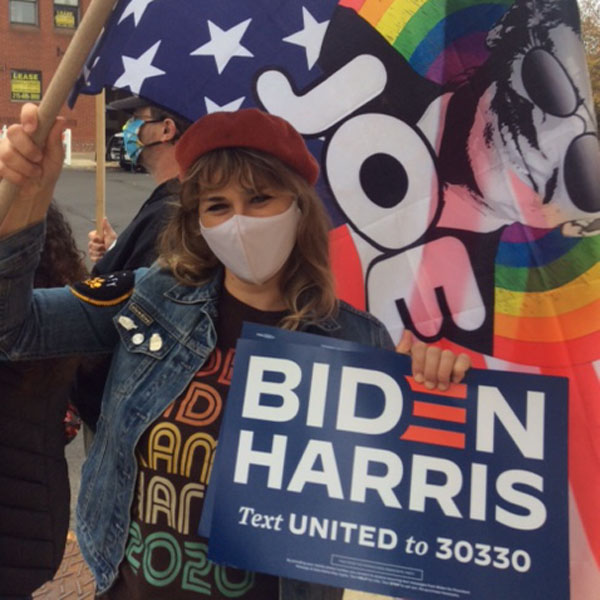 Larissa Hopwood, a 41-year-old children's musician, waves a rainbow flag with Joe Biden’s face on it during a recent "Ridin’ With Biden" car parade in Doylestown, Penn. Photo: Johnanna Schneller

Four years ago, noted journalist, Zoomer contributor and U.S. citizen Johanna Schneller watched and railed and tweeted from her Toronto home as Donald Trump beat Hillary Clinton to be named U.S. President. This year, she decided she couldn’t sit the election out. So, on Oct. 4, she drove to her hometown of Easton, in the swing county of Northampton and swing state of Pennsylvania, to do what she can to help Joe Biden’s campaign. And as the election looms on Tuesday, Pennsylvania could help decide who comes out on top.

Rather than winning the presidency via attaining the majority of the popular vote, the United States Electoral College holds that the candidate who wins the majority of the votes from the 538 electors, who collectively represent each state, becomes president. That means 270 votes. Many pundits believe that Pennsylvania’s 20 Electoral College votes will prove vital in either helping Trump retain the presidency or providing Joe Biden a path to win it. And on top of that, Pennsylvania is also Biden’s home state.

This is Schneller’s third dispatch from the U.S. ahead of the Nov. 3 election.

On Saturday, a guy in Saucon Valley, PA sicced his dog on me.

I told him I was canvassing for Joe Biden. He told me to go away. I said, “Sorry to bother you.” He shut his front door, and I walked back to my car, typing “Refused” next to his name in the canvassing app on my phone. Next thing I knew, a big black dog was up against my knees, growling. The man hadn’t let the dog out the front door, where we’d talked. He let him out the sliding doors, nearer to my car. I knew this because I could see the man through the crack between the doors. “It’s okay, puppy,” I said — to the man. “I’m leaving.”

Everyone is cranky. Everyone is tense. Everyone just wants this thing to be over. Knocking doors in Easton on Sunday, I told a nice woman that the polls will be open from 7 AM to 8 PM, and she snapped at me, “I know how to vote. I’ve been voting my whole life.” In the next street over, a woman told me she’d taken the Biden signs off her lawn “because things are getting too ugly. I don’t want my property damaged.” Pennsylvania’s 20 electoral college votes — the make or break number, according to the red and blue election maps that all the news outlets are obsessively drawing right now — are still in play. Early voting here was less than in other swing states. It’s looking like historic numbers of Pennsylvanians will turn out on Tuesday. So the ground campaigns remain in high gear. This past weekend, 500 door-knockers fanned out across Northampton County. Phone canvassers made 2.4 million calls in PA on Saturday alone. Canvassers will be knocking doors until 6 PM on election day itself.

Donald Trump made four campaign stops in Pennsylvania on Saturday — four! — in what has become his signature nightmare scenario: people packed together and few masks among them. On the same day, Stanford University released a study that determined that 18 Trump rallies held between June 20 and Sept. 22 had resulted in more than 30,000 confirmed cases of COVID-19, and 700 deaths. (Some of the dead were attendees, others had been infected by attendees.) Those Saturday rally-goers won’t learn if they’re infected until after the election. But there they were, cheering, scattering droplets, and possibly altering their lives and the lives of those they love.

Joe Biden did two rallies in Pennsylvania on Sunday, but his are so safe they’re nearly invisible. They tend to be private events, ticket-only. They’re held outdoors, 50 masked attendees sitting six feet apart on chairs set in circles chalked on the grass. Or they’re in parking lots, 300 to 400 cars, four people maximum per car. People listen to the speeches on their radios, and honk in response.

The Democrats’ caution allows the Republicans to crow — as several of them have, to me — that no one is showing up for Biden. And it’s true — Biden supporters don’t exhibit the public fervour that Trump’s folks do. Last Sunday, as I stood on a street corner in Doylestown watching a Ridin’ With Biden caravan go by, the contrast with a Trump caravan the week before was striking. The Biden cars came six at a time, because they stopped for red lights. The Trumpers, a solid line of shiny metal and blaring horns two hours long, had been waved through intersections by police hired for the occasion. (Though the $19,000 that the town of Newtown, PA spent on those extra police has not yet been paid by the caravan organizers.) The Biden cars were smaller — more energy efficient, natch — and modestly decorated. Their horns did not go HOOOONNNKKK; they went toot-toot-toot. Pretty soon they were coming in ones and twos, from random directions. It was a drive-by metaphor — no matter how hard we try, we cannot get Democrats to fall in line.

About 50 onlookers shared the sidewalk with me, in a light drizzle. Occasionally, they chanted: “Love not hate makes America great,” or “This is what humanity looks like.” Someone blew bubbles. Larissa Hopwood, 41, waved a rainbow flag with Biden’s face on it. She’s a children’s musician, and “to be honest, I was a Bernie Sanders supporter,” she told me. “I’m not so into Biden. But it’s so important we come together now. The Democratic party is so diverse. Sometimes we say, ‘It’s not my place to speak for you.’ But we have to be on the same side.”

That’s something I’ve been hearing a lot from Trump supporters: we passionately love our guy; you barely even like yours. Their narrative is consistent, even when it’s unpleasant. I’ve seen Trump cars displaying confederate flags (in Pennsylvania, home of Gettysburg, one of the deadliest battles of the Civil War). Hopwood claims to have seen Nazi salutes.

On a whim, I stopped into two gun shops in Bucks County, just south of where I’ve been canvassing. Neither store owner wanted to be identified by name, but both said the same thing: Gun sales have been rising, steadily, for six months. “My customers are Democrats and Republicans,” Gun Shop Owner #1 said. “I know because they tell me: ‘I’m a Democrat, I never bought a gun before, I need one now.’ They say, ‘I need a shotgun and a handgun, and I’ll take that one and that one.’ They do no research. They just want something that will fire. This political environment scares them, and they want something to give them some peace of mind at home.”

Gun Shop Owner #2 agreed. “Every day, for the last six months, multiple people have been coming in,” he said. “As soon as COVID started. And then it really kicked in with the riots. Husbands and wives, 20 years old to 70. All races. Lots of women by themselves, single women. This is way more than anything ever.

“People on the far left want to cause havoc,” #2 continued. “They don’t want normal. They don’t like our normal. They want the new thing. Trump folks won’t riot. We don’t do that. But we make sure we can defend ourselves.”

My own anxiety is considerable. I’ve talked to scores of voters, and I have no clue which way this will go. To cheer myself up, I think about Casey Smith, a young Black woman in Easton who told me that she and her three siblings, who are 20, 24 and 28, will go to the polls with their parents on Tuesday. “I could go by myself, I’m 26,” she said, smiling. “But my mom wants us all to go together, to make it a thing.”

I think about the 60-something white woman who spotted me in a post office mailing Biden shirts to Canada, and whispered in my ear, “Keep spreading the word.” I think about the Hispanic nurse in her 30s who told me her husband had never voted before, “but he’s going with me on Tuesday even if I have to drag him.”

I think about the line of canvassers who stood outside the Easton voter activation centre on Sunday, waiting in a cold rain to get their lists of addresses, while upbeat music blared from a speaker someone had covered with a White House umbrella. I think about the mess inside the voter activation centre. On Friday, thousands of door cards were bundled in neat stacks, waiting to go out; by Sunday they were gone, and the place was a sea of empty donut bags and random pieces of paper.

I think about the four high school girls I talked to at the Biden caravan, Helena, Carolyn, Talia and Elise. They are too young to vote, but they were out there waving rainbow flags. “Trump is doing negative things to people who need him,” Helena said.

“There are a lot of kids at school who love Trump,” Carolyn said. “They refuse to believe the truth about him. They say, ‘I’m right and I’m going to be right.’ I try not to hate them, but I really do have anger in my heart.”

I think about Tammie, a white woman in her early 50s, who drove up her steep, rutted driveway in Saucon Valley on Saturday just as I was getting into my car to leave. She rolled down her window and we started to talk. She’s going to vote on Tuesday, she said, for the first time in her life. But she still isn’t sure for whom.

I’d had a long day. I’d had that dog sicced on me. Every other day, I’d managed to complete my list. But today, though I’d been out for nearly five hours, I’d only knocked 61 of my 98 doors. (They were rural addresses, with crazy house numbers, miles apart.) Now it was 5:30. It was getting cold. And it was Halloween; I didn’t want to be canvassing while kids trick-or-treated. For the life of me, I could not understand how this woman saw no difference between Biden and Trump.

But she’d rolled down her window, so I asked her what she cared about most. She told me she’d lost her job at a doctor’s office when business stopped during the COVID lockdown, but she made too much to qualify for assistance. She’d called her local politicians, including one who’s running now. No one called her back. She doesn’t believe anyone in government wants to help her.

The campaign gives door-knockers a script, to help us tip people off the fence. But Tammie and I were beyond that. So I told her that I do see a clear difference between the two candidates; that’s why I’d come all the way from Toronto to canvass. I told her I’d never worked for a campaign before and now I’d knocked on over 600 doors. I told her the thing I’d realized about democracy was the one-by-one of it all, the drip-drip, vote by vote, person by person-ness of the process. Then we thanked each other for the chat, and I drove away.

In 2016, Trump won Pennsylvania by 44,292 votes. That boils down to just six votes per precinct. I did my best, but I have no idea which way Tammie will go on Tuesday. It’s up to her.