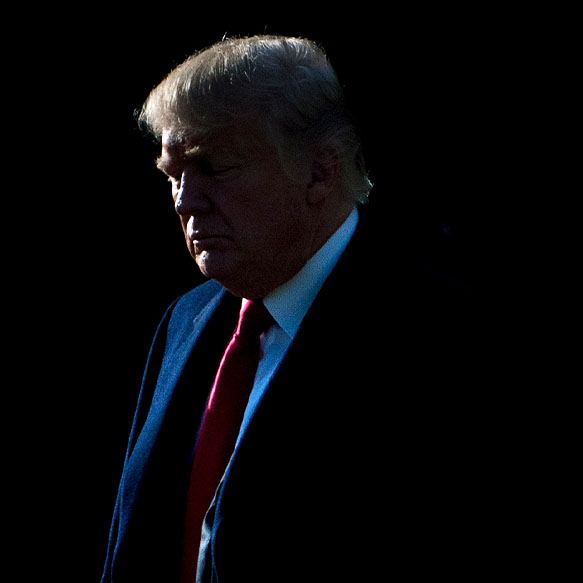 U.S. President Donald Trump was impeached today for an unprecedented second time on charges of “incitement of insurrection” for encouraging supporters to storm the Capitol. Photo: Brendan Smialowski / AFP via Getty Images

Even as Donald Trump’s term in office dwindles down to mere days, he continues to sink to new lows in American presidential history.

Today, the U.S. House of Representatives voted to impeach Trump on charges of “incitement of insurrection,” for his role in encouraging supporters to storm the Capitol building last week.

The impeachment vote, which passed by 232 to 197 (with 10 Republicans breaking ranks), means Trump becomes the first U.S. president to be impeached twice. He was also impeached in December 18, 2019 for “abuse of power” and “obstruction of Congress” in asking the Ukraine government to smear his presidential rival Joe Biden. (The Republican-led Senate voted to acquit Trump on both those charges.)

Pelosi: Trump is “A Clear and Present Danger”

This second legislative effort to remove Trump from office stems from the shocking events of January 6, when the President inflamed a mob of loyalists to “fight like hell” to overturn Joe Biden’s election victory.

Trump’s incendiary comments prompted a riot that saw armed insurrectionists take over and ransack the country’s seat of democracy. After the assault was quelled, five people were dead, multiple pipe bombs had been discovered and the American public was shaken.

Today, amid a huge presence of National Guard troops making the Capitol look like a war zone (they slept over in the halls of the Capitol), and police across the country on high alert for more violence, the House met early to debate the articles of impeachment after Vice President Mike Pence refused calls to invoke the 25th amendment to remove his boss from the White House for being “incapable of executing the duties of office.”

Setting the stage for today’s historic vote, House speaker Nancy Pelosi said impeachment must take place because Trump represented  “clear and present danger to the nation that we all love.” And she said that the constitutional remedy, “will ensure that the republic will be safe from this man who is so resolutely determined to tear down the things that we hold dear and that hold us together.

Sending a clear message to Trump’s dwindling number of supporters, legislators said they would not tolerate attacks on democracy by anyone, especially the President.

“I will vote to impeach this traitor to our country,” said Democrat Anna Eshoo in her speech today, echoing the sentiments of many of the gathered legislators. “He incited a mob that attacked the Capitol of the United States — the tabernacle of our democracy.”

Republicans Turn on Their Boss

Many representatives, including several high-placed Republicans, made impassioned speeches in favour of removing Trump from office. The third-ranking House Republican Liz Cheney — daughter of former vice president Dick Cheney — poured scorn on her own leader, saying that there has “never been a greater betrayal by a president of the United States.”

And Senate Leader Mitch McConnell, who had asked his senators not to vote to overturn the election — and whose wife, Elaine Chao, is the former Transportation Secretary who resigned from Trump’s Cabinet after the insurrection — has finally turned on Trump, letting it be known that there was a 50/50 chance of him voting for impeachment. Which is, perhaps, a case of too little, too late.

Still, McConnell’s office has already notified the Democrat impeachment leaders that he will not use his emergency powers to reconvene Senate before its new session begins on Jan. 19. Which means it’s unlikely that today’s impeachment will realize its goal of removing the president from office before his term ends on January 20. The articles still have to be debated in the Senate and passed by a two-thirds majority.

Responding to today’s vote, Trump resorted to the same tired line of defence he employed during his first impeachment trial, describing the proceedings as a “hoax” and calling it “the continuation of the greatest and most vicious witch hunt in the history of our country.”

But it won’t work this time around. The whole world watched in horror as Trump delivered his incendiary remarks, inciting the angry mob to “fight like hell” to “take back our country.” And they witnessed the terrifying outcome of his exhortations.

And with his political legacy in tatters, Trump’s business empire is also under increasing threat as tech giants, financial organizations and civic and sports groups begin distancing themselves from the president.

As well, German-based Deutsche Bank, which has financed Trump’s real estate projects after no other bank would work with him due to his bankruptcies — and continued to do so even after he sued them to avoid paying back money he owed — will finally cease doing business with the disgraced U.S. leader. And in a Shakespearean arc for the man who made his name, and “Art of the Deal” fame, in Manhattan real estate, New York Mayor Bill de Blasio said he would cancel all of the city’s contracts with the Trump Organization and remove his name from buildings.

In addition, after his old friend, New England Patriots coach Bill Belichick, refused the Medal of Freedom in a statement of reproach to Trump, the PGA voted not to hold its 2022 championship on a Trump-run golf course in New Jersey in what might be the most painful blow of all for the golf-mad president. That decision also most likely puts his dream to hold the British Open on his golf course in Scotland on the ash heap too.

With, in theory, only a week at most to go in his time in the Oval Office, the host of withering speeches made against Trump in the House today will serve as a final send-off to the most reviled American leader of all a time, and provide a fitting memorial to his failed presidency. The only president in history to also lose the popular vote twice has attempted to break the unbroken chain of the peaceful transfer of power that has made American democracy the proverbial shining light on the hill.