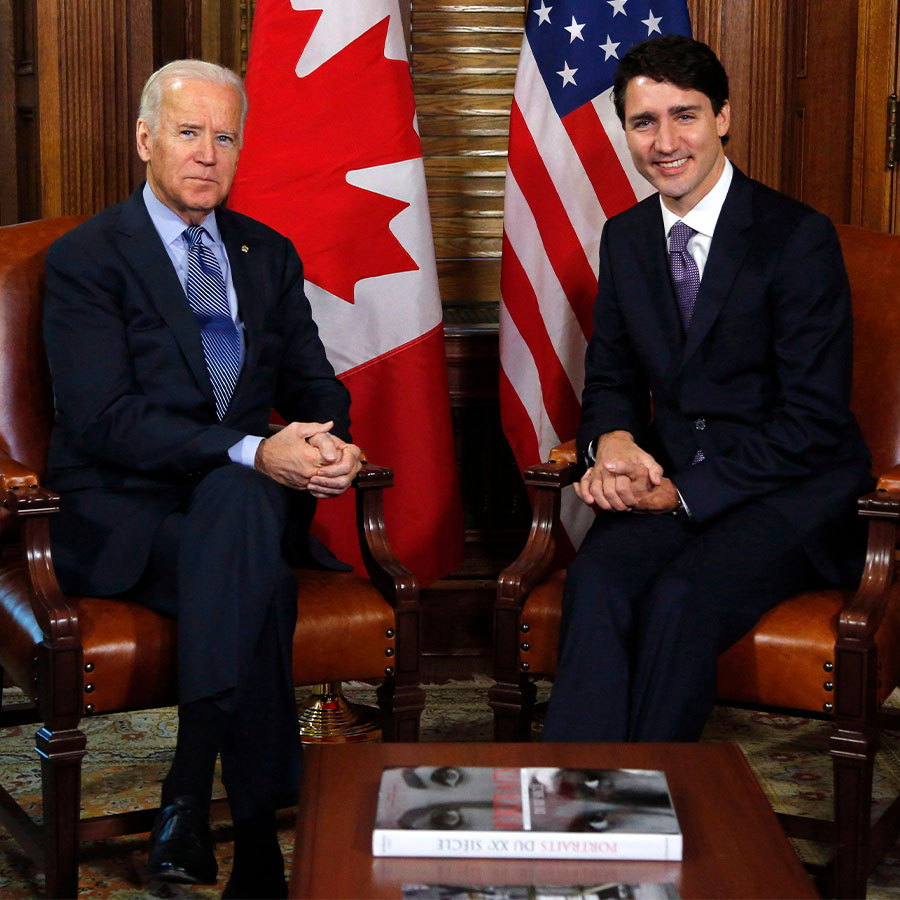 Prime Minister Justin Trudeau, pictured here with then U.S. Vice-President Joe Biden on Parliament Hill in Ottawa on in Dec., 2016, will lean on shared values with the new President to renew relations between the two countries. THE CANADIAN PRESS/Patrick Doyle

U.S. President Joe Biden’s first few days on the job, including the phone call he had with Prime Minister Justin Trudeau last Friday, reminds all of us how an American leader should look and act.

The Biden and Trudeau phone call produced no  earth-shattering revelations or surprise measures. According to the government Readout, the two spoke about working together to address environmental concerns, defeat COVID-19 and ensure that the economic recovery unfolds quickly, among other things.

While this isn’t exactly stop-the-press news, it does mark a welcome change in the way Canada’s and America’s  leaders have conducted business over the last four years. Over that period, this hugely important friendship had frayed to the point of petty personal bickering and showed no sigs of improving.

Biden’s cancellation of the Alberta-owned Keystone XL Pipeline, which he did on his first day in office by rescinding a presidential permit that allowed cross-border construction, is illustrative of this new dovish tone in the White House. While Trudeau told Biden he was “disappointed” with the move, it doesn’t seemed to have soured relations between the two countries, as it certainly would have under Trump. “Talk again soon, Joe,” Trudeau tweeted,  showing that, despite differences, the two leaders will still be able to work together.

This low-key civil approach is very much in keeping with how Biden has always operated. Unlike his predecessor, he doesn’t go in for demagoguery or personal vendettas. Instead, he comes across as a hard-working politician who doesn’t have time to waste on pumping up his ego or winning minor points. This tweet from Biden’s first day on the job speaks volumes of how America’s new president plans to conduct business.

It sends a message to the rest of the world that America finally has a serious leader who is ready to roll up his sleeves to address pressing domestic issues. And after years of looking inwardly, the country is once again ready to assume its once prominent role on the global stage.

Yes, things are going to be noticeably different at the White House. Here are five ways this transformation might play out and what it will mean to Canada and the rest of the world.

1 Improving Canadian-U.S. Relations Trump used his “America First” policy as a weapon to punish allies and trading partners – including Canada – and force them to accept U.S.-friendly terms. Right from his first awkward handshake with Prime Minister Justin Trudeau in Washington in 2017, it became evidently clear that these two leaders would never hit it off. Railing against Canada’s protectionist trade policies, Trump tore up the NAFTA agreement and imposed punitive tariffs on aluminum and steel imports until Canada agreed to sign a new one. His history of petty personal attacks on the prime minister greatly diminished the relationship between the two countries and was a constant source of diplomatic and economic tension.

How Will It Change? The fact that Biden decided that his  first phone call to a foreign leader would be to Trudeau sends a clear signal that the uneasy relationship between the two countries is on the rebound. The two already know what to expect with each other, having met in 2016 when Trudeau had just won his first election and Biden was completing his eight years as Obama’s VP.  “We are much more aligned on values, on focus, on work that needs to be done to give opportunities for everyone while we build a better future,” Trudeau said of his phone call to the U.S. leader. Now that the two countries are “renewing their deep and enduring friendship,” Trudeau will be in a better position to leverage U.S. power and bring about the release of Michael Kovrig and Michael Spavor, the two Canadians held in arbitrary detention in China.

How Will It Change? Only an unbalanced leader would conduct foreign policy in this manner. Biden has already served notice that he will make future foreign policy decisions only after listening closely to the advice of his cabinet, including new Secretary of State Antony Blinken and empower a beleaguered diplomatic corps that was mostly ignored or belittled by his predecessor. And by repairing relations with the World Health Organization and rejoining the Paris Climate agreement, he has served notice that America is willing to work with the rest of the world in partnership to solve pressing health and environmental issues.

3 Cooling the Chaos Remember Anthony Scaramucci? He lasted all of 11 days as Trump’s communications director. Scaramucci’s quick demise characterized the constant chaos in the White House as Trump burned through advisers, setting a modern record for turnover of political appointees. Former friends, business associates or supporters – Kellyanne Conway, Michael Flynn, John Bolton, Sean Spicer (the list is endless) were all booted from their posts for disagreeing with their boss’s political or personal agenda. Because of the toxic environment and random dismissals, many quality civil servants were replaced by lackeys, yes-men or family members.

How Will It Change? The revolving cast of characters in Trump’s White House meant that America had no consistent foreign or economic policy. It’s inconceivable to think the turnover rate under Biden will be a fraction as high as it was during Trump’s reign. He will no doubt build a cabinet on experience and qualifications and not choose advisers on their ability to close their eyes and nod their heads.

4 Restoring Respect A spiteful and vindictive figure from Day 1, Trump’s bellicose behaviour grew even worse after his first impeachment, which he viewed as an underhanded effort to remove him from office. As time wore on, his public statements became overwhelmingly negative, mean-spirited, divisive and delusional, culminating in his extraordinary ban from all social media for denying the results of the U.S. election and inciting the riot on the Capitol. Such publicly boorish behaviour was unprecedented among American presidents and greatly lowered the prestige of the White House. Criticized by world leaders, mocked on social media and lampooned mercilessly by late-night comedians, Trump completely denigrated this once-respected office.

How Will It Change? It’s unlikely that Biden will use his position as leader of the free world to inflate his ego, gaslight opponents or settle old scores. His public tone has already been far more civil, and he has promised to use his position to unify, rather than divide, his country and to “restore the soul and to secure the future of America.”

5 A New Civility With Trump constantly stirring up the pot – and opponents screaming for his head – the level of political noise and drama became unbearable.  Whether it was congratulating himself, stoking racial tensions, settling a score or poking the eye of establishment, every day it seemed Trump would say something shocking with the explicit aim of pumping up his rabid base and provoking the opposition. The entirely unproductive goal of all this noise was to put him at the centre of the news cycle for that day.

How Will It Change? Biden’s time as senator and his eight years as vice-president suggests he will adopt a much, much quieter leadership approach, a welcome change from the noisy tempest that Trump fostered on a daily basis. If, as Biden promised in his inaugural address, he successfully convinces people on both sides of the political spectrum to “join forces, stop the shouting and lower the temperature,” he will endear himself to those who have grown weary of America’s unending “uncivil war.”