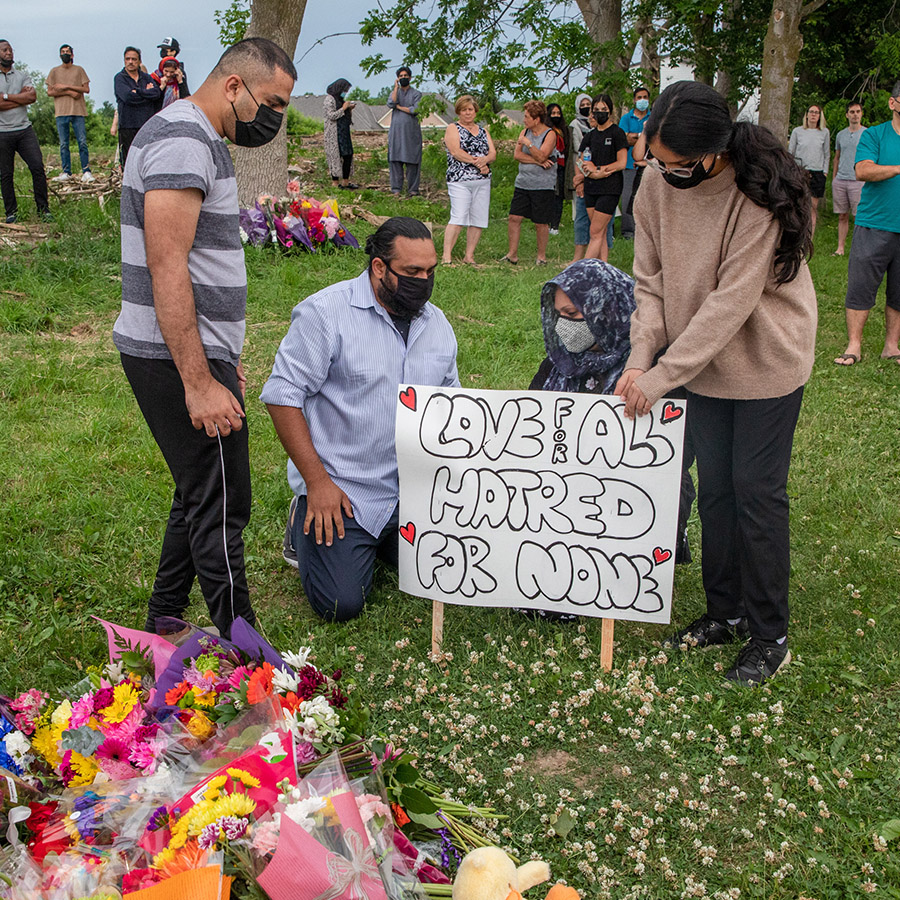 People attend a memorial at the location where a family of five was hit by a driver, in London, Ontario on June 7, 2021. Four of the members of the family died and one is in critical condition. Photo: Brett Gundlock/Anadolu Agency/Getty Images

Prime Minister Justin Trudeau on Tuesday promised to take more action to dismantle far-right groups after a hate-motivated attack that killed four members of a Muslim family in the city of London, Ontario.

“This was a terrorist attack, motivated by hatred, in the heart of one of our communities,” Trudeau said in the House of Commons after observing a moment of silence.

The family, killed on Sunday when a pickup truck jumped the curb and ran them over, were deliberately targeted because of their religion, Canadian police said.

“We’ll continue to fight hate online and offline … (including) taking more action to dismantle far-right hate groups, like we did with the Proud Boys by adding them to Canada’s terror listing,” said Trudeau, who is due to attend a vigil outside the London Muslim Mosque for the victims later on Tuesday.

Police in London arrested Nathaniel Veltman, 20, in a parking lot about three-tenths of a mile (500 meters) from the London Muslim Mosque. He was wearing a body-armor type of vest. Veltman, who is white, has been charged with four counts of first-degree murder. Authorities are reviewing the possibility of terrorism charges.

The attack was the worst against Canadian Muslims since a man gunned down six members of a Quebec City mosque in 2017. London Mayor Ed Holder said it was the worst mass murder in his city’s history.

In September 2020, Mohammed Aslam Zafis, a Muslim man, was stabbed to death outside a Toronto mosque. Police charged a 34-year-old man with murder.

In February, Canada designated the far-right Proud Boys group a terrorist entity, saying it posed an active security threat after the January assault on the U.S. Capitol in Washington.

Although the group has never mounted an attack in Canada, officials said domestic intelligence forces have become increasingly worried about it.

(Reporting by Steve Scherer, David Ljunggren in Ottawa and Carlos Osorio in London; Editing by Amran Abocar and Will Dunham)