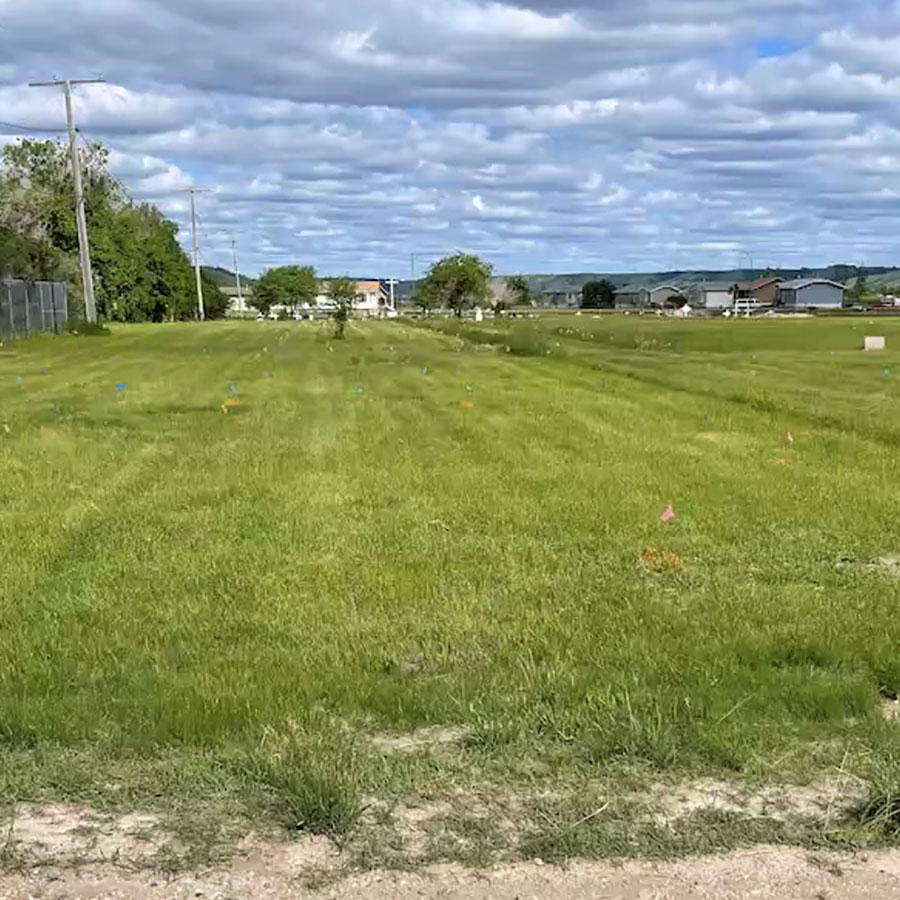 A field near the former Marieval Indian Residential School, where the Cowessess First Nation say they found the unmarked graves of hundreds of people, is seen near Grayson, Saskatchewan. Photo: Federation of Sovereign Indigenous Nations / Handout / Reuters

Justin Trudeau has released a statement in response to the Cowessess First Nation’s discovery of 751 unmarked graves at a cemetery near the former Marieval Indian Residential School in Saskatchewan.

“My heart breaks for the Cowessess First Nation following the discovery of Indigenous children buried at the former Marieval Residential School,” Trudeau tweeted Thursday afternoon. “We cannot bring them back, but we will honour their memory and we will tell the truth about these injustices.”

In a second tweet Trudeau said “I know these findings only deepen the pain that families, survivors, and all Indigenous communities are already feeling,” before directing Indigenous peoples struggling with the discovery to the Residential School Crisis Line.

With the grim news following the discovery of 215 unmarked graves at the Kamloops Residential School in British Columbia in May, Trudeau also spoke of the discovery as a “larger tragedy.”

“They are a shameful reminder of the systemic racism, discrimination, and injustice that Indigenous peoples have faced — and continue to face — in this country,” he said in a statement posted online. “And together, we must acknowledge this truth, learn from our past, and walk the shared path of reconciliation, so we can build a better future.”

At a press conference on the finding Thursday morning, Federation of Sovereign Indigenous Nations (FSIN) Chief Bobby Cameron called what happened in residential schools in Canada a “crime against humanity,” adding that the discovery was likely only the beginning in Saskatchewan.

“There will be hundreds more unmarked graves and burial sites located across our First Nations land at the sites of former Indian Residential Schools,” Cameron said in a prepared statement.

“There are thousands of families across our Treaty territories that have been waiting for their children to come home. Saskatchewan had the highest number of residential schools and highest number of survivors.”

In a statement shared to Twitter, Scott Moe said he had spoken to Cameron and Cowessess First Nation Chief Cadmus Delorme and offered the full support of the provincial government.

“Sadly, other Saskatchewan First Nations will experience the same shock and despair as the search for graves across the province continues,” the statement reads. “We are grateful for the work indigenous leaders are undertaking and will continue to unwavering support as we work together to help bring closure to survivors, families and communities in our province.”

An indigenous group in Canada’s Saskatchewan province on Thursday said it had found the unmarked graves of 751 people at a now-defunct Catholic residential school, just weeks after a similar discovery rocked the country.

Prime Minister Justin Trudeau said he was “terribly saddened” by the new discovery at Marieval Indian Residential School about 87 miles (140 km) from the provincial capital Regina.

He told indigenous people that “the hurt and the trauma that you feel is Canada’s responsibility to bear.”

It is not clear how many of the remains detected belong to children, Cowessess First Nation Chief Cadmus Delorme told reporters.

He said the church that ran the school removed the headstones.

“We didn’t remove the headstones. Removing headstones is a crime in this country. We are treating this like a crime scene,” he said.

The residential school system, which operated between 1831 and 1996, removed about 150,000 indigenous children from their families and brought them to Christian residential schools run on behalf of the federal government.

“Canada will be known as a nation who tried to exterminate the First Nations. Now we have evidence,” said Bobby Cameron, Chief of the Federation of Sovereign Indigenous Nations, which represents 74 First Nations in Saskatchewan.

“This is just the beginning.”

Canada’s Truth and Reconciliation Commission, which published a report that found the country’s residential school system amounted to cultural genocide, has said a cemetery was left on the Marieval site after the school building was demolished.

Cowessess First Nation has been in touch with the local Catholic archdiocese and Delorme said he is optimistic they will provide records allowing them to identify the remains.

“We have full faith that the Roman Catholic Church will release our records. They haven’t told us ‘No.’ We just don’t have them yet.”

The Cowessess First Nation began a ground-penetrating radar search on June 2, after the discovery of 215 unmarked graves at the Kamloops Residential School in British Columbia outraged the country.

The Kamloops discovery reopened old wounds in Canada about the lack of information and accountability around the residential school system, which forcibly separated indigenous children from their families and subjected them to malnutrition and physical and sexual abuse.

Pope Francis said in early June that he was pained by the Kamloops revelation and called for respect for the rights and cultures of native peoples. But he stopped short of the direct apology some Canadians had demanded.

No Longer “The Disappeared”: Remembering the 215 Children Found at Kamloops Indian Residential School