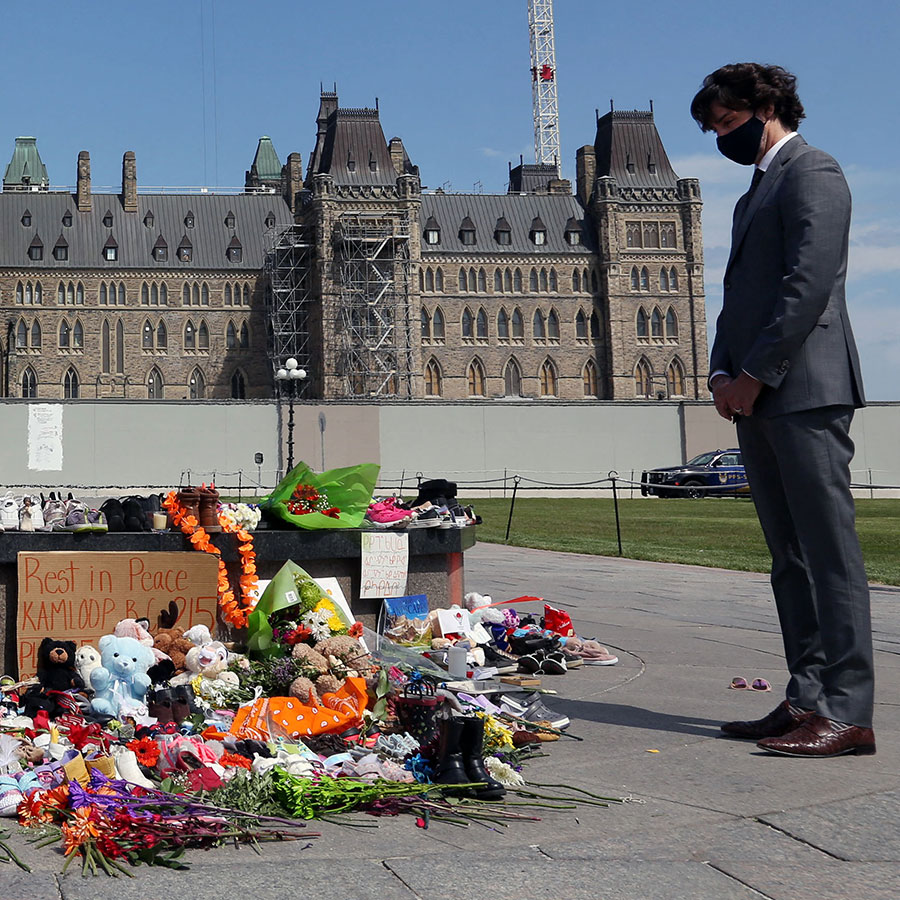 In a message to Canadians on Canada Day, Prime Minister Justin Trudeau urged the nation to mark the occasion with celebration while at the same time reflecting on how we can heal our  broken relations with Indigenous peoples.

“Today, we celebrate our country and everyone who calls it home. We also reflect on everything we have accomplished, and look forward to what more we have to do,” Trudeau said.

“The horrific findings of the remains of hundreds of children at the sites of former residential schools in British Columbia and Saskatchewan have rightfully pressed us to reflect on our country’s historical failures, and the injustices that still exist for Indigenous peoples and many others in Canada. We as Canadians must be honest with ourselves about our past. And we must recognize that here in Canada there are still people who don’t feel safe walking the streets of their communities, who still don’t have the same opportunities as others, and who still face discrimination or systemic racism in their daily lives.”

However, the prime minister closed on an optimistic note, saying that, through mutual cooperation and and understanding, we can create a just society for all.

“This Canada Day, let’s recommit to learning from and listening to each other so we can break down the barriers that divide us, rectify the injustices of our past, and build a more fair and equitable society for everyone. Together, we will roll up our sleeves and do the hard work that is necessary to build a better Canada.”

Canada Day is usually a day of celebration, when everyone reflects with pride and gratitude on how lucky we are to live in such a peaceful and prosperous nation.

However, in light of the horrifying discoveries of remains buried at residential schools in Kamloops, B.C., Marieval, Sask., and, most recently, Cranbrook, B.C. — and with the distinct possibility that more grave sites will be uncovered — many Canadians feel that, perhaps this year, the usual patriotic flag-waving Canada Day events would be in poor taste.

As a result, as many as 50 cities and communities across the country — including Victoria, Vancouver, Yellowknife, Iqaluit, Guelph, Thunder Bay, Fredericton and Dartmouth — have decided to forgo virtual Canada Day celebrations in order to reflect on the terrible atrocities that have been committed against Indigenous people since our founding. Other cities will go ahead with planned virtual ceremonies, but will use them as an opportunity to reflect on our nation’s painful past.

Idle No More, a protest group comprising many Indigenous groups, is the leading voice behind the #CancelCanadaDay social media movement and plans to hold peaceful protest in cities across the country, holding banner drops, sit-ins, round dances, ceremonies, marches and rallies to promote the message that “Canada remains a country that has built its foundation on the erasure and genocide of Indigenous nations.” The group is encouraging all Canadians to wear orange on July 1 as a visual symbol to remember the victims of the residential school system.

The controversy surrounding Canada Day has not only cast a pall over celebrations but it has also sparked a painful public discussion about our shameful treatment of Indigenous people. Let’s hear from some of the leading voices in our country, who’ve shared their perspectives on this difficult issue in recent days.

Prime Minister Justin Trudeau: “Many, many Canadians will be reflecting on reconciliation, on our relationship with Indigenous Peoples and how it has evolved and how it needs to continue to evolve rapidly. We have so many things we need to work on together and I think this Canada Day, it will be a time of reflection on what we’ve achieved as a country but on what more we have to do.”

Sylvia McAdam, Co-Founder of Idle No More: “Cancelling Canada Day is the bare minimum recognition of the ongoing colonization and genocide perpetrated against Indigenous peoples … The genocide of so-called residential ‘schools’ never ended. It continues today.”

David A. Robertson, Indigenous novelist: “We need to recognize there is nothing to celebrate about this country right now.”

Erin O’Toole, Conservative Party Leader: “I’m concerned that injustices in our past or in the present are too often seized upon by a small group of activist voices who use it to attack the very idea of Canada itself. We are seeing news this week of Canada Day celebrations being cancelled. Canada Day, our day of celebration, when Canadians of every background come together to give thanks for living in the greatest country in the world.”

Gabrielle Fayant, Co-Founder of Assembly of Seven Generations:  “I hope Canadians can put their pride aside for one day. Solidarity with others means sometimes you have to sacrifice something, sacrifice a day. That’s really not that much to ask for.”

Jagmeet Singh, NDP Leader: “While there’s things that we can be proud of, absolutely, there are things that are really horrible, and that are a part of our legacy. It does us a disservice when we ignore the injustice, we ignore the bad parts of our history and the ongoing legacy and the impact of those horrible things that have happened, and continue to happen.”

Kate Rogers, Mayor of Fredericton: “Although there is much that we can take pride in as a Canadian, a quiet time of reflection is exactly what is needed this Canada Day to pause, acknowledge our past and think about what it really means to be a Canadian and an ally to Indigenous peoples.”

John Boudrias, Grand Chief of the Algonquin Anishinabeg Nation, Quebec: “I will be disappointed that people can actually celebrate during this time of mourning.”

Sol Mamakwa, Ontario MPP from the Kingfisher First Nation: “I will not celebrate with picnics and fireworks. I’ll spend the day reflecting, remembering all we have lost and how to move forward.”

Lisa Helps, Mayor of Victoria: “The more we reflect, the more we understand that holding the usual Canada Day celebrations could be damaging to the city’s and the community’s reconciliation efforts.”

Scott Moe, Premier of Saskatchewan: “On this Canada Day, in particular, I think I will also be reflecting much more than I have on other Canada Days as to our history — both our positive history in this nation, but also our history that is not so positive and quite negative.”

Mallory Solomon, Oshkaatisak Council Member from Constance Lake First Nation, Ontario: “As a nation of Indigenous Peoples, we must stand strong and shout this out to the rest of Canada. This country’s true history is finally being revealed, and it’s time to stand together and demand justice and accountability.”

Brian Pallister, Premier of Manitoba: “I don’t think denying Canada Day celebrations is a respectful way for us to move forward. I think we should celebrate our country but celebrate it with its warts too.”

Ellis Ross, B.C. MLA and Haisla Nation member: “When we’re talking about this [cancelling Canada Day], I got to keep coming back to the idea of what does this do in practical terms to keep Aboriginals from being the biggest population in our prisons in Canada? What does it do to be, per capita, the highest rates of suicide in Canada. Per capita, the largest number of kids going into government care, and the largest group of people living in poverty and unemployed? What does it do? It doesn’t do anything.”

Tom Urbaniak, political science professor at Cape Breton University: “My respectful advice would be to keep Canada Day. Do not cancel it, but use it as an occasion to reflect on who we are as a country and where we’re going together.”

Isabelle LeBlanc, Communications Director, City of Moncton: “Our flag-raising ceremony will take place. However, we expect the annual celebration to be much more solemn this year.”

No Longer “The Disappeared”: Remembering the 215 Children Found at Kamloops Indian Residential School