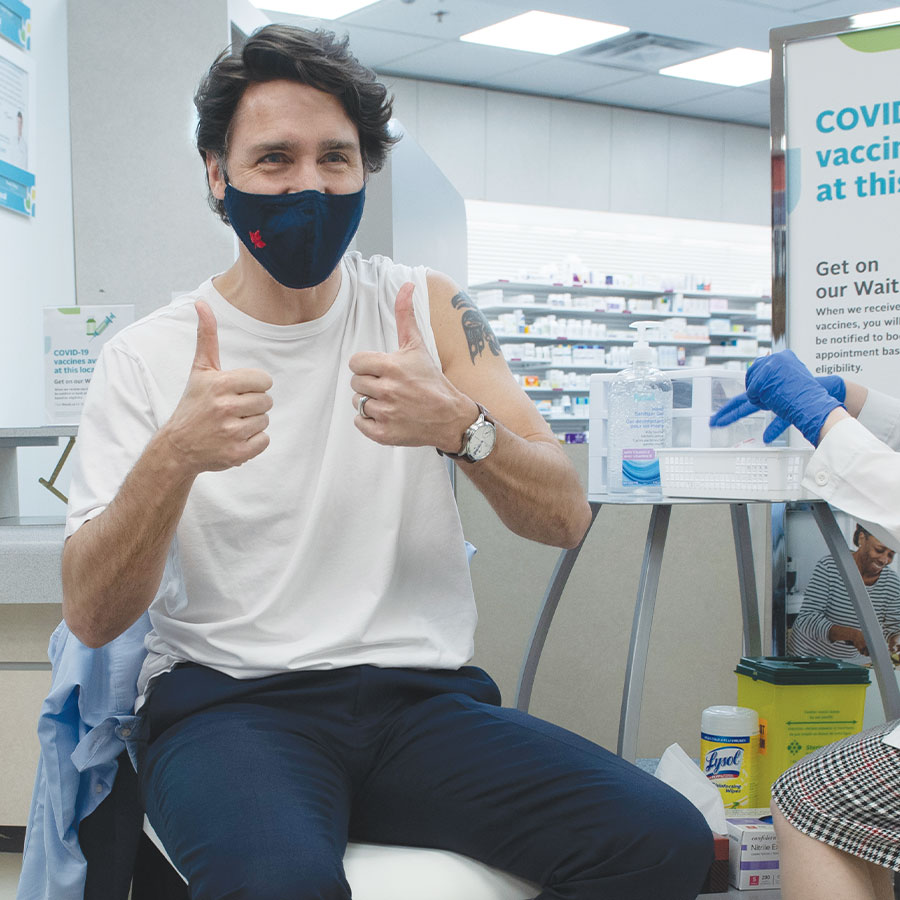 Prime Minister Justin Trudeau, shown here giving a thumbs up after receiving his first vaccine dose in April, is expected to call a fall election, when the majority of Canadians will be fully vaccinated and can safely hit the polls. Photo: Adrian Wyld/The Canadian Press

In early June, Justin Trudeau described the “amazing feeling” that came over him when he received his first COVID-19 vaccine. The Entertainment Tonight Canada interview, which went viral, shows the amped-up prime minister urging everyone — including “that crusty old uncle” — to roll up their sleeves.

Trudeau has good reason to feel ecstatic these days. With the third wave of COVID-19 waning and inoculation campaigns rolling out across the country, he may be confident that, by calling an election two years into his minority mandate, he’ll be able to secure the majority government he so desperately wants. All signs are pointing to a fall election, when the majority of Canadians will have received both vaccine shots and can safely go to the polls.

Buoyed by a strong showing at the G7 and NATO summits in Europe in the spring, the promise of relaxed restrictions in a “two-dose summer,” and the inability of opposition parties to capture voters’ attention, Liberal strategists are mulling the right time to drop the writ. The party is playing up Trudeau’s burnished credentials as an international player — after he took the lead at the June G7 meeting in London on key global issues, like delivering vaccines to developing countries — and positioning him as “dean” of the G7. When German Chancellor Angela Merkel steps down in December, he’ll be the longest-serving G7 leader. He’s come a long way from the “just not ready” label the Conservatives tried to pin on him in 2015 election ads.

In July, CBC’s Poll Tracker (an aggregation of publicly available polls) showed the Liberals ahead with 35.2 per cent, the Tories at 28.4 per cent, the NDP at 19 per cent and the Bloc Québécois and Greens down in the six per cent range.
Along with his rebounding political fortunes, Trudeau’s personal reputation received a much-needed boost in May when the ethics commissioner found neither he nor his family had violated any conflict-of-interest laws in their controversial dealings with the WE Charity. He’s since earned praise for his compassionate response to the shocking discovery of unmarked graves on the grounds of residential schools in B.C. and Saskatchewan, although critics point out the $27 million earmarked in the 2019 budget to help Indigenous communities locate and commemorate the children who died at former residential schools came five years after the Truth and Reconciliation Commission report. However, his appointment of Mary Simon as the first Indigenous Governor General should heal some of those wounds and may mitigate the criticism about his treatment of Indigenous politician Jody Wilson-Raybould whom he fired as justice minister after they clashed over the SNC-Lavalin affair.

Along with his ability to read the mood of the country and pivot when public opinion shifts, Trudeau was a calm and unifying force in the early days of the pandemic, when public health information was scarce, contradictory and confusing. On March 13, 2020, two days after the World Health Organization declared COVID-19 a pandemic and a day after his wife tested positive for the novel coronavirus, Trudeau stepped up to a podium outside his Rideau Cottage residence and addressed the fear. “I know that you’re worried,” he said. “You’re worried about your health, about your family’s health, about your job, your savings, about paying rent, about the kids not being in school.” He appeared daily, rain or shine, between March and July, cementing his “we’ve got your back” messaging.

His government was quick to address financial worries with an $82-billion aid package announced March 18 (as well as another $100 billion in November). Meanwhile, world leaders like former U.S. president Donald Trump — who downplayed the virus’ lethality — and British Prime Minister Boris Johnson — who initially delayed lockdowns to prevent “behavioural fatigue” — stumbled badly and failed to instill confidence in their citizens.

While the provincial premiers tried to follow Trudeau’s lead, they failed to garner the same support and bore the brunt of disgruntlement at the slow rollout of vaccines and confusing pandemic restrictions. Their fumbles (Ontario Premier Doug Ford’s humiliating “we got it wrong” press conference in April and Alberta Premier Jason Kenney’s ill-advised, rooftop booze-up in June) made them easy targets, while the prime minister escaped relatively unscathed. When we were preoccupied with rising case counts and death tolls, burning issues like Western alienation and massive government spending seemed inconsequential. Then, as the third wave gripped the country, U.S. President Joe Biden killed the Keystone XL pipeline expansion that would have brought Alberta tar sands oil to Nebraska — and had pitted environmentalists against the oil and gas industry — tossing another political football out of bounds.

When Finance Minister Chrystia Freeland released the federal budget in April, it silenced critics who accused the Liberals of excessive spending without a concrete fiscal plan. Packed with goodies for key interest groups — a national subsidized child-care program for working women, the extension of pandemic relief programs for unemployed workers and battered businesses, and major investments in sustainable technology for the green lobby — Freeland’s strategic largesse had the trappings of a pre-election budget.

The finance minister, of course, didn’t pitch it that way. In her budget speech to the House of Commons, she said the government’s three-year pandemic recovery plan, which will create a $154-billion deficit next year (the second largest in Canada’s history), is more about “healing the economic wounds left by the COVID recession” and “creating more jobs and prosperity” than currying favour with voters.

While Tory leader Erin O’Toole criticized Freeland for failing to rein in spending, his fiscal prudence hasn’t lit a fire with Canadians, especially among those who are getting government support. He has since resorted to hammering Trudeau on the China file as well as the government’s clumsy handling of internet regulation legislation. And, as O’Toole struggles to find his voice, he must mollify his party’s increasingly restive base of social conservatives and Westerners. He may not even be able to count on those “crusty old uncles,” who seem destined to cast votes for Maxime Bernier’s People’s Party, a development that further solidifies the Liberal’s majority government calculus.

With the Conservatives scrambling to find issues that excite potential supporters and the NDP failing to distinguish their platform from that of the Liberals, it is uncertain whether senior voters will support the Liberals, as they have done in two previous elections. These 6.8 million Canadians take their voting privileges seriously, and this bloc has the might to swing an election.
“C.A.R.P. members feel that the government has sidelined them during this pandemic, either by ignoring their financial concerns or failing to address the terrible situation in our long-term care homes,” says Bill VanGorder, the chief policy officer at C.A.R.P.

He applauds two big senior-friendly budget items, the $3-billion investment in long-term care and the 10 per cent increase in Old Age Security for seniors over 75 — which will put up to $766 a year in pockets — as well as a one-time $500 payment in August for OAS recipients who will be 75 or more as of June 2022.

“But what happened to the national pharmacare plan?” he asks, noting a key Liberal election promise has “lost momentum” in the wake of the big-ticket child-care program. VanGorder also feels the budget lacked initiatives that would boost seniors’ financial security, such as eliminating mandatory RRIF withdrawals, developing a federal insurance program that would guarantee 100 per cent of pension payments when a company declares bankruptcy, or improving protection for small investors.

In a post-budget call with Seniors Minister Deb Schulte, VanGorder pressed her to act quickly, particularly on improving long-term care. “Our members have been waiting a long time for action,” he says, and that’s how to get the seniors vote.

After getting a fresh new haircut and shaving off the beard, Trudeau looks very much like a politician who’s ready to face voters.

Should he have any lingering doubts about whether or not to call an election, all he has to do is look back on his family’s political history.

In 1974, during a recession with high unemployment, his father called an election two years into his minority government and Canadians handed Prime Minister Pierre Elliott Trudeau a majority.

No wonder Justin is feeling giddy.

A version of this story appeared in the August/September Issue with the headline “Election Euphoria,” p. 26.