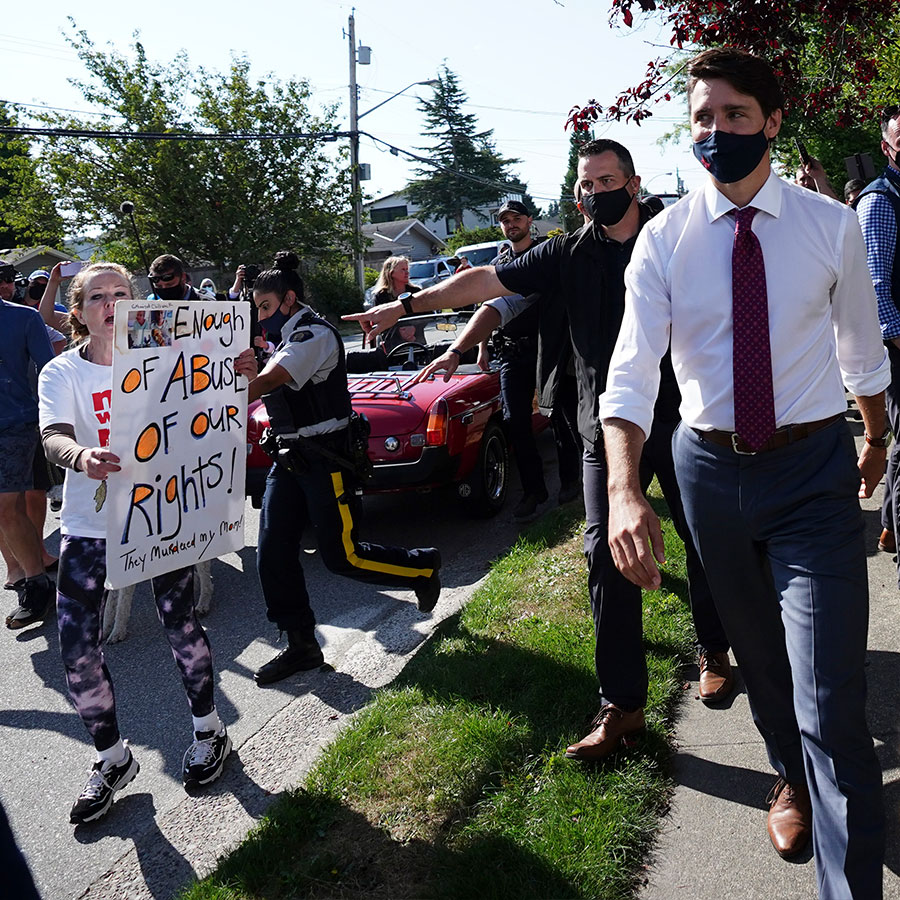 Prime Minister Justin Trudeau is seizing on the campaign protests to give some much needed life to his struggling campaign. Photo: Sean Kilpatrick/The Canadian Press

The angry mob scenes that have followed Prime Minister Justin Trudeau during two recent campaign stops may actually be adding some much-needed life to the Liberal Leader’s struggling re-election campaign.

On Friday, Trudeau was forced to cancel a rally in Bolton, Ont., after his security detail felt it was unsafe to continue. There were signs denouncing the Liberal Leader’s support of vaccines passports and lockdowns, rude gestures and expletive-laden rants.

A similar group showed up at his next stop in Cambridge, Ont., blaring sirens to drown out his message and calling to “lock him up” for “treason.”

While these scenes are familiar to anyone who has watched the past two U.S. election campaigns, Canadians usually don’t go in for these sorts of disruptive mob events.

The reaction from the media and much of social media has been sympathetic towards Trudeau — perhaps the first such moment in an election campaign that has been marked by general negativity at the Liberal Leader for calling the election in the first place.

Trudeau has seized the opportunity to capitalize on this for political gain. Take a look at how his messaging has evolved during the protests. After the first protest, he sounded almost apologetic for the crowd’s over-the-top reaction.

But after the second protest, in Cambridge, the apologetic tone had disappeared, replaced by a more defiant message. “I’m not going to back down on a message that Canadians know is the right path forward, and that’s why Canadians need to choose to move Canada forward in this pivotal time,” Trudeau said.

He even got off a nice crack, which became instantly popular on social media, when the protestors tried to drown his speech out with a siren.

Besides refusing to back down, Trudeau has successfully managed to re-cast the protests as an “us against them” moment. The “us” being the majority of Canadians who are in favour of masking and vaccination mandates; the “them” being scary U.S.-style protestors who aren’t.

“You know what? If you don’t want to get vaccinated that’s your choice, but don’t think you can get on a plane or a train next to vaccinated people and put them at risk,” Trudeau said.

Adding fuel to the fire is a recent Liberal attack ad that criticizes Conservative Leader Erin O’Toole who “won’t listen to the experts on this issue. He can’t even convince his own candidates to get vaccinated. We need leadership to get us through this crisis and get the job done on vaccines. The Liberals are the only ones who can deliver that.”

Unlike Donald Trump, who would have liked nothing better than to create chaos by encouraging rowdy protestors, O’Toole, to his credit, quickly distanced himself from them.

“I don’t have any time for intimidation or harassment. It’s totally unacceptable. I strongly condemn any form of harassment and protest like we’ve seen,” he said. “We’re a democracy. We should be having a healthy and respectful debate of ideas and we have no time for people that bring in negativity to campaigning.”

As expected, the Liberals are trying to make up lost ground by creating wedge issues. Struggling to capture voters with their platform, their best chance to slow down O’Toole’s surging momentum will be to tie him to the anti-vax protests.

O’Toole’s campaign, which was sailing along smoothly until this weekend, was suddenly on the defensive. He was forced to answer questions about why he’s against mandatory vaccinations, vaccine passports, and to explain why some of his candidates appear to be inciting the protestors.

All this comes at a time when the Conservatives are desperately trying to present their leader as a suburban moderate, a “middle-of-the-road” Conservative dad with mainstream beliefs. By tying him to anti-vaccination protests, Trudeau has opened a sensitive spot that the Liberals will try to exploit.

So far O’Toole has successfully sidestepped questions about where he stands on mandatory vaccines and passports. At some point he’s going to have to clarify his position to the Canadian people.

Today, rather than providing a convincing explanation on the issue, he tried to change the channel by posting more of the “nice-guy” stuff.

That may come off as a cute media moment but smacks of a party leader dodging the issues.

The Liberals are desperate to make vaccine opposition a campaign issue. If O’Toole wants to stay in his new position atop the polls, he would be wise to stop posting pooch photos and explain to Canadians where he stands on what’s quickly becoming an important election issue.