“We’re in a Different World”: 20 Years Later, the Lasting Impact of the 9/11 Terrorist Attacks on Canada and Our Soldiers 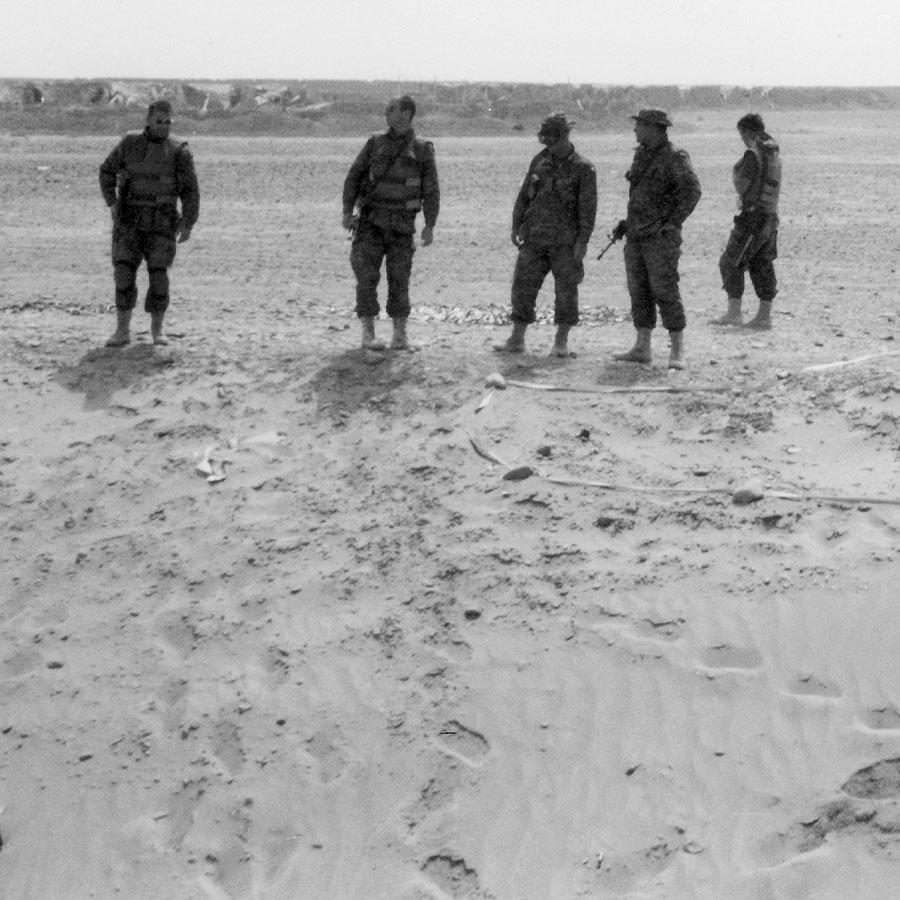 The summer of 2021 gave the world a reversal of history. In August, the last of NATO forces exited Afghanistan and Taliban insurgents retook the country just weeks before the anniversary of the attack that triggered this 20-year war a warm September day over New York City, the Pentagon and a field in Pennsylvania. The terrorist attacks — masterminded from Afghanistan by Osama bin Laden — took place on Sept. 11, 2001. In addition to the horrors unfolding in America, that day also forever changed thousands of Canadian lives — including those in the military. Contributor Ted Barris remembers 9/11 through the memories of several Canadians who fought in the war in Afghanistan.

Canadian Lt. Jeff Peck had pretty much become familiar with the friendly heckling that MCpl. Marc Léger threw at him when they were off-duty, calling his superior officer “Lt. Pecker.” The two had deployed to Austria in 2001 for a “partnership for peace” training exercise among NATO countries such as the U.S., Britain, Croatia and Turkey and met on a break in the barracks. The place was in an uproar. A passenger jet had plunged into the World Trade Center in New York. And as the realities of the terrorist attacks on U.S. soil became clear, on Sept. 11, Léger told Peck: “We’re in a different world now.”

They would soon learn that 24 Canadians died when two passenger planes hit and collapsed the twin towers that day — and also learn of the attack on the Pentagon and how a fourth hijacked plane landed in a Pennsylvania field — and, the following morning, that Canadian Prime Minister Jean Chrétien had telephoned U.S. president George W. Bush to pledge “Canada’s complete support,” including diplomatic and military forces at sea, in the air and on the ground. As well, virtually without hesitation, hundreds of Canadian fire fighters raced to the scene of the attacks in New York to support their American counterparts.

Though oddly, as quickly as Canada appeared ready to assist its closest ally,  nine days later, when the president addressed both houses of the U.S. Congress, Bush opened his speech with praise for allies around the world, “from Buckingham Palace … the streets of Paris … Berlin’s Brandenburg Gate,” as well as South Korea, Egypt, Mexico and El Salvador. There was no mention of Canada. In a National Post story, 10 years later, Bush speechwriter David Frum, a Canadian, explained that, “We just … forgot.”

By February 2002, Canadian Forces had boots on the ground in Afghanistan, where intelligence revealed Osama bin Laden, the leader of Al-Qaeda and mastermind of the 9/11 attacks, was based. Within weeks, NATO forces had chased bin Laden and the Taliban into the mountains. Canadians then received permission from the U.S. Army task force in Afghanistan to use Tarnac Farm, bin Laden’s former training base outside Kandahar, to orient incoming troops. About 10 o’clock, on April 18, 2002, three platoons of 3rd Battalion, Princess Patricia’s Canadian Light Infantry — about 30 troops at a time — began rotating through a live-fire training exercise.

“We had to wait until it was dark because we were using night-vision goggles,” said Peck in an interview; he was 27 at the time. “The exercise took about an hour for my platoon. Then we moved back to a waiting area … when it happened.”

Mistaking the Canadians for insurgents, Maj. Harry Schmidt, a U.S. Air National Guard fighter pilot, dropped a 225-kilogram bomb on them. Sgt. Bill Wilson, then a 34-year-old Canadian Forces medic, sat in his Bison ambulance a few hundred metres from the blast.

“I flew out of the ambulance so fast,” Wilson said in an interview. “I left my helmet and rifle behind.” In the next few minutes, Wilson made a vital decision that saved lives that night. “There are three things you can do to save a soldier’s life,” he explained. “Open up their airway [so they can breathe], use a needle to decompress a collapsed lung and use a tourniquet to prevent bleeding to death.”

Junior medic Jean de la Bourdonnaye, known as DLB, applied a tourniquet to Sgt. Lorne Ford’s leg above a shrapnel wound that had blown out an artery. Otherwise he would have bled to death. Wilson and his team managed to triage, treat and load all the wounded aboard Blackhawk helicopters and Bison ambulances in 54 minutes; all the wounded survived.

Not sure what had happened, Peck’s reflexes, like Wilson’s, kicked into threat analysis. Had Canadian weaponry malfunctioned? Had a mine gone off? Was it a Taliban attack? Peck did a head count of his platoon, then deployed it to secure the casualty area, using glow sticks to mark where wounded men (or body parts) lay.

“The bomb hit inside the wadi, the ditch next to the exercise,” Peck said. “A bomb like that has a danger radius of 500 metres. If it had hit on the flat of the desert, it would have been worse.” Marc Léger, who had recently been promoted to sergeant, died instantly in the explosion, as did Cpl. Ainsworth Dyer, Pte. Richard Green and Pte. Nathan Smith.

The Canadian Armed Forces, in recognition of the medics’ experience at Tarnac Farm, called on Wilson, DLB and Vic Speirs, the other junior medic who responded that night, to prepare others for future missions. Today, every medic and infantry solider who is about to deploy overseas gets a week-long Tactical Combat Casualty Care course, based on Wilson’s friendly-fire response, that prioritizes the ABCs (airway, breathing, circulation).

“I always take away the sense of validation of how we performed that night,” Wilson said. On April 18, his Remembrance Day, he’ll reunite virtually or in person — as he does every year — with Speirs, who lives in northern B.C. and DLB, who lives in Ottawa, the two medics who share his memories of that lifesaving, life-changing night.

In 2004, Maj. Harry Schmidt, the U.S. National Guard fighter pilot who dropped the bomb, was found guilty of dereliction of duty, and lead pilot Maj. William Umbach was cited for leadership failures; both apologized to the families of the Canadian soldiers after a U.S. Air Force inquiry in 2003.  In the end, Schmidt and Umbach were reprimanded by the Air Force and allowed to retire.

The Canadian Effort, At Home and Abroad

The war in Afghanistan — from 2001 to 2014 – became Canada’s longest wartime mission, the first significant operation since the Korean War, which lasted from 1950 to 1953. NATO forces managed to remove the Taliban from power and disrupt Al-Qaeda’s network in Afghanistan, allowing humanitarian groups to rebuild infrastructure and install an interim government. Canada invested $2.2 billion on development assistance in Afghanistan during the war.

More than 40,000 Armed Forces members served in Canada’s 12-year mission to Afghanistan; 165 Canadians — 158 soldiers and seven civilians — died during military operations there. The four troops killed in the “friendly fire” incident at Tarnac Farm on April 18, 2002, were Canada’s first casualties of the war.

That effort should never be forgotten, nor should the involvement of Canadian civilians back home in the aftermath of 9/11.

On Sept. 11, 2001, with thousands of civilian aircraft suddenly forced to land en route, 38 flights off the Newfoundland coast were diverted to Gander Airport. Suddenly facing the unexpected arrival of nearly 10,000 passengers, the town of 6,700 (as well as neighbouring communities) leapt into action — providing food, medical assistance and accommodation for the weary passengers from 95 different countries.

“What we consider the most simple thing in life is to help people,” Gander mayor Claude Elliott told USA Today in 2017.

Gander’s altruism sparked the imaginations of composers/lyricists Irene Sankoff and David Hein, who created the musical Come From Away. It opened on Broadway in 2017 and earned seven Tony Award nominations. The Broadway production was later filmed and premiered on Apple TV+ on Sept. 10.

Today, Maj. Peck works as legal advisor to the Canadian military’s Judge Advocate General; he still laments the loss of comrades. “They were the same as me. Young guys full of piss and vinegar. They get this chance to go do something great. They volunteer. They did it, but they didn’t come home.” But Peck admits, for his own mental health, he’s also tried to compartmentalize the friendly fire incident out of his life.

In August 2021, after the U.S. began withdrawing its troops from Afghanistan and Taliban insurgents took over the country, Canadian soldiers joined an American-led effort to evacuate refugees from Kabul Airport, helping to bring 1,477 to Canada so far.

So was the Canadian mission in Afghanistan, now gone with the pullout, worth it? Jeff Peck, 27 years in the military, remains steadfastly proud of the mission.

“We may not have won. But it’s not over,” Jeff Peck said. “When we were there … great things were done and seeds were planted. We have no idea what effect we had on all those young Afghani boys and girls. Those seeds might not grow for 10, 20 or 30 years.”

Ted Barris is a freelance journalist and broadcaster. His most recent book Rush to Danger: Medics in the Line of Fire was listed for the 2020 Charles Taylor Prize for Non-Fiction in Canada.

“Get Out Now” — Inside the White House on 9/11, According to the Staffers Who Were There

How Memories of Japanese American Imprisonment During the Second World War Guided the U.S. Response to 9/11