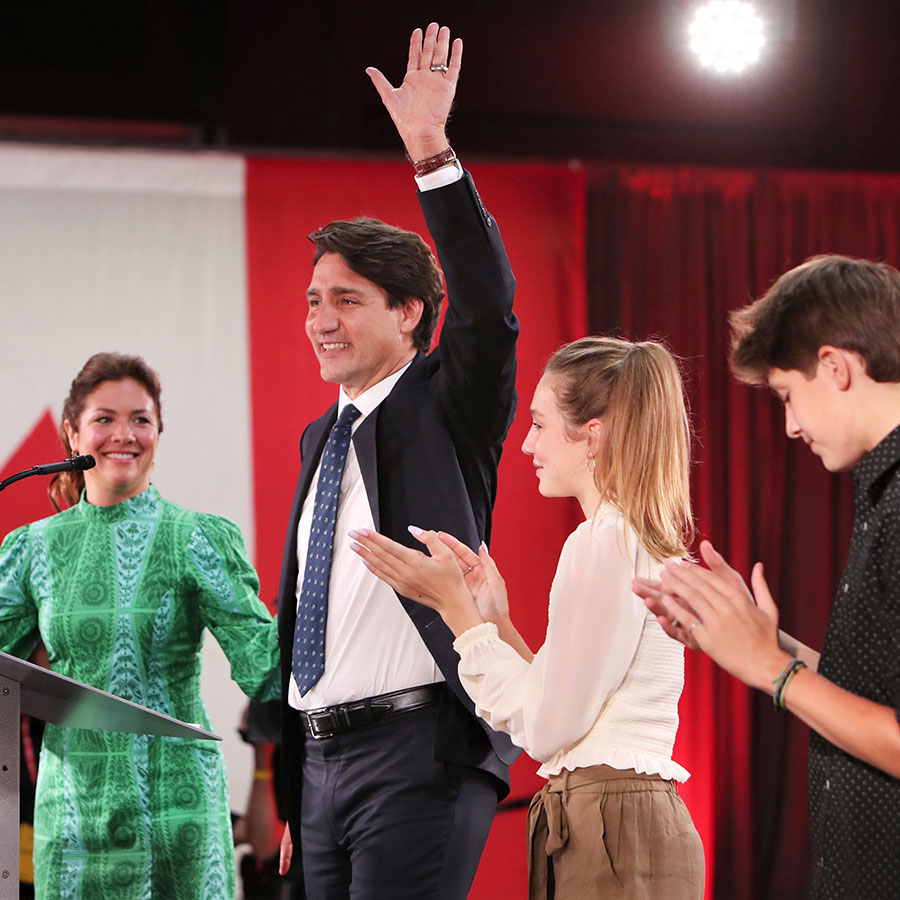 Prime Minister Justin Trudeau takes the stage with his wife, Sophie Gregoire Trudeau, and their children Xavier and Ella-Grace during a Liberal Party election night event in Montreal, in the early hours of Tuesday, Sept. 21, 2021. Trudeau won a third term in Canada's snap election but fell short of regaining the majority he was seeking, with a persistently divided electorate returning another fragmented parliament. Photo: David Kawai / Bloomberg via Getty Images

Late last night, as Prime Minister Justin Trudeau stood up before cheering supporters in Montreal to thank them for returning him back to power with a second consecutive minority government, he tried his best to convince Canadians that this election was anything but a $600 million exercise in futility.

“You are sending us back to work with a clear mandate to get us through this pandemic and to brighter days ahead,” said Trudeau, who seemed more relieved than jubilant as the results of this highly unpopular election became known.

“The moment we face demands real important change, and you have given this Parliament, and this government, clear direction,” he said.

The only “clear direction” from last night’s results, which were basically a repeat of the 2019 election, was that Canadians may want Trudeau to lead the country through its pandemic recovery years. But they aren’t at all interested in giving him a “clear mandate.”

Although counting is not final, the latest results show the Liberals elected or leading in 158 ridings, the Conservatives elected or leading in 119 ridings, the Bloc Québécois in 34, the NDP in 25 and the Greens in two. For the second election in a row, the Conservatives  won the popular vote, receiving 34 per cent as opposed to the Liberals’ 32 per cent. But the Liberal vote was much more efficient, translating into 39 more seats.

Despite the rosy face Trudeau tried to put on his party’s underwhelming returns, the Liberals are faced today with somehow convincing voters that this costly exercise was not a “failed power grab,” as Conservative Leader Erin O’Toole described it in his concession speech last night; “a selfish summer election,” as NDP leader Jagmeet Singh termed it in August; a “mistake in judgement,” according to former Conservative Interim Leader Rona Ambrose; an “onerous and irritating” exercise, as Macleans dubbed it; or the “the most most expensive cabinet shuffle of all time,” as political strategist Zain Velji quipped on Twitter, referring to the fact that several prominent Liberal cabinet members lost their re-election bids.

Today, many Liberal supporters, are intoning the usual minority government mantra that “a win’s a win.” But the fact that the political landscape is so similar to the 2019 election outcome makes the whole process seem very much like an own goal against Team Trudeau.

It’s now evident that Liberal strategists clearly misread the mood of the country, which was decidedly against undergoing this vote while still in the midst of a pandemic, not to mention their own polls, which back in August suggested that there was a clear path to a majority.

In the end, while most Canadians appear willing to support Trudeau’s government on his response to the pandemic, they aren’t necessarily interested in signing the blank cheque he was hoping for.

The 2021 electoral map, a virtual mirror of 2019, shows a country once again divided — central Canada and the East support the Liberals, while the shutout in huge swaths of the West show that voters in that region remain stridently opposed to the Liberal vision.

Trudeau now returns to Ottawa to govern under the exact same conditions that were in place before he called the election. This means that to pass any legislation, he must count on the support of either the Bloc Québécois or the NDP. Will Bloc leader Yves-François Blanchet and Singh be as as eager to support Liberal policy as they were during the recent Parliament?

Even over the last few weeks, the pandemic has deepened the turmoil in almost every aspect of our lives and made the task of finding a solution that much more difficult.

The government’s massive spending to battle COVID-19 has created huge deficits: our health system is reeling under the pressure of multiple waves of the pandemic; the economy is faltering from job losses and business closures; and inflation is making it’s presence felt in the grocery aisles, retail stores and gas pumps across the country. Plus, the border to the U.S. is still closed and there’s huge pressure to address and resolve pressing environmental and Indigenous issues.

With those issues likely filling up most of the government’s agenda, there remain pressing seniors issues — like working with the provinces to fix a long-term care system that was overwhelmed during the pandemic, or preparing the country for the oncoming age wave by championing and funding a home care system that works for all Canadians.

“These seniors issues are highly complex and will take much time and planning to resolve,” notes David Cravit, C.A.R.P.’s chief membership officer. “Unfortunately, it’s unlikely that a minority government that is trying to stay in power will have the time or the appetite to tackle such complex issues.”

Cravit feels that the next Parliament will see the government “mouth pieties” about the state of long-term care and “sprinkle a few dollars around” to remedy the most pressing problems. But he’s not holding his breath that anything substantial on any of the seniors files will be accomplished.

However, some people, including Trudeau’s mother Margaret, don’t feel that the minority mandate is such a bad thing.

She was referring to the 1974 election when her husband won a minority and was forced to work with the NDP leader.

“[Pierre] said you could get things progressively done,” said Margaret, before adding, “You don’t want too much power to end up anywhere. It’s better to spread it out.”

Trudeau would be wise to listen to his mother’s consoling words. While his election gamble failed to produce the results he wanted, he can still successfully orchestrate Canada’s recovery by putting the Liberal agenda aside, working closely with the opposition parties and listening to Canadians.

Because that is the only “clear direction” that our new prime minister should be taking from last night’s results.