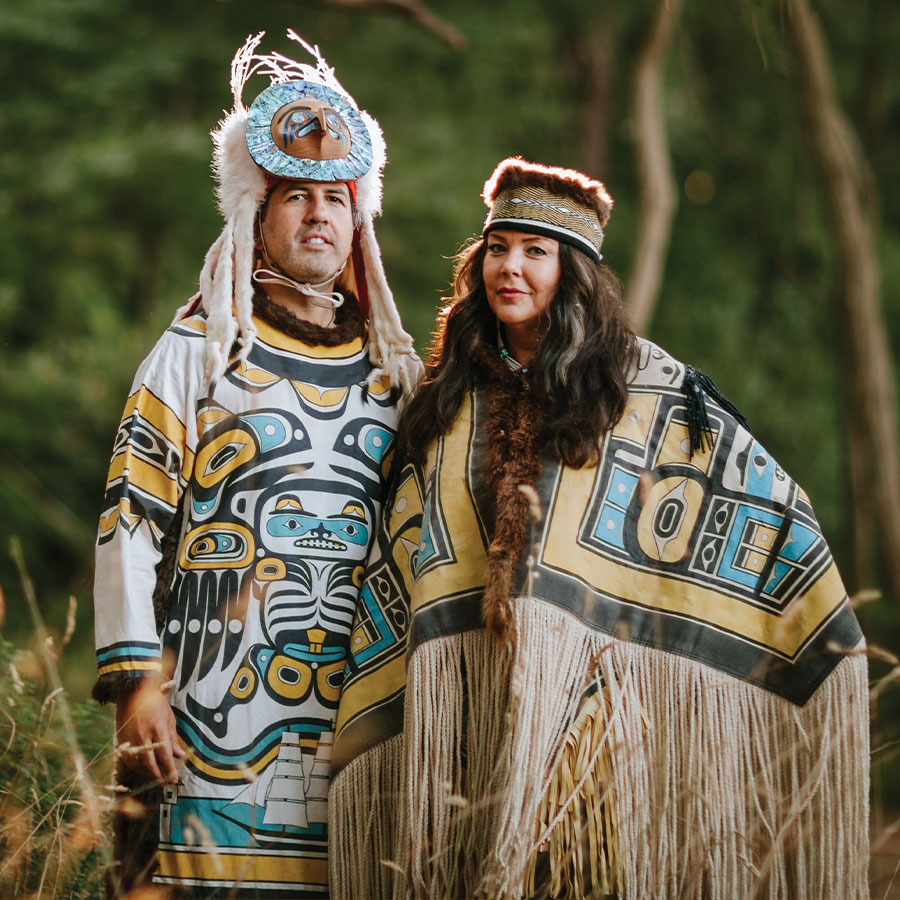 Andy Everson — pictured above with his partner, Erin Brillon, wearing the "Resistance" print he designed — recently honoured his grandparents by donating his iconic logo to the “Every Child Matters” campaign for residential school survivors. Photo: Kimberley Kufaas

Northwest Coast artist Andy Everson was given the traditional name of his grandfather, Nagedzi, a residential school survivor from K’ómoks First Nation who refused to allow his daughter to be taken by the Department of Indian Affairs representative.

“When my mom was ready to go to school, the Indian agent came up to my grandfather and said, ‘It’s time to take your daughter to residential school,’” says Everson, 49, who goes by his English name. “He told the Indian agent, ‘You’ll do it over my dead body.’”

She did not go, and although his grandfather died at 66 in 1972, his courage has had a profound impact.

“Growing up, we were able to enjoy childhood in a way that a lot of Indigenous people never got to do,” Everson says of family life at K’ómoks First Nation, located on the Comox Peninsula along the eastern shore of Vancouver Island.

His grandfather, Andy Frank, who grew up to become the Chief of K’ómoks First Nation, was sent to St. Michael’s Indian Residential School in Alert Bay, an island 200 km (125 miles) to the north.

“Like many people, he experienced abuse,” says Everson. “In particular, he was beaten when he would try to speak his [K’ómoks] language.”

In 2015, as the grassroots Orange Shirt Day was gaining traction as a national event, Everson created a circle of stylized hands to symbolize children being lifted up, and it has become one of the most iconic images of the movement. It was a spur-of-the-moment idea, much like his previous decisions to help protest oil pipelines and support the Idle No More movement.

“In both those cases, I was going to a protest, created the design literally just before, and then posted it online,” he says. “It was the same thing with Every Child Matters. I decided one morning to do up a design and put it online to show support, and it got shared a lot.”

Everson, who has prints in the collection of the National Gallery of Canada and has drawn international attention for his Star Wars-inspired Northwest Coast designs, did not trademark the logo. He wanted the focus to be the movement, not the artist.

He did grant the Orange Shirt and Indian Residential Schools Survivors societies permission to use it to raise funds, and was upset earlier this year to discover his design being used for profit on everything from T-shirts to key chains and face masks, with few sales, if any, being used to support the artists or the organizations.

Phyllis Jack Webstad co-founded the Orange Shirt Society in 2013, the year she started Orange Shirt Day in her hometown of Williams Lake, in B.C.’s Central Interior. The colour reminds her of the shirt she was wearing when, at six, she was taken to St. Joseph’s Mission Residential School a few kilometres away. A gift from her grandmother, the shirt and all her clothes were taken away the first day and never returned. Webstad wrote about her residential school experience in her 2018 children’s book, The Orange Shirt. Eight years after the first Orange Shirt Day on Sept. 30  — the time of year when Indigenous children were sent away to residential schools — it is now the National Day for Truth and Reconciliation, a federal statutory holiday.

Every year the non-profit Orange Shirt Society selects a new design by a First Nations artist for its “Every Child Matters” T-shirts for Orange Shirt Day, one of the major fundraising initiatives for the organization.

And every year, Webstad sees knock-offs sold online that use the Every Child Matters slogan and the artists’ designs. “They’re stealing,” she says, but because most items are made in Asia, there is little they can do about it other than educating consumers.

“I have decided to trust humanity to know who the proper sellers are and who are the ones out for profit,” says Webstad, who adds that the society has applied for a Canadian trademark on the slogan to try to protect its intellectual property. “I just have to rely on people to know the difference.”

Everson says it’s not enough just to wear an orange shirt. “If you can direct your money in buying that orange shirt toward a society that’s doing important work in our communities, that speaks louder than just wearing a shirt.” Everson asks anyone who uses his design to credit him and make a donation to an Indigenous non-profit; and if they sell anything with the design on it, he wants all profits to be donated.

It’s a practice in place at Totem Design House, owned by Everson’s life partner, Erin Brillon, who is one of the lead artists at the Indigenous-owned gallery and décor outlet in Courtenay, B.C., where a portion of revenues goes to the Copper Legacy Indigenous Empowerment Society.

“The capitalist kind of mentality is to raise yourself up and push
others down in some ways,” Everson says. “We feel that the more we can uplift one another, we all benefit from that.”

Everson’s mother lost her “Indian” status when she married a white man, and his family was not able to live in the reserve community until the law was changed in 1985. He still spent a great deal of time with his grandmother, U’magalis Margaret Frank, wife of Nagedzi, learning about the traditions and culture of his K’ómoks and Kwakwa’ka’wakw ancestors.

“She was born in the late 1800s and experienced profound cultural change. She grew up in a community that still had traditional Big Houses,” he explains. “She actually lived across the field from us, and I’d go spend time with her almost every single day. It’s not something that all teenagers do, spend time with their grandparents, but for me it was really important.”

He took up traditional dancing, which is when he discovered his artistic talent while decorating dance regalia. He still dances with the Le-La-La Dancers, the Gwa’wina Dancers and the K’umugwe Dancers, which he started with his family.

After earning a master’s degree in anthropology at the University of British Columbia, Everson started a consulting company, but he eventually realized he was making more money from his art.

“I knew something had to give, so I might as well just do the thing that I enjoyed the most,” he says. “And doing artwork is less about work and more about being able to create.”

His grandmother died, just shy of 100 years old, in 1997, the same year Everson launched his art career. In 1999, he released a limited edition serigraph entitled U’magalis. In his description, he calls her the “single biggest influence on my life,” and the person who taught him about love, respect and honesty.

A version this article appeared in the Oct/Nov 2021 issue with the headline “Philanthropy by Design,” p. 74.