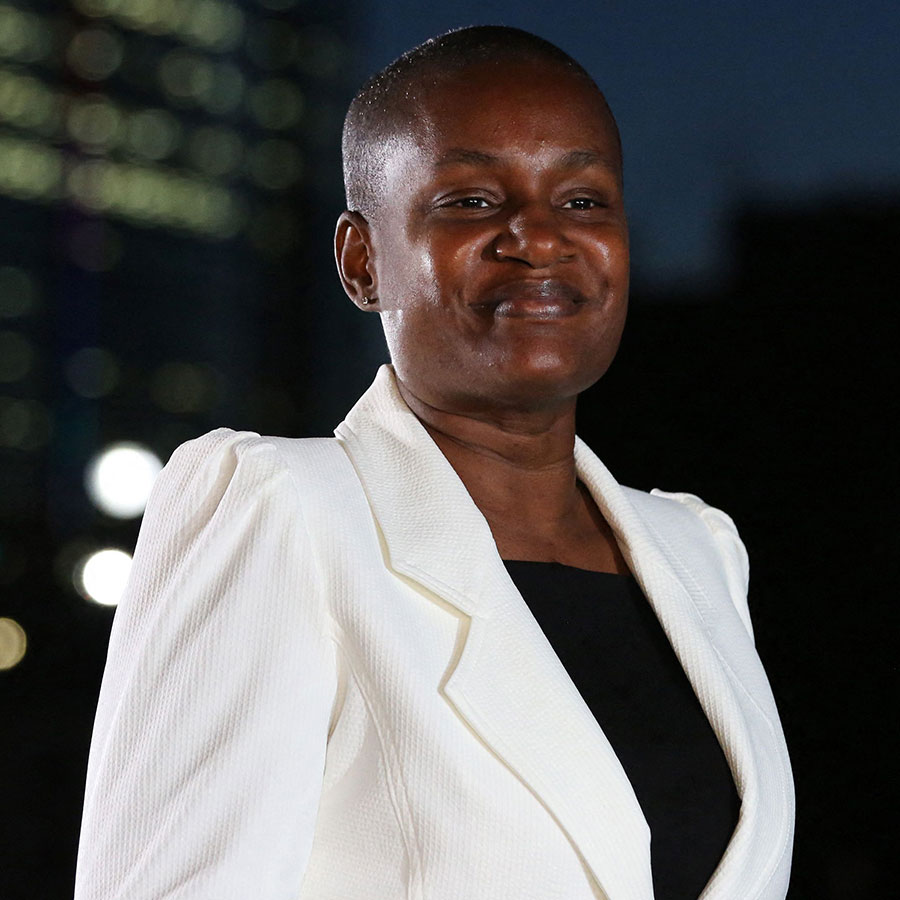 Annamie Paul speaks to the media as she arrives to attend the English language debate at the Canadian Museum of History in Gatineau, Quebec, on Sept. 9, 2021. Photo: Dave Chan / AFP / GettyImages

When Annamie Paul, the first Black Jewish woman to lead a Canadian federal political party, announced publicly following the 2021 federal election that she was resigning as leader of the Green Party, the National Post ran an article suggesting that anti-Semitism was to blame for the treatment the 48-year-old received.

“Instead of championing a Jewish woman of colour who came into the party with distinction and charisma, the party relentlessly pursued her for her nuanced approach to the Middle East conflict,” wrote the authors, referring to infighting that resulted in Fredericton MP Jenica Atwin crossing the floor to join the Liberal party.

While Paul had pinpointed racism and sexism as battles she was fighting within the party, she ultimately didn’t quit because of her religion, race or gender. Rather, she was pushed out because of who she refused to become — a clone of Elizabeth May, the former leader of the federal Green Party.

No Support From May

May, 67, mostly kept silent throughout Paul’s tenure. But in the weeks since Paul’s resignation, she penned an op-ed for the Toronto Star where she essentially blamed Paul — not the Green Party — for its issues.

“Her leadership style clashed with party culture almost from the beginning,” May wrote, adding that she tried to mentor Paul but, for some reason, it just did not work.

Paul said during her resignation that, “When I was elected and put in this role, I was breaking a glass ceiling. What I didn’t realize at the time is that I was breaking a glass ceiling that was going to fall on my head and leave a lot of shards of glass that I was going to have to crawl over.” Instead of empathizing with her, May went on CTV’s Question Period and criticized Paul yet again for leadership she does not agree with.

It’s important to note that in 2018, May was accused by former staff of bullying and creating a toxic work environment. She was cleared of any wrongdoing following an investigation but, given her experiences dealing with accusations, one must wonder why May has chosen to publicly repudiate Paul instead of offering support.

One explanation behind Paul’s treatment is a concept known as performative allyship, which includes a lack of diverse leadership or supports despite public statements to the contrary. “Performative allies share their knowledge about inequity with others, but don’t use their privilege and resources to make real change,” explains Xochitl Ledesma, director of leading for equity and inclusion at Catalyst, a global non-profit that helps build workplaces that work for women.

Many political leaders excel at performative allyship. They use hashtags on their social media or attend public ceremonies but their actions in direct aid of Black, Indigenous, and religious minorities is often lacking. This fake allyship also belies any understanding about intersectionality, a term coined by Kimberlé Crenshaw to explain intersectional approaches that take into account multiple identities so as to fully grasp how structures of power create overlapping and interdependent systems of discrimination.

The Glass Ceiling Was Already Low

Importantly, Paul was only the third woman to lead a federal political party. In addition to May, Kim Campbell was the first woman to break the glass ceiling in Canadian politics when on June 25, 1993 she became the first, and still only, woman prime minister at the age of 46.

While her stint as prime minister was short, in her concession speech Campbell remained highly optimistic and the Conservative Party remained committed to her despite leading them to the worst electoral defeat in Canadian history.

Everyone is entitled to their opinions about Paul’s inability to win her riding of Toronto-Centre. But her stint as Green Party leader has made it clear that our political system is not yet capable of accommodating differences — of opinion, leadership style, race and religion.

Paul may be the first Black Jewish woman to resign as leader of a federal political party, but the elitist culture in Canadian politics pushed her out, along with others such as former Nunavut New Democrat Mumilaaq Qaqqaq and former Liberal Celina Caesar-Chavannes.

Unless there is a culture change, we are not likely to see another Annamie Paul appear on the federal political scene. And if that happens, we all lose.

Cheryl Thompson is an assistant professor in Creative Industries at The Creative School.