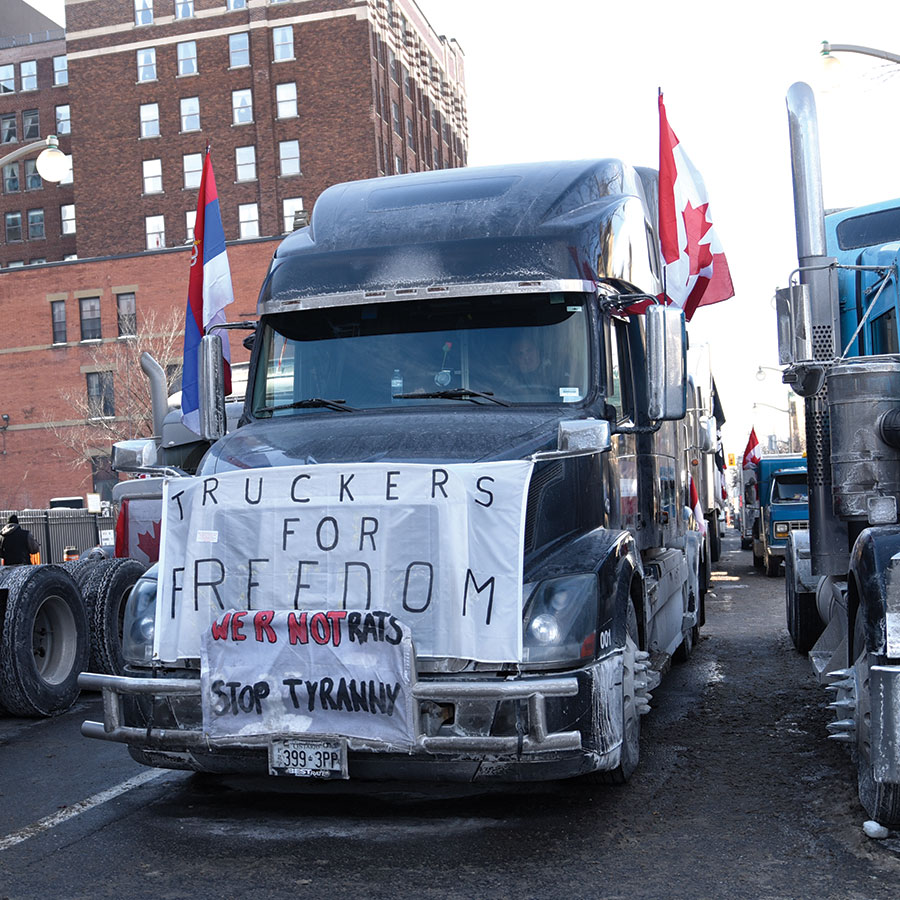 Trucks lined up with banners and signs next to the Parliament building during the 4th Day of Trucker's protest against the mandatory vaccine policy imposed on the Canadian truckers returning from USA to avoid a two week quarantine at Parliament Hill in Ottawa-Canada Photo: Arindam Shivaani/NurPhoto/Getty Images

The protest of commercial truckers swarming Canada’s capital in Ottawa shows how an issue can quickly be hijacked by extremist groups spouting themes of racism, hatred and violence.

The unwritten playbook of successful public protest is to instil widespread awareness through news and social media coverage about a simple and clear issue that poses a direct and immediate threat to people.

The issue must have an obvious solution to a glaring unfairness that those in power refuse to acknowledge.

This is standard across the vast literature on social movement action. For example, psychologist Bert Klanderman’s The Social Psychology of Protest pointed out that in framing an issue to protest, anger is the emotion “expressed by people who hold external agents responsible for an unwanted situation.”

The shorthand to igniting a protest is: fear to anger to leadership to action. In other words, a fearful person often becomes an angry person demanding quick action that is provided through exploitative leadership.

There’s no doubt many of the protesting truckers are fearful on many levels. In interviews, they cite fear of losing their livelihoods and having their civil liberties quashed by COVID-19 mandates.

This fear has been easily transferred to anger at governments and health agencies. Their solution? End COVID-19 restrictions, not just for truckers, but for all Canadians.

The fear and anger made a powerful, volatile brew seeking leadership and visible action — hence the so-called “freedom convoy.”

And that’s when it all went wrong.

An Amalgam of Many Forces

Within hours of truckers jamming the streets of Canada’s capital, what rose quickly to the surface like a toxic buoy were images and news stories of protesters waving swastikas, urinating on the Tomb of the Unknown Soldier, demanding free food from homeless shelters and raising the wrath of Prime Minister Justin Trudeau, who said:

“I want to be very clear; we are not intimidated by those who hurl insults and abuse at small business workers and steal food from the homeless. We won’t give in to those who fly racist flags. We won’t cave to those who engage in vandalism or dishonour the memory of our veterans. There is no place in our country for threats, violence, or hatred … it needs to stop”

A large protest can often be an amalgam of many forces with many purposes and agendas. This ecosystem of demands, rage and energy can easily serve as the host to smaller yet powerful groups who – with feverish commitment, organizational skills, resources and experience – hijack the agenda.

These groups are not playing to the general public but to their own narrow audience of supporters, using provocative and sensational actions to gain news and social media coverage and hopefully a few more adherents. They are, upon examination, a grab bag of far-right extremists, anarchists and Donald Trump acolytes.

My research and others over the decades on what level of public protest is acceptable to most of us has continually yielded the same result. We accept peaceful protests as an inherent right within democracies. But we also want protests to be orderly, generally not disruptive to our everyday lives, short-lived and non-violent.

For example, the World Values Survey shows that between 2017 and 2020, 29 per cent of Canadians would never attend a “lawful, peaceful protest” but 48 per cent might, depending on the issue. The operative words are peaceful and lawful.

Researchers generally agree that violent events that evoke fear and other strong emotional responses are ingrained and remembered far more by the human brain than more benign, non-violent events. This phenomenon is especially true of public protest actions where the tone of a protest (violent versus non-violent) can quickly sway public opinion from supportive to opposition.

What the “freedom convoy” has succeeded in doing is tear off the protective tissue on “being a Canadian” to expose an ugly truth — that perhaps racism, violent radicalization and disrespect simmers within much of the Canadian psyche, more than we were willing to admit.