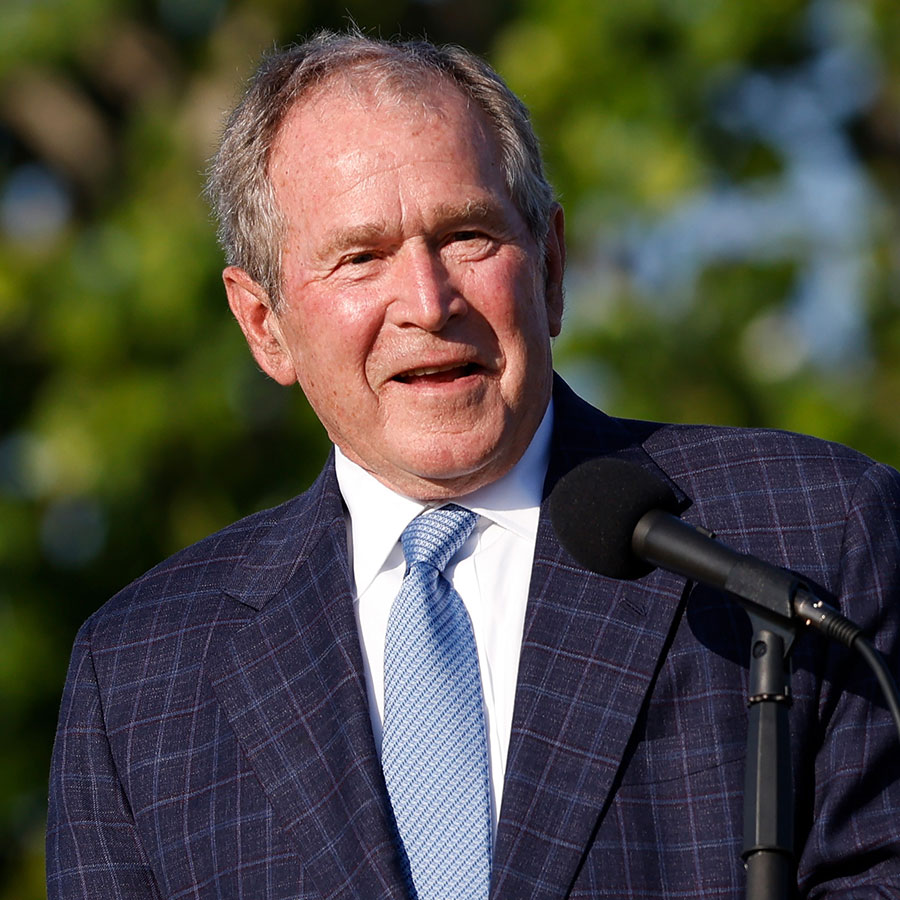 Former U.S. President George W. Bush speaks during the flag raising ceremony prior to The Walker Cup at Seminole Golf Club on May 07, 2021 in Juno Beach, Florida. The 75-year-old blamed a recent gaffe during a speech on his age, though some aren't buying it. Photo: Cliff Hawkins/Getty Images

Bush made the mistake while speaking to reporters about the Russian invasion of Ukraine during an event at the George W. Bush Presidential Center at Southern Methodist University.

“The result is an absence of checks and balances in Russia, and the decision of one man to launch a wholly unjustified and brutal invasion of Iraq,” Bush said. Realizing his blunder, he corrected himself, saying, “I mean, of Ukraine.” After which he muttered, “Iraq, too.”

When Bush recovered from the awkward moment, he blamed the gaffe on his age: “Seventy-five,” he said.

While the crowd broke out in laughter, the irony of the statement was not lost on mainstream and social media. Many were quick to suggest that maybe this faux pas was actually a Freudian slip, and that Bush was finally admitting that his 2003 invasion of Iraq was indeed “unjustified.”

Thousands of Americans died in the unpopular war the Bush administration justified based on U.S. intelligence documents. The documents in the dossier claimed that Iraqi leader Saddam Hussein was developing weapons of mass destruction.

At the time, there was a fierce debate over the veracity of these claims. After Iraq was defeated, and inspectors failed to turn up any evidence of a stockpile of weapons, many concluded that the evidence had been trumped up by the Bush administration to justify the invasion.

Meanwhile, there seems to be something about the mention of Putin that prompts gaffes from U.S. statesmen. Bush’s is curiously similar to the one President Joe Biden, 79, made at his State of the Union address in March. “Putin may surround Kyiv with tanks, but he will never win the hearts and mind of the Iranian people.”

Here are just some of social media’s reaction to Bush’s gaffe.