Ontario Election: As Doug Ford Wins Second Term as Premier, Will He Keep His Promises to Seniors? 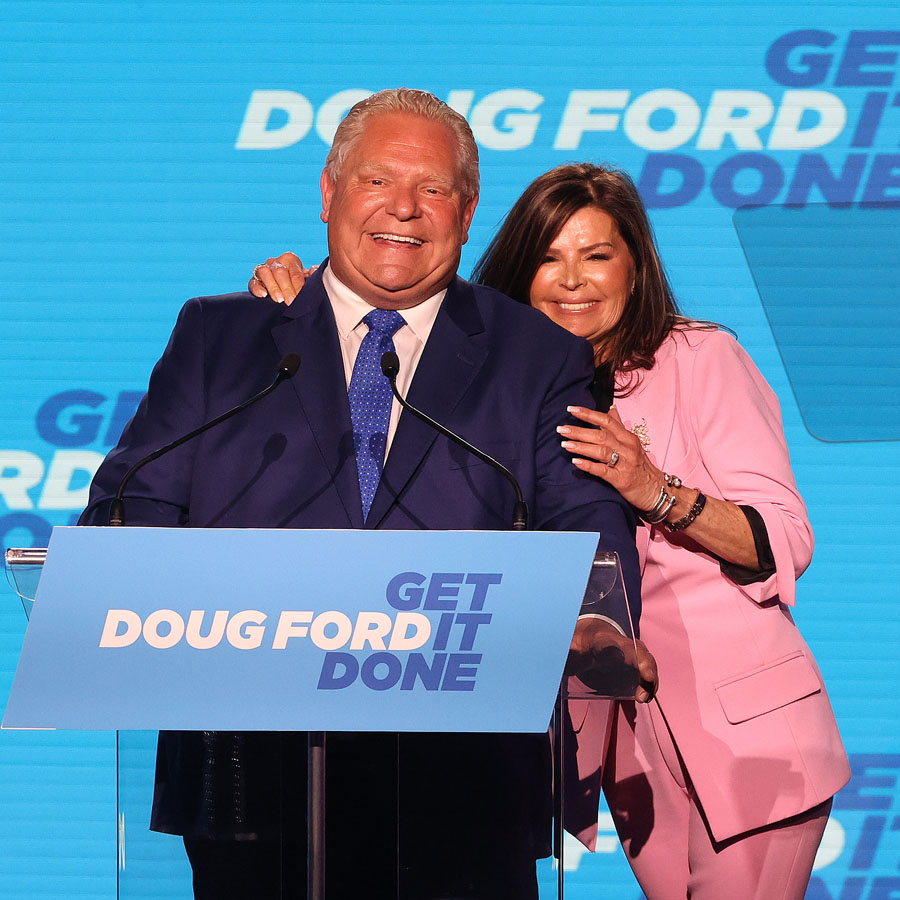 Doug Ford and his wife Karla during his victory speech at his campaign headquarters in Toronto after winning his second term as Premier of Ontario on June 2, 2022. Many are now expecting Ford to live up to his promises regarding help for the province's seniors. Photo: Steve Russell/Toronto Star via Getty Images

Doug Ford, the newly re-elected Premier of Ontario, ran his campaign under the slogan “Let’s Get It Done” and the 57-year-old Progressive Conservative Party leader did just that last night, sweeping back to power with a massive landslide victory.

“This is my proudest achievement as a leader of this party, building a new coalition, expanding our base, creating a more inclusive party where everyone matters, because never in our lifetime has it been more important for a party to represent all of Ontario,” he said in his victory speech from his home base in Etobicoke.

Under Ford, the PCs captured 40 per cent of the popular vote, good for 83 seats. The NDP under Andrea Horwath finished a distant second with 31 seats and the Liberals under Steven Del Duca were a distant third, mustering only eight seats. Both leaders resigned after their dismal showings.

Leading up to the election, many voters had expressed unhappiness with the way Ford’s government let the health care and long-term care systems become overwhelmed during the pandemic and didn’t trust his ability to fix it.

However, at a time when his gas and food prices are making life unaffordable for many, voters said they trusted Ford’s ability to steer the province through the resulting economic instability. In the end, this might have been the difference, voters didn’t feel confident that the unproven Del Duca or perennial backmarker Horwath had the right team to handle economic headwinds that many are predicting.

As the PCs get set for another four years at Queen’s Park, Bill VanGorder, chief policy officer at CARP (an affiliate of ZoomerMedia), says that he will be watching that the government delivers on these election promises to seniors, which focus on boosting home care and revamping long-term care — both of which comprised part of the group’s election priority list for seniors, known as The CARP 5.

“Once the election is over, our job begins,” says VanGorder. “We’re not going to let Premier Ford and his new government relax for one second.”

He says that many CARP members have become disillusioned with the electoral process that sees parties make senior-friendly promises during the campaign, but fail to deliver on them when they assume power.

He says he’ll be monitoring the government to see that they turn their promises, especially on reshaping long-term care into action. “We’ll be watching. We’ll be measuring results.”

No Place to Grow Old: How Long-Term Care Ignored the Lessons From the First Wave of COVID-19