Emergencies Act Inquiry: How to Balance Protest Rights With the Rule of Law? 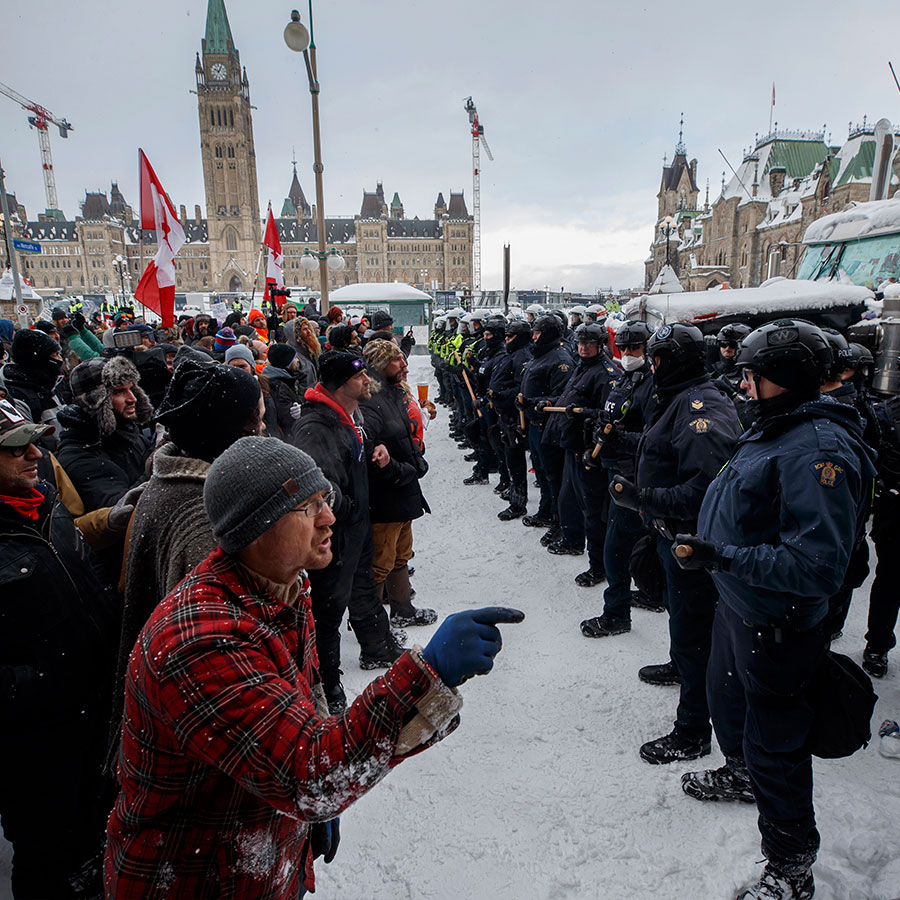 Police move in to clear downtown Ottawa near Parliament Hill of protesters after weeks of demonstrations during the federal government's unprecedented use of the Emergencies Act on Feb. 19, 2022. Photo: Cole Burston/The Canadian Press

A question operating in the background of the ongoing Emergencies Act inquiry is one of the most difficult for liberal democratic societies to resolve.

How long should society be expected to tolerate the disruption caused by a protest action — in this case the so-called Freedom Convoy’s occupation of Ottawa in February 2022 — before it’s permissible to intervene within the rule of law?

The relationship between protest and the rule of law is complex. While both play essential roles in the successful functioning of liberal democracies, those roles are distinct and often at loggerheads.

At the most basic level, the rule of law is meant to provide citizens with a stable social and political environment in which to carry out their lives. It ensures no one — individuals or governments — may exercise authority over anyone else at their whim.

Since only the law dictates the rules citizens live by, and because any changes to the law must be made according to processes that pass through the required democratic channels, each citizen can be assured that, at least in a political sense, they will be treated equally to all others.

Protest is related to this. Although in principle the rule of law aims to establish political equality among citizens, in practice it can be used as a powerful tool to entrench inequality and oppression.

Protest is a way to keep these potential abuses of the rule of law in check. Through protest, citizens have a way to challenge the law from the outside, ensuring their political interests aren’t swallowed up by the majority. For this reason, protest is entrenched as a constitutionally protected right.

It’s easy to see how these two planks of liberal democracy come into conflict.

By ensuring that all members of society organize their lives according to the same set of rules, the rule of law introduces a level of stability into the political environment that stands to benefit everyone.

Yet when these benefits are perceived by some to have been distributed unequally or unfairly, disrupting the stability of the political environment becomes the most natural — and often the most effective — way to exercise the right to challenge perceived injustices.

What Pillar of Democracy Wins Out?

The question is how should a liberal democracy navigate its way out of this dilemma? Typically, it involves endorsing one of its planks over the other.

Those in favour of the rule of law assert that protest actions should be tolerated up to the point determined by the law, but not a step further. In this view, protest is reduced to a mechanism by which aggrieved groups may communicate a message to the general public with the sole aim of impacting democratic processes that happen later on — for example, a federal election.

Anything beyond this would constitute an undemocratic attempt at a power grab.

As French statesman Maximilien Robespierre put it in the aftermath of the French Revolution:

“Regulating the legal forms of resistance to oppression is the last refinement of tyranny.”

In other words, because the law tends to reflect the biases that exist in the broader community, faith that the law will act as its own corrective is often misplaced.

What Protests are Worthy?

It should come as no surprise that people will choose which position to defend based on their own perceptions of the worthiness of the protest in question.

If you agree with the message of the protest, you will tend to emphasize the democratic right of citizens to stand up for what they truly believe in. If, on the other hand, you dismiss the protest’s message as either trivial or misguided, you’ll emphasize the priority of the rule of law and call on it to restore order.

The problem, of course, is that in a democracy, the question of “worthy protest” is itself open to debate. And this extends to more nuanced questions, such as: “Do protests have a shelf life?” This question seemed especially germane during the Ottawa protest since it went on for weeks and disrupted the lives and livelihoods of fellow citizens.

So we are left in a bind. Protest and the rule of law both serve essential roles in the successful functioning of liberal democratic societies, but the manner in which they perform those roles is often at odds.

In this respect, there is no general solution for how a society can overcome this tension — it’s a feature of liberal democracies themselves.

But there are better and worse environments for how the tension can be managed. As a rule, societies that exhibit high levels of trust among citizens tend to perform better at balancing protest rights and the rule of law than those that exhibit low levels of trust.

What the Ottawa protest has taught us is that somewhere along the way Canadians have fostered an especially hostile environment for working out the conflicts that exist between the right to protest and the rule of law. It’s an environment that’s currently characterized by extreme polarization and an almost pathological disrespect for those on the opposing side.

Unless and until we re-establish some faith in our institutions and in one another, the clashes we witnessed earlier this year are sure to be repeated many times over.