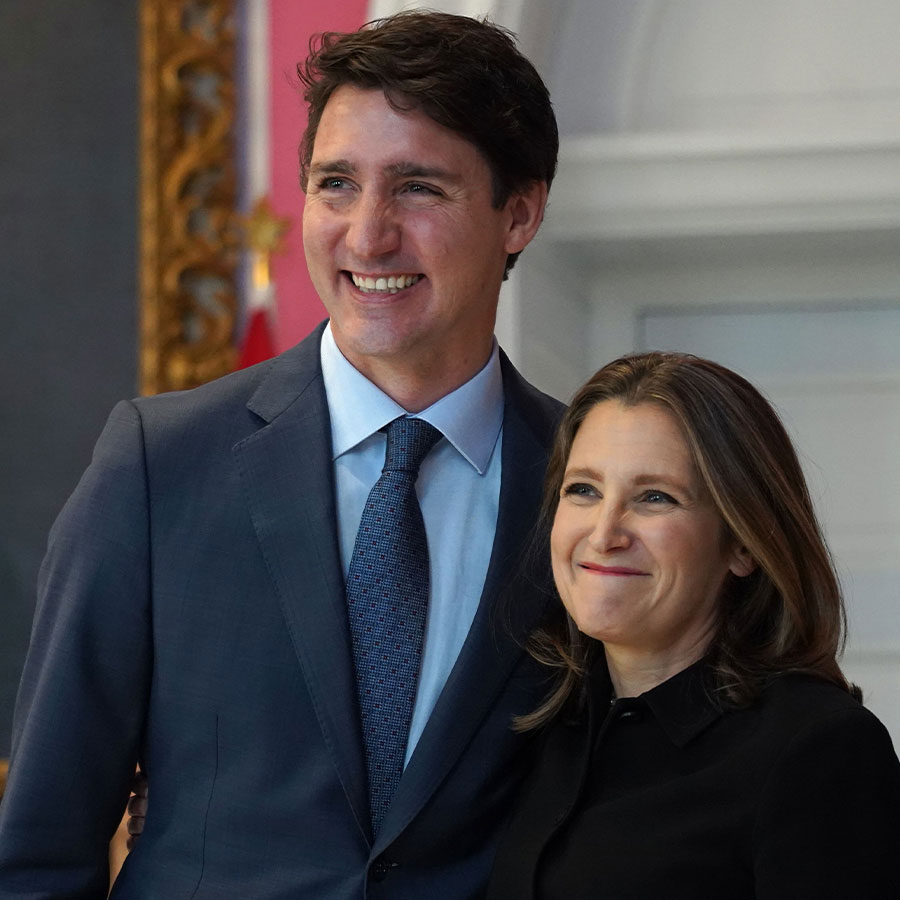 Canadian Prime Minister Justin Trudeau poses with Chrystia Freeland after she was sworn-in as Deputy Prime Minister and Minister of Intergovernmental Affairs during a ceremony at Rideau Hall on November 20, 2019 in Ottawa, Canada. Photo: CHRIS WATTIE / Contributor / GettyImages

Prime Minister Justin Trudeau said on Tuesday he will swear in his new cabinet next month, with Chrystia Freeland returning as his finance minister and deputy, after his Liberals were re-elected for the third time.

Trudeau, speaking with reporters in Ottawa at his first full news conference since the Sept. 20 election, also said lawmakers would be back in parliament this fall – without giving a date – and that putting previously announced vaccine mandates in place would be a priority.

“I have asked Chrystia Freeland to continue serving as deputy prime minister and our minister of finance, and she has accepted,” he said.

“We will be swearing in cabinet in the month of October and we will be bringing back the House of Commons before the end of fall,” he added.

Trudeau‘s Liberals were returned to power in a closely contested election, but fell short of winning a majority. That means they will continue to need the support of at least one opposition party to pass legislation.

Despite that challenge, Trudeau said he hoped his new government would last the full four years, and that he was ready to work in partnership with other parties on the major issues.

One of the first will be a promise the Liberals made to require vaccination for federal workers and for most domestic air and train travelers. Canada continues to battle a Delta-driven fourth wave of coronavirus infections.

“Immediately we will deal with the mandate for federal employees who will have to get vaccinated, and there will be announcements about that in the coming days,” Trudeau said, without saying whether workers who refuse will be fired.

While Trudeau did not a give a date for swearing in his new cabinet, he said there would be gender parity. Three of his female cabinet ministers lost their seats in the election and one did not run.

“I will be seeking, as I always do, to ensure that there is a proper regional distribution, that there is a range of skills and diversity around the table,” Trudeau said.

The only certain return to the cabinet at this point is Freeland, Trudeau‘s deputy and closest minister, seen by many as his mostly likely successor. Canada’s first female finance minister, Freeland, 53, is an advocate for women’s employment and childcare.

The Liberals won 159 seats in the election, short of the 170 needed for a majority but two more than in 2019, though one lawmakers elected as a Liberal will sit as an independent.

The Conservatives took 119 seats and the New Democrats have 25, while the Quebec-focused Bloc Quebecois have 33. One recount has been requested so far.