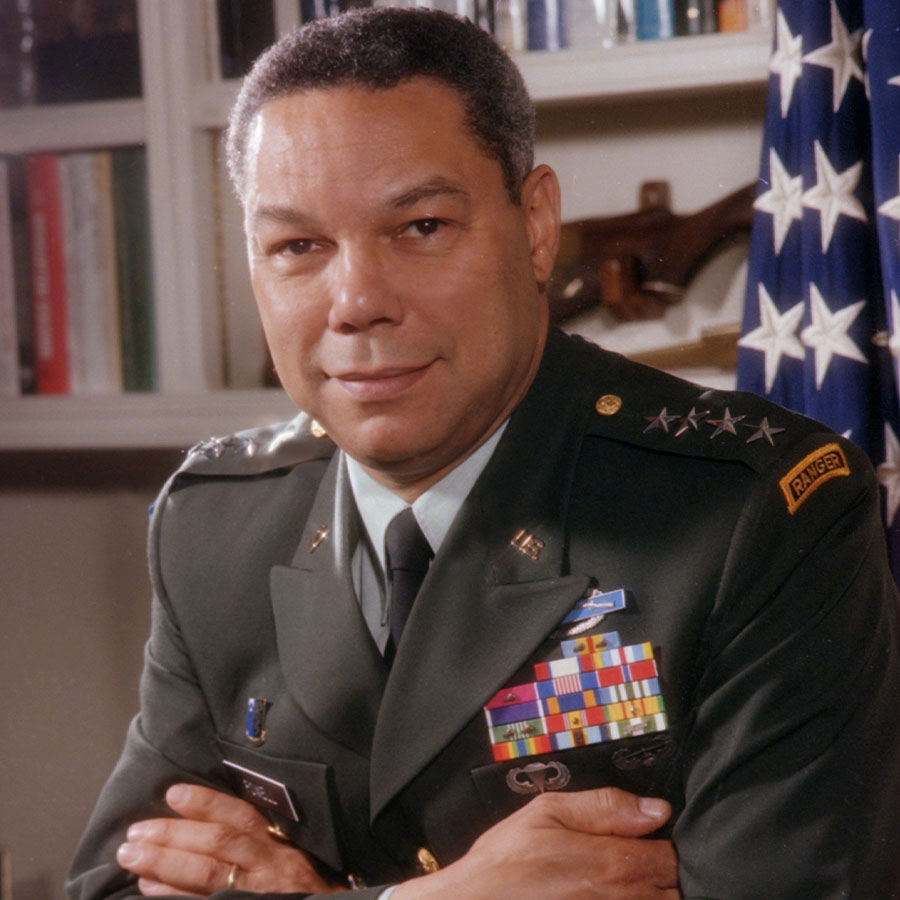 Colin Powell, the first Black U.S. secretary of state and top military officer, died on Monday at age of 84 of COVID-related complications. He had been fully vaccinated from the virus, but was also battling multiple myeloma cancer. Photo: Bachrach / Getty Images

Colin Powell, the son of Jamaican immigrants who rose to become the first Black U.S. secretary of state and top military officer, but whose reputation was tainted in 2003 when he touted spurious intelligence to the United Nations to make the case for war with Iraq despite deep misgivings, died on Monday at the age of 84.

Despite being fully vaccinated against COVID-19, his family said, he died due to complications from the disease (he had also been battling multiple myeloma cancer, which can compromise the body’s immune system and ability to fight off infection).

Powell was one of America’s foremost Black figures for decades. He was named to senior posts by three Republican presidents and reached the top of the U.S. military as it was regaining its vigour after the trauma of the Vietnam War.

Powell, who was wounded in Vietnam, served as U.S. national security adviser under President Ronald Reagan from 1987 to 1989. As a four-star Army general, he was chairman of the military’s Joint Chiefs of Staff under President George H.W. Bush during the 1991 Gulf War, in which U.S.-led forces expelled Iraqi troops from neighbouring Kuwait.

Powell, a moderate Republican and a pragmatist, considered a bid to become the first Black president in 1996 but his wife Alma’s worries about his safety helped him decide otherwise. In 2008, he broke with his party to endorse Democrat Barack Obama, who became the first Black person elected to the White House.

Powell will forever be associated with his controversial presentation on Feb. 5, 2003, to the U.N. Security Council, making President George W. Bush’s case that Iraqi President Saddam Hussein constituted an imminent danger to the world because of its stockpiles of chemical and biological weapons.

He admitted later that the presentation was rife with inaccuracies and twisted intelligence provided by others in the Bush administration and represented “a blot” that will “always be a part of my record.”

Bush had picked Powell, the top U.S. military officer during his father’s presidency, as secretary of state in 2001.

Powell endured four stormy years as the top U.S. diplomat, often outmaneuvered by Vice President Dick Cheney — with whom he had served closely under the first President Bush — and Defense Secretary Donald Rumsfeld.

With U.S. troops already fighting a war in Afghanistan launched after Afghan-based al Qaeda leaders plotted the Sept. 11, 2001, attacks on the United States, hawks within the Bush administration began to advocate war with Iraq.

Powell argued within the administration to let diplomacy run its course on Iraq. He held grave reservations about a war, as well as the veracity of intelligence about Iraqi weapons, and the Pentagon’s insistence on a relatively small invasion force.

Powell privately warned Bush about the monumental difficulties of invading and occupying Iraq, invoking the so-called Pottery Barn rule: “You break it, you own it.”

Nevertheless, Powell — the most respected member of the Bush cabinet globally — agreed to publicly sell the case for war in order to gather international support.

In the Security Council chamber, he displayed photographs and diagrams purporting to detail Iraqi weapons of mass destruction, as well as translations from U.S. intelligence intercepts.

At one point, Powell brandished a small vial containing a teaspoon of simulated anthrax, warning that Iraq had not accounted for “tens upon tens upon tens of thousands of teaspoons” of the deadly pathogen.

The invasion came six weeks later but no such weapons were found, undermining American credibility for years. U.S. forces fought in Iraq from 2003 to 2011, with nearly 4,500 American troops killed and 32,000 wounded.

Powell told the author of a 2006 book that he spent five days ahead of the U.N. presentation “trimming the garbage” that Cheney’s staff had provided as evidence of Saddam’s weapons programs and alleged links to al Qaeda.

“There were some people in the intelligence community who knew at that time that some of these sources were not good, and shouldn’t be relied upon, and they didn’t speak up. That devastated me,” Powell told interviewer Barbara Walters in 2005.

At the time, Powell remained the loyal soldier — a reluctant warrior who did not threaten to quit in protest or voice his concerns to the world.

“Well, loyalty is a trait that I value, and yes, I am loyal,” Powell said in the 2005 interview. “And there are some who say, ‘Well, you shouldn’t have supported it, you should have resigned.’ But I’m glad that Saddam Hussein is gone.”

Powell announced his resignation in “mutual agreement” with Bush after the president’s November 2004 re-election. Bush called Powell “one of the great public servants of our time.”

One of his chief military accomplishments was his development of the “Powell Doctrine” on the use of U.S. force, which arose out of the ambiguous objectives and erratic troop build-up of the Vietnam War era.

The doctrine states: war should be a last resort; force, when used, should be overwhelming; there must be strong public support for it and a clear exit strategy.

Powell was born in New York City on April 5, 1937, and raised in the South Bronx neighbourhood, the son of a shipping clerk and a seamstress from Jamaica who arrived in America in 1920 aboard a “banana boat” — a United Fruit Company steamer.

Powell‘s own ticket to success was the military’s Reserve Officer Training Corps (ROTC), a program for university students that engaged his energies when he was, by his own admission, an otherwise uninspired student at the City College of New York.

He was commissioned a U.S. Army second lieutenant in 1958.

He served 35 years in the Army, including two combat tours in Vietnam and postings in West Germany and South Korea. In Vietnam, he was wounded by a “Punji stick” booby trap near Vietnam’s border with Laos and injured in a helicopter crash.

He earned a White House fellowship while in the Army during Richard Nixon’s presidency and won the respect of officials who later would serve in senior posts under Reagan. He served as chairman of the Joint Chiefs of Staff from 1989 to 1993.

Powell became a celebrity during the 1991 Gulf War with crisp televised briefings, at one point saying of Iraq’s army: “First we’re going to cut it off, then we’re going to kill it.”

As the top U.S. military officer, he opposed allowing gays to serve openly in the military, but reversed his view in 2010 after Obama became the first president to endorse gay marriage.

After deciding not to run for president in 1996, Powell gave a speech at that year’s Republican convention endorsing Bob Dole against Democrat Bill Clinton, who was president during Powell‘s final months as chairman of the Joint Chiefs of Staff.

There were scattered boos from conservative delegates in San Diego when Powell said he supported abortion rights and affirmative action to help minorities.

Powell, who became increasingly isolated in his party amid its shift to the right, said he remained a Republican despite endorsing Obama in 2008 and 2012.

Powell married his wife Alma in 1962. They had three children, including Michael Powell, who served as U.S. Federal Communications Commission chairman under George W. Bush.

— Will Dunham and Arshad Mohammed; Writing by Will Dunham; Editing by Alex Richardson

Remembrances Pour In for Colin Powell

U.S. “Puts Politics Aside” to Honour George H.W. Bush’s Life of Service, and Mulroney Eulogizes his Partner in Geo-Politics