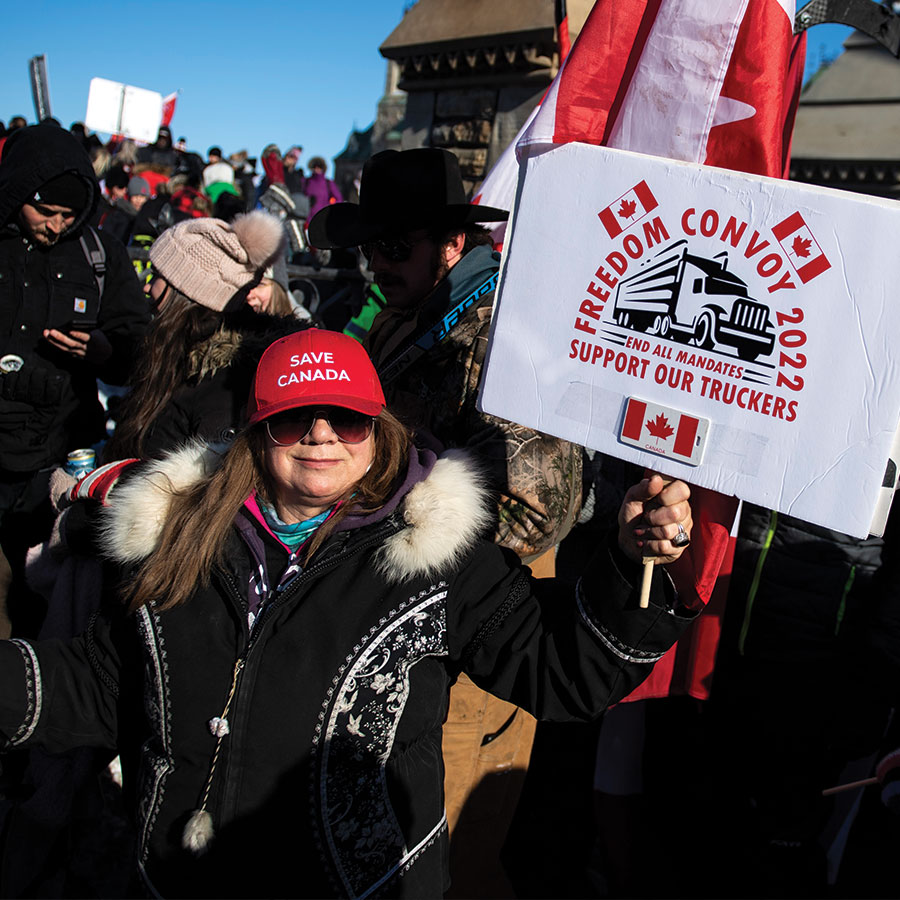 A person holds a sign for the "Freedom Convoy," a cross-country convoy protesting a federal vaccine mandate for truckers, as people rally against COVID-19 restrictions on Parliament Hill in Ottawa, on Saturday. Photo: Justin Tang/The Canadian Press

The Canadian truckers’ “freedom convoy” to Ottawa has the markings of another protest at a nation’s capital.

On Jan. 6, 2021, people from across the United States staged a protest in Washington, D.C., that quickly turned into a violent siege of the Capitol building. They were angry over what they falsely viewed as an election “stolen” from outgoing president Donald Trump.

Some even flew the Confederate flag and the swastika, symbols of hate and white supremacy that were also seen at the U.S. raid of the Capitol. Journalists were shoved, spit on and accosted along the convoy’s path.

The Canadian protesters seem to have emulated some of the behaviour of their U.S. counterparts, desecrating public monuments and bullying homeless shelters into feeding them. The Rideau shopping centre was forced to close due to protesters refusing to wear face masks.

Trump has nothing directly to do with Canadian truck drivers and their supporters who oppose government vaccine mandates. However his angry rhetoric of being victimized by an untrustworthy elite is similar to the sentiments fuelling the grievances of Canada’s protesters.

Trump even endorsed the convoy participants as “doing more to defend American freedom than our own leaders.”

Canadian leaders, on the other hand, took diametrically different positions as the convoy made its weeklong journey from British Columbia to Ottawa.

Prime Minister Justin Trudeau labelled the convoy a “small fringe minority of people … holding unacceptable views [that] do not represent the views of Canadians.” For the most part, he remained quiet as the convoy travelled across the country, and was moved to a safe, undisclosed location as the protesters arrived in Ottawa.

Erin O’Toole, leader of the Conservative Party, saw the convoy as an opportunity to burnish his credentials as a leader who listens and cares. He apparently wants to tap into the anger that the protesters have over vaccine mandates.

Tapping into a sentiment that extends beyond the few thousand protesters, or even beyond the unvaccinated, allows him to differentiate himself from the Liberals. Tellingly, he referred to truckers as “our neighbours, our family, and most importantly, they are our fellow Canadians.”O’Toole seemingly believes that resentment over pandemic lockdown measures — most of them implemented at the provincial level and now in place for almost two years — is wider and deeper than generally realized.

By meeting with some of the truckers, O’Toole is now associated with the convoy and its messages. Given the fact that the vast majority of Canadians are vaccinated and are largely in favour of vaccine mandates, this is a gamble for a politician seeking to become the next prime minister.

There will undoubtedly be attack ads from opposition parties in the next election — assuming O’Toole remains leader of the Conservatives — that feature footage of him defending and supporting the convoy protesters spliced with images of the defaced Terry Fox statue, the War Memorial and the Tomb of the Unknown Soldier.

Provincial premiers of all stripes, in the meantime, have been silent throughout the convoy, happy to leave the spotlight on federal politicians. The premiers likely have no interest in reminding citizens that most vaccine and mask mandates, school closures and lockdowns are the work of provincial governments, not Ottawa.

For Trudeau and Liberals, the trucker convoy is a warning sign they will need to heed. The vaccination mandate for truckers was bungled in its implementation and communication strategy. Due to bureaucratic missteps, it seemed that at the last minute, the federal government would not implement the vaccine mandate.

This sent observers the message that the government was divided on how to proceed, especially given the warnings from the trucking industry of supply chain disruptions.

Before the truckers’ mandate took effect, the Liberals might have put a task force in place to monitor its impact on the industry and individual truckers.

Alternatively, Ottawa could have provided aid to allow truckers and trucking companies to shift unvaccinated drivers from international to national routes. It also could have spent more time explaining the mandate, including its temporary nature and that the United States has the same rules requiring truck drivers crossing the Canada-U.S. border to be fully vaccinated.

Instead, the Liberals assumed that the mandates would not be controversial especially given the high vaccination rate of the population as a whole. The Liberals also presumed that with nearly 90 per cent of truck drivers already vaccinated, any impact or opposition would be minimal.

The peril for Trudeau is that this rally might set a precedent for similar ones in the future. If so, his government will increasingly be portrayed as heartless by his political opponents. In fact, O’Toole is seeking to craft the perception of an uncaring and out-of-touch prime minister.

The legacy of the freedom rally will not be clear for some time. However, Canadians can be relieved that, unlike many protests south of the border — including the raid on the Capitol a year ago — widespread violence did not erupt at the rally, although police are investigating threatening behaviour toward officers, city workers and other individuals.

That could be testament to Canada’s political culture that favours co-operation, tradition and respect for authority, in contrast to the strong distrust of the state that runs deep in American politics.

Nonetheless, when the protesters head home, governments in Ottawa and the provinces will be keen to avoid similar events. Experiences with angry public demonstrations in both Washington, D.C., and around the world show protest movements are unpredictable, volatile and can have lasting consequences.