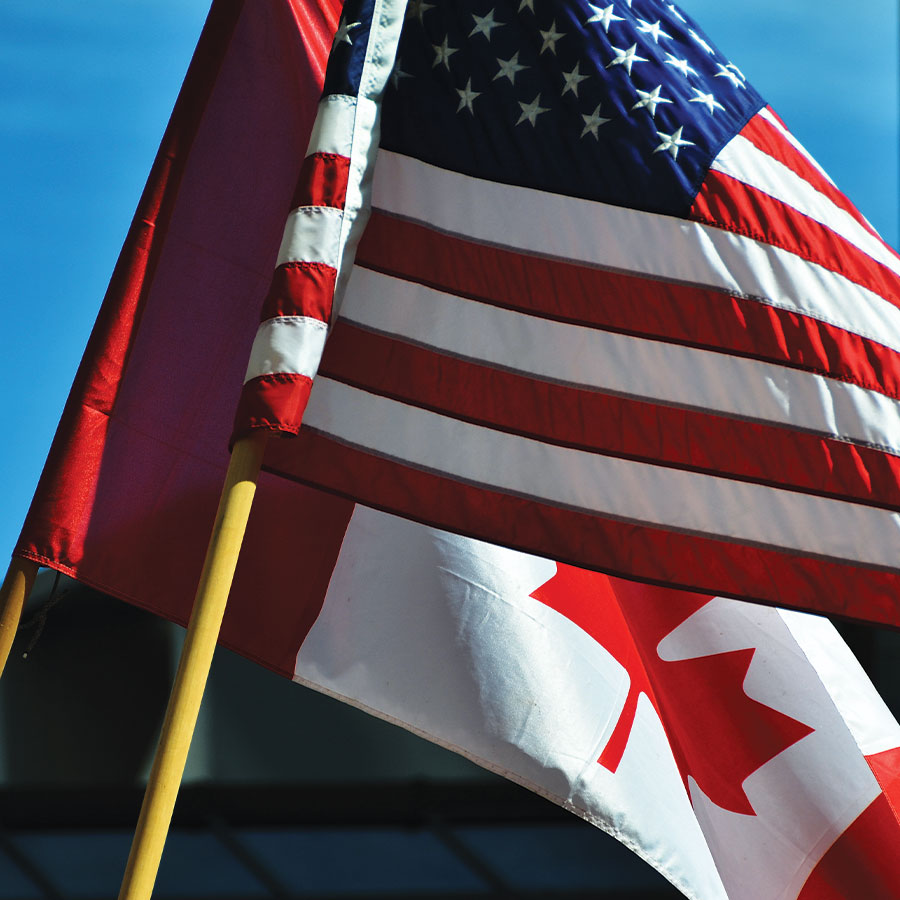 The Ottawa protest, now in its 13th day, has been marred by the appearance of hateful symbols, like the Confederate flag, associated with the aggressive populism embraced by Trump supporters and some protesters say their goal is not only to roll back vaccine mandates, but also to overthrow the government. Photo: Brian Kennedy/Getty Images

Canadians say they are concerned political strife in the United States will undermine security and economic growth at home, according to a new poll, as an anti-vaccine mandate protest praised by former U.S. President Donald Trump gripped the capital and affected the border.

The anxiety captured in the Angus Reid Institute survey provides a backdrop to protests across the country, at the international border, and especially in Ottawa, the capital, where police say Americans have provided a “significant” amount of money and organizational support.

The Ottawa protest, now in its 13th day, has been marred by the appearance of hateful symbols, like the Confederate flag, associated with the aggressive populism embraced by Trump supporters and some protesters say their goal is not only to roll back vaccine mandates, but also to overthrow the government.

“The success or failure of the United States will have a profound impact on Canada,” said Bruce Heyman, former American ambassador to Canada from 2014-2017. “Part of the more extreme nature of our politics over the last few years has now moved to occupy some part of Canada today.”

In the poll, 78 per cent of Canadians said they were worried America’s democratic discord will affect their country’s economy and security. The survey of 1,620 Canadians was conducted between Jan. 27 and Jan. 31, the days in which the Ottawa protest began.

Two-thirds of Canada’s 38 million people live within 100 km (62 miles) of the U.S. border, and the two countries are each other’s top trading partners.

The Jan. 6 anniversary of the storming of Capitol Hill in Washington last year led to a series of articles in Canadian newspapers that sounded an alarm about the resiliency of American democracy in coming years, and in particular after the 2024 election.

However, last week’s ouster of Conservative opposition leader Erin O’Toole in part for failing to embrace the protest suggests the political landscape is shifting.

“Canadians have generally looked to the United States and felt like, ‘Whatever is going on there, it’s not as bad in Canada,'” said Shachi Kurl, Angus Reid president.

“We like to think of ourselves as … a country of circumspection and compromise and friendliness, yet two in five people don’t feel that way anymore,” she said. Some 37 per cent of Canadians say there is no room for political compromise in their country, the poll shows.

Ottawa police said on Tuesday they had worked with Ohio police to track down and arrest a man there for calling in fake threats “designed to deceive and distract our emergency resources,” deputy police chief Steve Bell told reporters.

Trump last weekend spoke out in support of the truckers and called Liberal Prime Minister Justin Trudeau a “far-left lunatic”.

According to Angus Reid poll, 68 per cent of Canadians believe U.S. democracy cannot survive another Trump presidency, and 47 per cent said the United States is on its way to becoming an authoritarian state.

“The United States used to be a beacon of democracy, and now it’s exporting right-wing sedition to other democratic countries,” said Roland Paris, Trudeau’s former foreign policy adviser and professor of international affairs at University of Ottawa.

“The worse things get in the United States, the more dangerous it will be for Canada,” Paris said, calling the Ottawa protest a “wake-up call”.

Gerry Butts, Vice Chairman of Eurasia Group and formerly Trudeau’s top advisor, says “Canadians are astute observers of what’s happening in the United States, and they’re rightly anxious about it”.

“In the long term, Canada will be like everyone else … badly damaged if the United States becomes a democracy in name only,” he said.