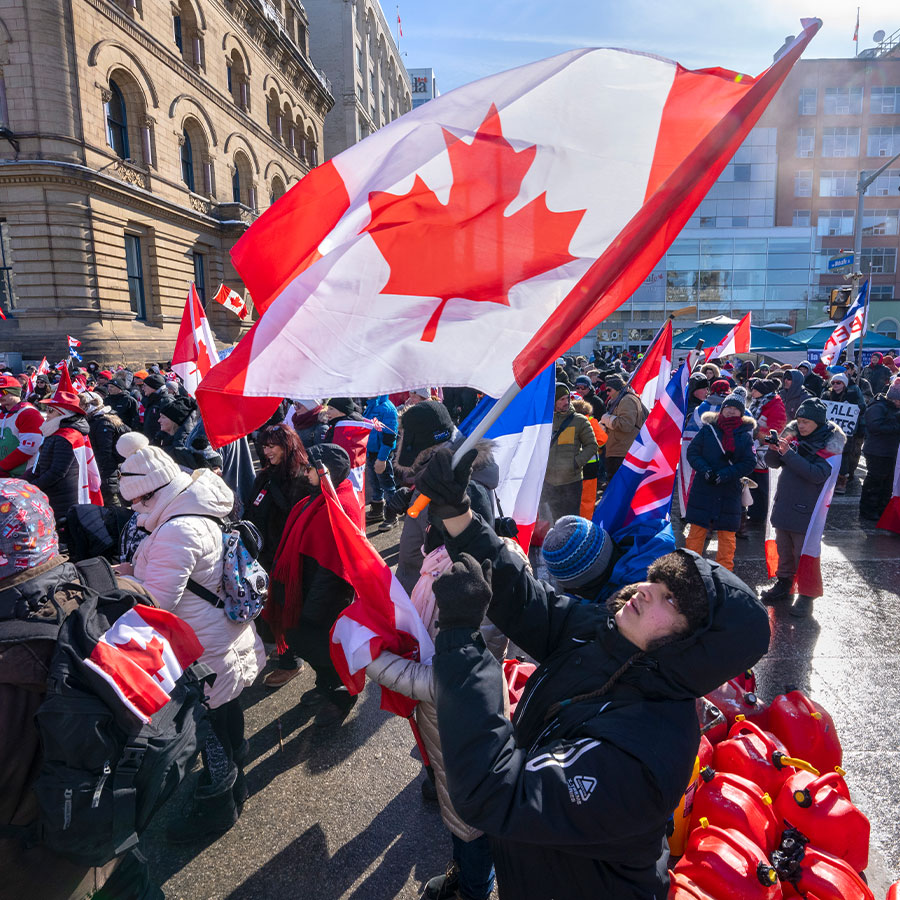 Prime Minister Justin Trudeau tried his best Thursday to convince Canadians that his government is justified in triggering the seldom-used Emergencies Act, arming themselves with the extra powers needed to remove the last of the trucker protestors who have been paralyzing downtown Ottawa since late January.

Trudeau introduced the need for the highly controversial measure in a House of Commons debate, describing the “Freedom Convoy,” which began ostensibly as a protest against vaccine mandates, but has since developed into an “illegal blockade and occupation” that cannot go on any longer.

While the emergency powers are already in effect, the government is still obliged to table a formal motion before the House of Commons, justifying the use of such extraordinary powers.

“We understand that everyone is tired of this pandemic. We understand that Canadians are frustrated with COVID. Some protesters came to Ottawa to express their frustration and fatigue with public health measures. That’s their right,” said Trudeau, who opened the debate. “It’s a right that we’ll defend in this free and democratic country. But illegal blockades and occupations are not peaceful protests.”

Is the Threat Sufficient?

Thursday’s debate was about whether the several hundred protestors who aren’t budging from Ottawa constitute a sufficient threat to the “sovereignty, security and territorial integrity of Canada,” the wording used in the backgrounder of the official Emergencies Act.

And the other question is whether the threat is dangerous enough to allow the government to resort to the drastic measures the act allows, such as prohibiting public assembly, restricting travel to specific areas and freezing protestors’ bank accounts as well as those who may be supporting them financially.

This is the first time the act, which was enacted in 1988, has ever been invoked. The current prime minister’s father, Pierre Elliot Trudeau, employed the similar War Measures Act between Oct. and Dec. 1970, in response to quell a terror campaign led by the nationalist group, Front de libération du Québec.

Deputy and Finance Minister Chrystia Freeland argued in a statement that the drastic move was necessary because the blockades “are causing serious harm to our economy, to our democratic institutions, and to Canada’s international standing.” She also warned truck drivers who continue to protest, “your corporate accounts will be frozen” and the “insurance on your vehicle will be suspended.”

Even political foes like Ontario Premier Doug Ford have come out in favour of the government adopting the controversial measures. “I support the federal government’s decision today to provide additional tools to help police resolve the situation in the nation’s capital,” he told reporters on Monday. Ford recently declared a state of emergency in Ontario to end protests that were halting traffic from going in and out of the U.S. across Windsor’s Ambassador Bridge

A recent poll suggests that two-thirds of Canadians feel Trudeau is doing the right thing by imposing the Emergencies Act. NDP leader Jagmeet Singh, who threw his party’s support behind the government’s move, accused the protestors of “coming here to overthrow a democratically elected government” with the intent “to disrupt our democracy.”

But human rights groups like the Canadian Civil Liberties Association, in a statement, accused the federal government of not meeting “the threshold necessary” to employ the Emergencies Act. “It’s there to protect the extreme threats to Canada, not to protect the economy. It threatens our democracy and our civil liberties.”

Meanwhile, members of the Conservative Party opposition expressed doubts about Trudeau’s motivations, suggesting he is making a power grab and accusing him of refusing to exhaust all legal measures before triggering what they describe as a “sledgehammer.”

“And now without even a single meeting with a trucker, without talking through one of their concerns, without apologizing for his insults and listening to what people have to say, without using any other tool at his disposal, he has used this overreach, this Emergencies Act and it’s wrong.”

“There is no national emergency, there is no threat to the security of Canada, the protests at the border were peacefully taken down and I think it’s an overreach,” agreed Conservative MP Marilyn Gladu.

But Conservative MP Pierre Poilievre, considered a big supporter of the Freedom Convoy as well as a favourite to replace Erin O’Toole as leader of the party, offered a surprisingly measured response, telling reporters yesterday; “Yes to peaceful protests. No to blockades,”

He urged the government that instead of invoking the act, they should “do what the other provinces and the other countries are doing: end the mandates and the restrictions so the protesters can get back to their lives and their jobs.”