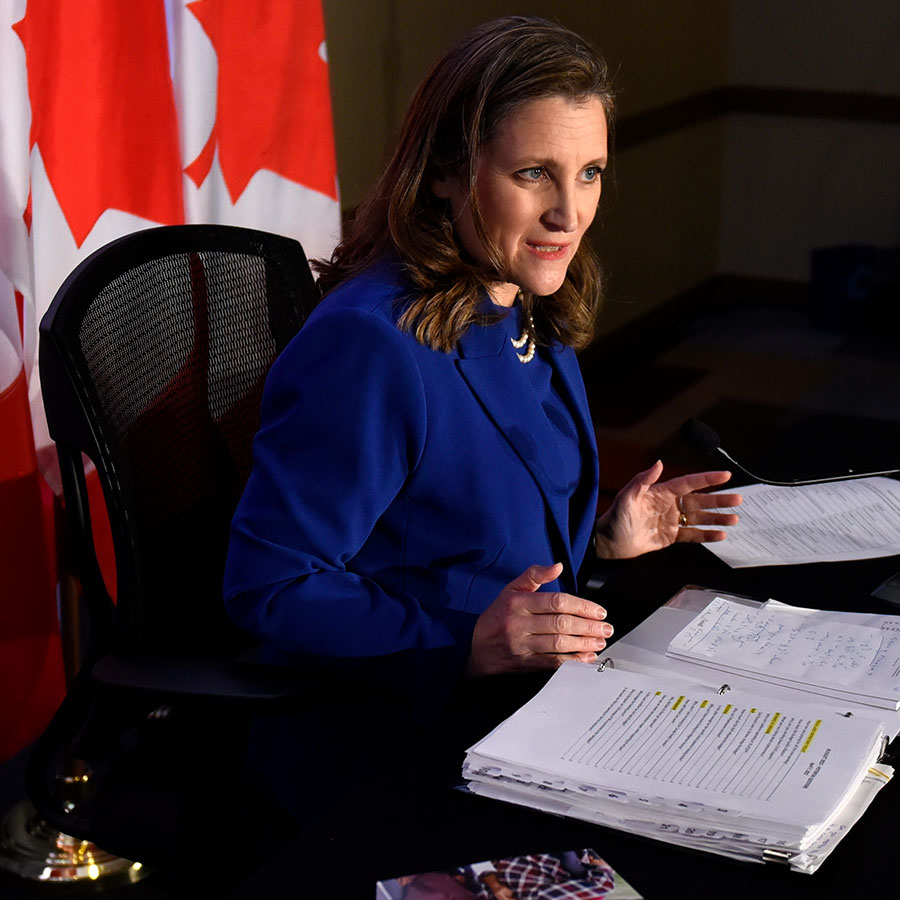 Deputy Prime Minister and Minister of Finance Chrystia Freeland speaks at a news conference in the media lockup, ahead of the tabling of the federal budget, in Ottawa, on April 7, 2022. Photo: Justin Tang/The Canadian Press

The key highlight of this budget aimed at seniors is a $5.3 billion investment to run a national dental care program for low-income Canadians. This plan starts with under 12-year-olds next year, and then expands to under 18-year-olds, seniors, and persons living with a disability in 2023. The new plan will be available to families with an income of less than $90,000, with no co-pays for those under $70,000 annually in income.

“I’m disappointed  that there were no measures to protect seniors from inflation, especially those living on a fixed income,” said. VanGorder. He noted that CARP was seeking measures such as an increase in Old Age Security, elimination of the minimum withdrawal on RRIFs and no pension protection.

“There’s also nothing new on health care,” he added, noting that measures aimed at delivering better home care, long-term care were conspicuous by their absence.

Bloc Québécois leader Yves-François Blanchet agreed that the budget overlooked the financial needs of older Canadians. “Justin Trudeau is saying to seniors, ‘you have plenty of money, we’re not giving you more.’ ”

It’s her first budget under the Liberal-NDP “supply and confidence” alliance, a deal that was signed off  by Prime Minister Justin Trudeau and NDP leader Jagmeet Singh in mid-March. This deal will see the NDP support the Liberals on key votes in exchange for legislation, such as housing, and a pharmacare and dental care plan.

In her speech to the House of Commons today, Freeland noted that our relatively strong economy informed her government’s budget planning. “Our economy has recovered 112 per cent of the jobs that were lost during those awful first months, compared to just 90 per cent in the United States. Our unemployment rate is down to just 5.5 per cent — close to the 5.4 per cent low in 2019 that was Canada’s best in five decades.”

She signalled that the government had an eye to restraining federal spending and reducing the debt. “Canada has a proud tradition of fiscal responsibility. It is my duty to maintain it — and I will,” she said.

Candace Bergen, interim leader of the Progressive Conservative Party of Canada, called the budget “irresponsible” and said her party would not support it.

Singh said he was pleased with the NDP’s contribution to the budget, noting that the dental plan would be “life changing” for many lower income people. He said that the national pharmacare plan would come next year.

The key budget measures include: