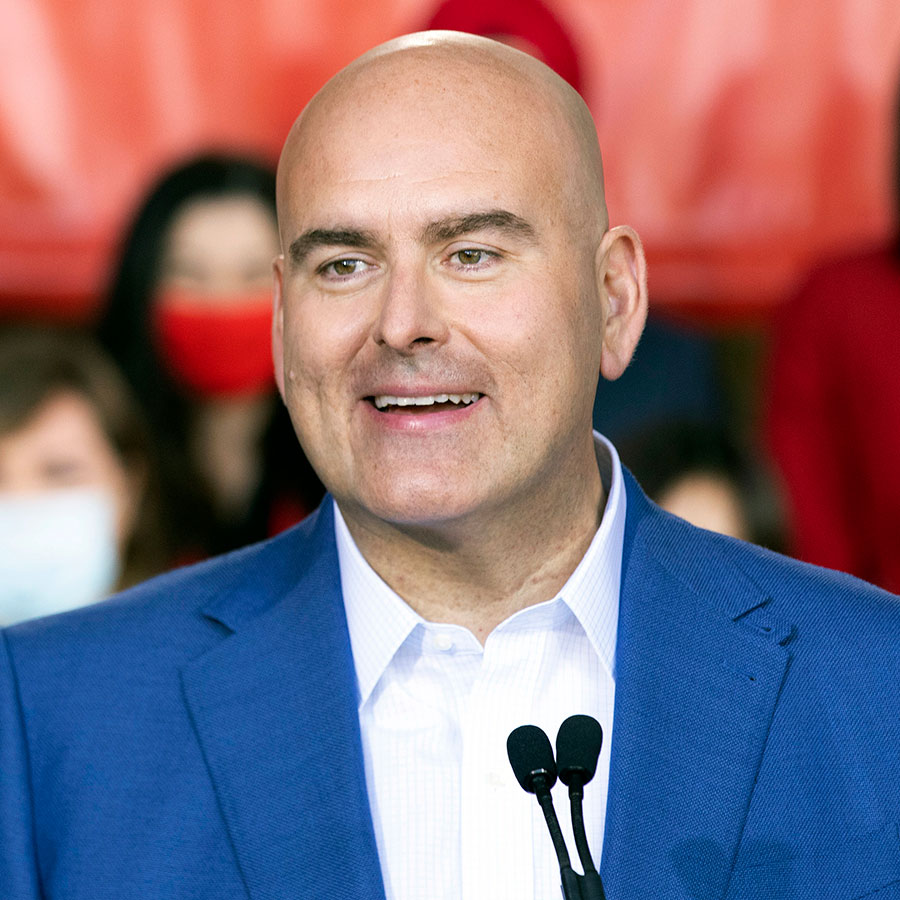 With the provincial election looming, Ontario Liberal leader Steven Del Duca — seen here in Toronto earlier this month — ended a busy week on the campaign trail to meet with CARP at its national headquarters in Toronto. Photo: The Canadian Press/Chris Young

With the Ontario election campaign entering the home stretch, Liberal Leader Steven Del Duca dropped in on the CARP national headquarters in Toronto on Saturday, perhaps hoping that by tapping into the support of older voters, he can boost his party’s fading fortunes in the June 2 provincial election.

The 48-year-old Del Duca, who replaced Kathleen Wynne as party head in March, 2020, spoke to reporters outside the ZoomerPlex (CARP is an affiliate of ZoomerMedia) and toured the facility while meeting with some of the thousands who were also on hand to take part in the Doors Open Toronto  event.

Del Duca also made history by becoming the first politician to appear on the newly launched VoxBox, the reincarnation of the famous Speakers Corner, which was launched by ZoomerMedia founder and CEO Moses Znaimer in the late ’80s and quickly became part of the cultural landscape of the city. (See below for what the three main parties are offering older voters in Ontario.)

After nailing his VoxBox moment with a concise election pitch (see above), the Liberal leader met with CARP representatives Anthony Quinn and David Cravit to discuss the CARP 5, a list of priorities for seniors in the upcoming election.

Del Duca said one of the first items on his agenda would be “revolutionizing seniors care in this province.” He not only wants to repair the system that was so badly exposed during the recent pandemic, but he also wants to make it focus on the needs of residents.

“It sickens me how our seniors homes have become institutionalized,” he said, adding that he envisions “long-term care that actually looks and feels like home.”

He also suggested that in order to protect the elderly residents from re-living the disastrous experiences of the pandemic, he would expand the number of inspections of LTC homes and enforce the fines and penalties. (See the big three’s senior-based platform below.)

Del Duca, who served several cabinet positions (as minister of transportation and then as minister of economic development and growth) under Wynne, has tried to reduce the gap that front-runner Doug Ford has on the Liberals and NDP. Del Duca has attacked the premier on his handling of health care during the pandemic as well as the building of Highway 413.

While the Liberal leader has been able to score some points on these two fronts, polls suggests that the majority of voters express confidence in Ford’s ability to handle the economy, which will stand him well at the ballot box as issues like inflation, house prices and pandemic economic recovery have become important issues.

Neither Del Duca nor NDP Leader Andrea Horwath have been able to make a dent in Ford’s sizeable lead, which has increased in recent weeks. And while there’s almost a week left until the June 2 vote, CBC’s Poll Tracker has basically declared that the only race still undecided is over which party will form the official opposition.

Over the years CARP has become a key stop on political campaigns for many years, with big-name politicians from all parties, like Paul Martin, Tom Mulcair, Justin Trudeau, Andrew Scheer, Jagmeet Singh and, most recently, Doug Ford, paying a visit to court the seniors vote.

Here is what Ontario’s three main parties are offering seniors in the upcoming election.