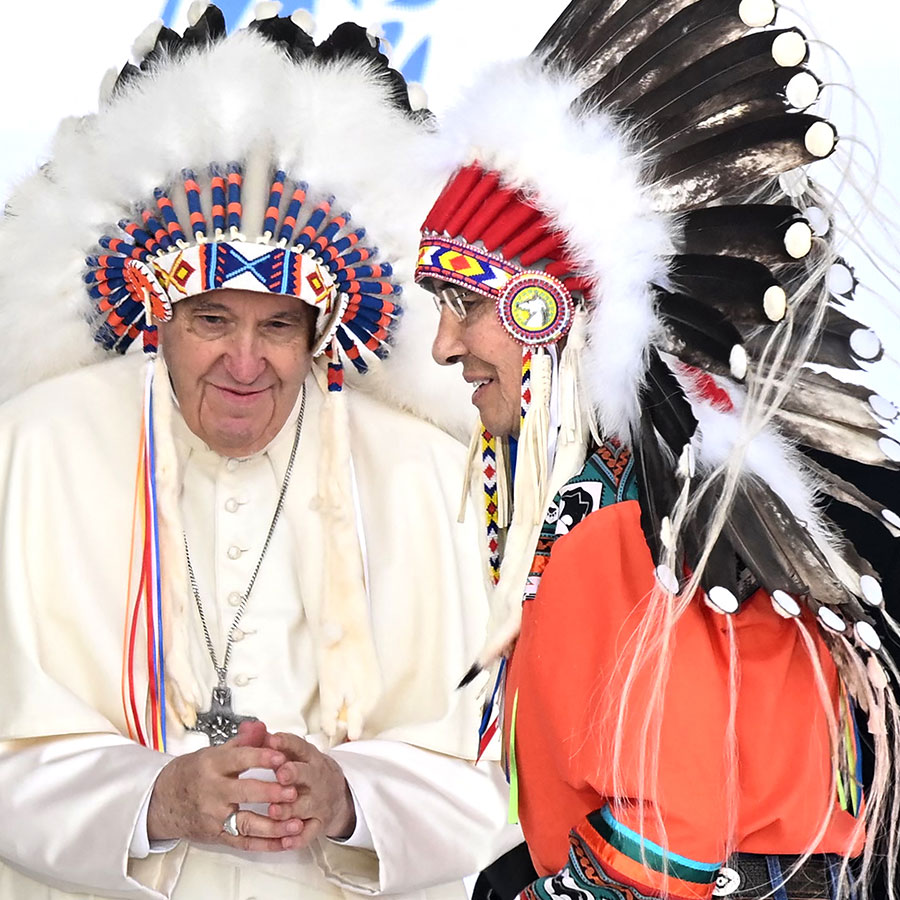 After Pope Francis delivered his historic apology to Indigenous people on the first day of his Canadian visit on Monday, it was fitting that his first mass the following day celebrated the feast of St. Anne — Jesus’ grandmother — a day in which Catholics celebrate grandparents.

The service, which was attended by 50,000 people at Edmonton’s Commonwealth Stadium, saw the Pope find common ground with the Indigenous community as he praised them for their reverence of their elders.

“In the fog of forgetfulness that overshadows our turbulent times, it is essential to cultivate our roots, to pray for and with our forebears, to dedicate time to remember and guard their legacy,” he said during the event, which was followed by his participation in a pilgrimage and Liturgy of the Word at Lac Ste. Anne, West of Edmonton.

Yet there was also a sad hint of irony in his message of honouring our ancestors. After all, it was the church-run residential school system that severed those links between generations of Indigenous people. And it was testimony from more than 6,000 residential school survivors for the Truth and Reconciliation Commission of Canada (TRC), many of whom were Indigenous elders, that applied the initial pressure for an apology from the Pope.

The residential schools, which operated between 1831 and 1996, separated more than 150,000 Indigenous children from their families, sending them to schools where they were subjected to sexual and physical abuse. Living conditions at the schools were deplorable and students were punished for speaking their native languages.

The pressure for a papal apology reached a boiling point in 2021 after the discovery of the remains of unmarked graves at former residential school sites, burial grounds for children who had died while in the custody of the schools.

Pope Francis first apologized in April in Rome, in front of an audience of Canadian Metis, Inuit and First Nations delegates at the Vatican. He expressed “sorrow and shame” for the abuse that took place in the schools at the hands of  “a number of Catholics.”

For many Indigenous elders, the apology was long overdue. “It’s only been because of consistent and persistent pressure by Indigenous peoples that finally seven years later, the Pope came over to deliver an apology,” said Lori Campbell, associate vice president of Indigenous Engagement at the University of Regina, in a telephone interview. “We saw the Pope apologize for individual characters or individual Christians versus the role that the church played in supporting the ongoing genocide and supporting sexual and physical abusers.”

Speaking at Quebec City’s historic Citadelle on Thursday, Francis asked forgiveness for the harm done by the policies of assimilation carried out in the schools, but once again stopped short of taking responsibility on behalf of the Catholic church.

“In that deplorable system, promoted by the governmental authorities of the time, which separated many children from their families, different local Catholic institutions had a part,” he said.“For this reason, I express my deep shame and sorrow, and, together with the bishops of this country, I renew my request for forgiveness for the wrong done by so many Christians to the Indigenous peoples.”

The papal apology has been met with mixed reactions from the community, particularly from survivors.

“It means a lot of things to older people who are survivors,” said Campbell, 50, who is a member of Montreal Lake First Nation and is an intergenerational residential school survivor. She suggests some are “satisfied” with the Pope’s mea culpa, while others are “feeling let down.”

What many in the Indigenous communities seemingly can agree on is that the time for meaningful action to compensate for damage inflicted by the residential school system is long overdue.

The Pope has spoken of supporting efforts to help survivors and descendants heal, but Indigenous communities have outlined a number of specific demands for the Catholic church. They include financial compensation, artifact recovery, support in bringing alleged abusers to justice and the release of records relating to the schools. Indigenous leaders are also asking the Catholic Church to renounce a 15th-century colonial doctrine issued as papal bull or edicts that justified dispossessing Indigenous people.

While some are calling the apology an important first step, Dr. Cynthia Wesley-Esquimaux, 65, chair on Truth and Reconciliation at Lakehead University, feels it’s one of the many strides made possible by those who began the fight.

“I always say if I had a great big white wall and I started to put information on that wall and sort of track everything that has happened, I think you would see the shifts,” she explained in a telephone interview.

These shifts, she said, include the 1982 repatriation of the constitution, which recognized Aboriginal and treaty rights and the 1992 establishment of the Royal Commission on Aboriginal Peoples, which focussed on finding solutions to the challenges affecting the relationship between Indigenous communities and the Canadian government as well as Canadians.

“They’re not necessarily first steps, but they’re not last steps either,” Wesley-Esquimaux said.

Meanwhile, Campbell is ready to move beyond so-called first steps. “How many first steps do we need to take?” she asked. “There have been a lot of first steps in the last decade. If it took seven years for this first step to come, we need to move quicker.”

Indigenous elders were often front and centre during the Pope’s visit, but Wesley-Esquimaux says one ceremony in particular involving Grand Chief of the Confederacy of Treaty 6 First Nations Wilton Littlechild had the Indigenous community divided.

After the apology, Littlechild, 78, a former commissioner of the TRC, presented Pope Francis with a headdress, an act that recognized him as an honorary chief and leader for the community.

But some, like Riley Yesno, an Anishinaabe writer and Indigenous rights activist based in Toronto, were frustrated to see the Pope held in such high regard.  “The church is here because it didn’t act very honourably and the church continues not to act very honourably,” Yesno told CBC News.

For many elders who experienced the horrors of residential schools, no amount of words, no matter how sincere, can undo the traumatic memories of those years.

Wesley-Esquimaux, who heard first-hand stories about the abuse her mother endured in residential schools before her passing, says addressing that trauma is “about listening.” Like any trauma, she said, “it stays there until you are able to resolve it by talking it through with people who can help you understand or reframe it.”

“If you’re sexually assaulted as a small child, it’s still there. It’s always going to be there, but it has to be witnessed.”

Campbell feels the church needs to facilitate that healing through compensation. “The church should be footing the bill for the supports that are in place,” she said. “After the recovery of grave sites started occurring the church committed to providing financial reparations so that we can have more opportunities within our community to heal. They fell very, very short of that goal.”

Under the Indian Residential School Settlement Agreement in 2006, 48 Catholic church entities signed on to fundraise $25 million for survivors. But thanks to a clause that indicated they would do so through their “best efforts,” nine years later a judge allowed them to walk away from their commitment after raising only $4 million.

The failure brought about a new promise from Canadian bishops made last September that dioceses would put $30 million toward initiatives focussing on healing opportunities for residential school survivors, their relatives and communities. Through the Indigenous Reconciliation Fund, they pledged to raise $30 million by January 2027. So far, the Catholic Church has paid a total of $50 million in compensation.

In addition to financial compensation, Campbell says she’d like to see Indigenous people at the centre of future reconciliation efforts.

“We have the capacity, we know what needs to happen,” she says. “Part of the problem is that people try to steer it from outside of the Indigenous community to have it happen a certain way and that needs to stop. It’s still patriarchal and colonizing.”