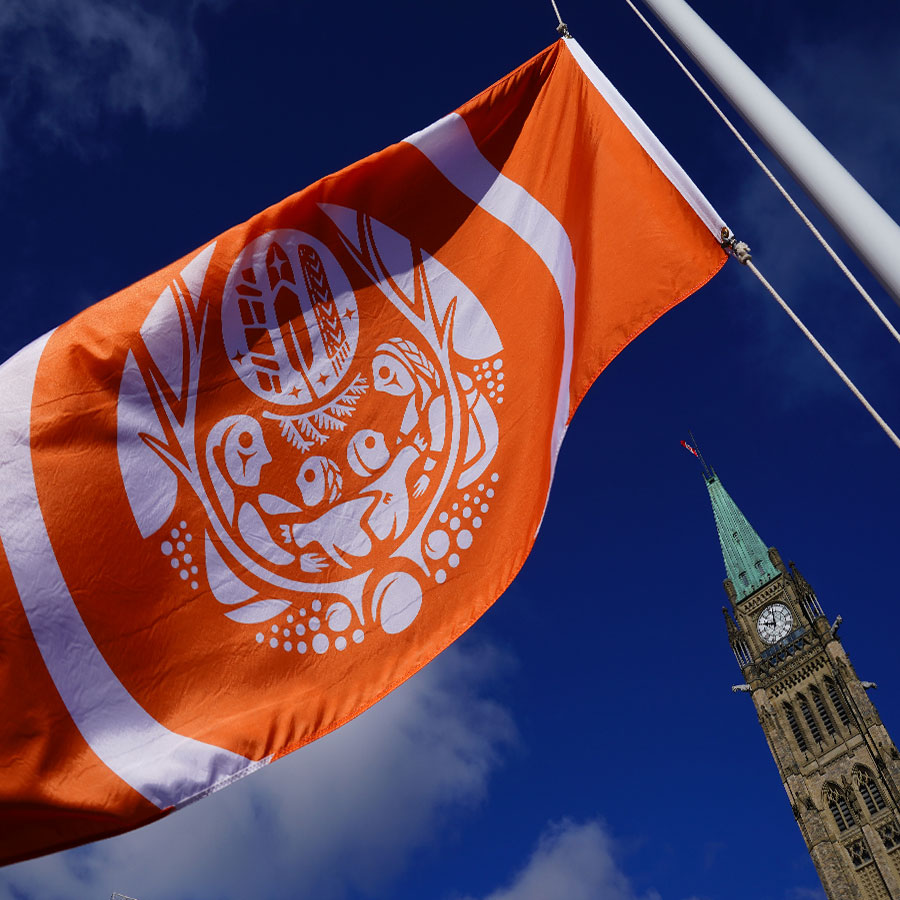 An Indigenous flag flies during the National Day for Truth and Reconciliation in Ottawa on Sept. 30, 2021. Photo: Sean Kilpatrick/The Canadian Press

On Sept. 30 Canada marks the National Day for Truth and Reconciliation for the second time since the federal government made it a statutory holiday. As Canada struggles to come to terms with colonialism and its ongoing legacies, we must also talk about what needs to be done to bring about meaningful change in the future.

This September also marked the anniversary of the UN Declaration on the Rights of Indigenous Peoples. Fifteen years ago, the UN General Assembly adopted the declaration that serves as the global minimum standard “for the survival, dignity and well-being” of all Indigenous Peoples.

After initial resistance, Canada is now positioned to be a world leader in putting these standards into practice.

Nonetheless, much work still needs to be done to meet the minimum standards of the UN Declaration and to live up to its spirit and intent.

Critically, however, the action plan is not the only requirement of the Declaration Act. It also requires the federal government to “take all measures necessary to ensure that the laws of Canada are consistent with the Declaration” and do so “in consultation and cooperation with Indigenous peoples.”

This consistency provision of the Declaration Act is every bit as important as the action plan. But with less than a year left to meet the deadline for an action plan, there is concern that urgently needed reforms to laws, policies and regulations are being overshadowed and neglected.

The vast majority of Canada’s laws were written without the participation of Indigenous Peoples and with little regard for their rights. In fact, many laws, such as the Indian Act, were specifically designed to dispossess Indigenous Peoples, curtail their rights and criminalize their cultures and traditions. Murray Sinclair, the chair of the Truth and Reconciliation Commission and former senator, has talked about the “war of law” that Canada has waged against Indigenous Peoples.

Earlier this year the government of Canada announced plans to review a number of laws with potentially far-reaching consequences for the rights of Indigenous Peoples. This includes legislation on safe drinking water, how lands are added to First Nations reserves and the language used in a standardized clause (known as a “non-derogation clause”) meant to avoid conflict between federal law and inherent title, rights and treaties.

Our immediate concern is not with any of the reforms being discussed, but with the process. Even with the best intentions, poorly designed processes can easily derail legal reform. It is not clear why the federal government chose to prioritize these particular legal issues over others. There is also little clarity on the role that Indigenous Peoples will play in deciding what reforms will be proposed to Parliament.

Additionally, comments from departments and agencies raise serious concerns about how the government understands the consistency requirement. For example, the federal Impact Assessment Agency asserts that the Impact Assessment Act — a critical flashpoint for conflict over use of lands and territories — already aligns with the Declaration and therefore “does not need to be changed.” No indication is given about how they reached this conclusion.

As the Declaration states, meaningful participation and consent are the minimum standards required of all governments. As we mark 15 years of the UN Declaration, the federal government must live up to its principles.