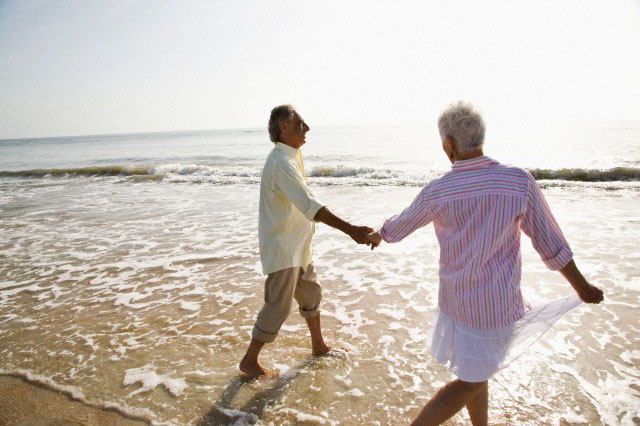 No, we’re not talking about late life divorce. Instead, some couples are keeping the knot tied while living apart for weeks or even months — sometimes even in a different country! Contrary to what you might think, work obligations and caregiving responsibilities aren’t always the cause. Some couples simply have different dreams when they leave the workforce.

Are you surprised that 24/7 togetherness isn’t everyone’s idea of a fulfilling retirement? Various surveys conducted have found many spouses aren’t on the same page when it comes to life after work. For instance, a 2009 Fidelity Research survey found that 42 per cent of couples had different ideas what their lifestyle would be like during retirement. Other research has shown that couples can’t always agree on where — or when — to retire.

Perhaps it isn’t too much of a stretch that couples are finding happiness living apart. Consider the case of John and Jane Chatfield as told in in a 2011 ABC News report. Their dream to retire in Maine didn’t quite turn out as planned: he loved the area and the lifestyle, but she didn’t — especially after the first winter. Now she enjoys the vitality of city life in Cambridge, Massachusetts during the chilly months while he enjoys his retirement retreat in Maine. While you might think living apart would weaken their relationship, the couple reports the opposite has happened. While they miss each other, they have found independence and happiness being apart.

– One spouse wants to travel or volunteer overseas while the other one prefers to pursue activities closer to home. (A second couple in the ABC report are both avid volunteers — one at home, the other abroad.)

– One spouse wants to live in a different place during the winter or summer. For example, one partner may prefer the cottage life most of the year while the other wants to return to the city in the fall.

– One partner wants to move (temporarily) to pursue a life-long goal like starting a new business or getting a university degree.

Not surprisingly, the concept has met with mixed reactions from bloggers and writers — not to mention their audiences. (For instance, the bloggers behind Satisfying Retirement and Bucksome Boomer have generated some interesting conversation.)

How does the debate play out? Some critics say relationship issues are at the root of this trend and blame a lack of commitment and an inability to compromise. Some argue that living apart isn’t really “marriage” — or a very good one — if spouses would rather be apart. While it’s healthy to enjoy separate interests and activities, living apart is taking things a step too far.

Besides, who can afford it? Recent news suggests that many people can’t afford to retire at all, let alone live out their dream retirement with or without their spouse.

Others point out that many happy, committed couples already spend time apart due to work, caregiving or other responsibilities. While this choice isn’t for everyone, many couples aren’t threatened by spending time away from each other and may even be better off because of it. Some argue that when spouses are happy and fulfilled, their relationship is stronger. Both spouses may not be willing or able to volunteer abroad — so should one spouse give up a life-long dream? While marriage is about compromise, how much should people have to sacrifice?

What to consider first

Ultimately, it’s up to couples to decide how they want to live. While you won’t find a lot of advice on the topic of separate retirements, sound retirement planning strategies are even more important.

Here’s what you might want to think about if retiring apart while staying together sounds appealing:

What do you want in retirement? Experts are always telling us to start thinking about what activities and interests we want to pursue when we retire — like hobbies, sports, travelling, etc. Obviously, you can’t predict everything in advance, but you shouldn’t wait until retirement to spring on your spouse that you’ve always dreamed of living in a different city or want to travel through Asia for six months. Figure out what your “deal breakers” are — and what you’d be willing to do alone.

What are the costs, and how can you save for them? Knowing what you want is half the battle — paying for it is another story. Experts warn couples should plan together and gear their savings towards their anticipated retirement lifestyle. For example, if you plan to travel extensively, you’ll need more savings than someone who enjoys staying close to home — but you’ll need a little less if only one person is travelling. If you plan to live apart for part of the year, don’t forget to factor in the cost of that second home.

How will household duties be divided up? Divvying up the household chores when couples are living in one can be hard enough let alone two. Be sure to think about the little things like who pays the bills and who does the cleaning and yard work? What is the stay-at-home spouse expected to do while the other is away?

How long will the arrangement last, and what is the next step? Life can disrupt the best of plans as declining health and mobility, caregiving responsibilities, financial costs and other issues can impede on any retirement lifestyle. Think about how and why things will have to change and try to plan for some emergencies and contingences. For instance, spending winters apart may work until it becomes to expensive or one spouse can no longer live alone. It can help to anticipate the limitations.

So is “separate retirements” really the latest retirement trend? Not so fast: while there are inspirational stories, there currently isn’t any data to indicate how many couples are embracing this idea. Besides, it doesn’t matter what the trends say — the best retirement is doing what works for you.