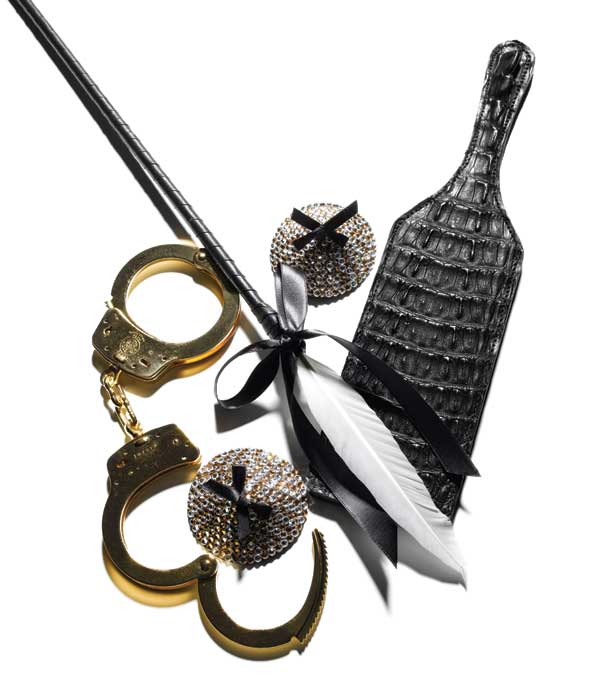 Elbows on the bar, Ted winked at me naughtily. “My buddies are all for that book. Seems it gave their wives ideas.” That book, of course, is 50 Shades of Grey, the rather florid romp through the titillating topic of spanking.

There are many misconceptions about “that book,” but there is no arguing with the fact that the three-volume opus, which began life as online serial Twilight fan fiction, is the fastest selling paperback of all time, even faster than Harry Potter and busting outmoded genre moulds. Britain reports sex-toy sales spiked 300 per cent this past summer to jibe with the book’s mainstream paperback release (it was at first available only on e-readers). Anything mentioned in the books – love beads, silk hand restraints, horsewhips – trended on Amazon.com along with the volumes.

So why are we suddenly so open to a walk on the wilder side? Author E.L. James struck a nerve with 50 Shades by using a tried-and-true romance formula. Boy, wise in the ways of the world, seduces naive virgin girl: the “transgressive” elements of the story, which include a domination contract and fairly tame slap play, are firmly rooted in an old-fashioned love story. After a thousand or so pages of negotiations over sexual compatibility, the protagonists fall in love and have a car full of children and default to what the author dubs “vanilla” sex. The shame of the overall message is that Ana Steele “saves” Christian Grey (of the title), who was into domination because of his emotional scarring. I do wish her characters could simply be into a little kink without it being hog-tied to emotional damage.

Two decades ago, I went to a fetish bar in the pursuit of a magazine story (yes, journalists always use that excuse!). What I learned that night took nearly 20 years to sink in. Sexual identity and exploration thereof is a lifelong journey. I went in dressed in what I imagined would be a dominatrix outfit, leaning heavily on some thigh-high lace-up boots. It took a foot fetishist I struck up a conversation with in the beer lineup about 10 seconds to inform me I was no domme. In my mid-20s at the time, the wheels didn’t click into place. What I left with that night was a sense of wonder at how open that basement full of gagged and bound souls were about their predilections. A fetish night is a safe place for people to act out their fantasies, and it was indeed way out there with a dog collar and whipped cream on it.

I couldn’t yet imagine a way that this outre behaviour related to a milder, safer version of sex play with a little edge to it. This was the era when art was just lapping at the fringes: Helmut Newton, Robert Mapplethorpe, even Madonna’s Sex book brought racier images into our imaginations.

We all crave a little danger in sex, even Dr. Oz will tell you that. However, with the mass affirmation that comes along with 250 million in sales came flutterings of outrage, led chiefly by Katie Roiphe, the date-rape polemicist. The Ana character is a submissive; Roiphe and indeed feminists of most waves reflexively tamp down any flame-up of the politics of power in the bedroom. But contrarian Camille Paglia, the polarizing force of the ’90s, argued that a lust for aggression is in our blood and that sex and power can’t be separated. She also maintained that romance is decadence. And what 50 Shades is at its heart is a decadent romance.

If you came of age in the golden era of feminism, you may still gag at the reduction of such charged issues into literotica. Morals are immutable, but social mores are fluid and these treacly tales are a reflection of changing times. And what critics missed about 50 Shades is that sexual identity and predilections do not necessarily correlate to day-to-day life: dominance is different from bedroom to boardroom. And in a mainstream context, we are talking about play here: there is no reason why a consensual couple can’t switch it up and take turns on both ends of the paddle.

The 50 Shades hero and heroine are youngsters, but their antics are turning on Ted’s friends’ 50-plus wives. And so? Enthusiasm and curiosity are the healthiest ingredients you can inject into any interpersonal relationship. Sometimes you want to be spanked for being good.