A Joke? Not in France 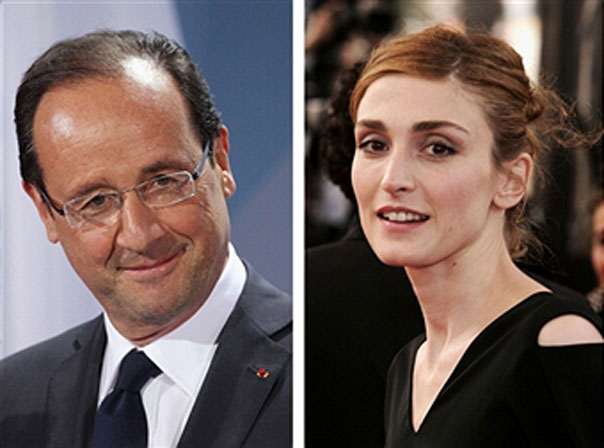 French President Francois Hollande and his partner Valerie Trierweiler walk in the courtyard of the Invalides in Paris on June 11, 2013. Photo credit: CHARLES PLATIAU/AFP/Getty Images

What do the best joke at the Golden Globes and the French presidency have in common?

The joke: “ ‘Gravity’ is nominated for best film. It’s the story of how George Clooney would rather float away into space and die than spend one more minute with a woman his own age.”

The French presidency: Francois Hollande, 59, has been caught cheating on his partner and first lady of France, 48-year old Valerie Trierweiller, with actress Julie Gayet, 41.

The age difference between the latest mistress and the former mistress isn’t that great, but Hollande has a habit of trading down (up?).

The longtime partner he cheated on with Trierweiller, is Segolene Royal, the mother of his four children, who is 60.

It seems that Monsieur Le President would also rather float away into space and die politically than spend more time with a woman his own age.

But maybe the French are different.

The leading man of the land has never married his partners, including Royal, and his constituents don’t seem to care who is in his bed or how many beds he has.

It’s likely they’re impressed with the bravado of a 59-year old man who rides a motor scooter through the streets of Paris in the dark of night to secretly “visit” his much younger mistress.

Right now the French seem more concerned about whether Trierweiller, who has taken to a hospital bed to recover from the shock, continues to qualify for state perks as the official partner (unofficially the First Girlfriend) of le president.

Demonstrating sexual potency and status by partnering with younger women is a given for many aging men who have the means and desire to make it happen.

But, says Leonore Tiefer, sexologist and associate professor of psychiatry at the New York University School of Medicine, “younger women and older men are a two-way street.”

She explains, “It’s not just about what men want. Women want the appreciation/recognition/adulation and the financial help.”

Also, the author of “Sex Is Not a Natural Act” told Zoomer, “Viagra has changed the dynamic — somewhat. It’s given more men incentive to use their ability to attract younger women who want that kind of relationship and allow them to get sex in return.”

More and more, however, the winter/spring sexual partnership is no longer a men only phenomenon.

“As women gain economic and social power, and physical confidence, there will be more older women/younger men relationships — for exactly the same reasons,” says Tiefer.
Funny as the joke was about George Clooney at the Golden Globes, remember that Sandra Bullock — Clooney’s partner in the space movie — used to date Ryan Gosling, 16-years her junior, before Gosling hit the big time.

But here’s the best news for boomers.

According to Tiefer, “Older people offer a completely different palate of rewards.”

But that’s another story.