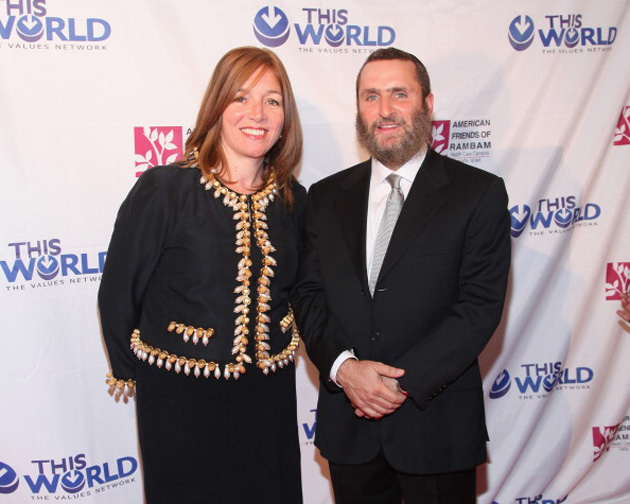 (Celebrity rabbi? Whoever heard of such a thing? Yes, really. Check out his bio.)

The author of bestselling Kosher Sex will be talking at IdeaCity at 9:23 a.m.Thursday about values and relationships — how we relate to each other and to the world.

And, of course, he’ll be talking a lot about sex.

So how does an Orthodox rabbi come to be so interested in sex and preaching about it?

You’ll be surprised at what Rabbi Shmuley believes about what makes marriage go bad.

That’s what he’ll talk about Thursday at ideacity, he told me: “that love has destroyed marriage and relationships.” The very foundation is flawed, he insists.

“Love is a very weak force. It’s comfortable but it’s not a nuclear force. It doesn’t have the power to keep a relationship going.”

“Deep, unquenchable lust,” says Rabbi Shmuley, “is what a relationship is supposed to be built on.”

He refers to the “conscious uncoupling” of Gwyneth Paltrow and Chris Martin. They’re typical, he says, of European relationships that aren’t expected to last but rather are serially monogamous.

In other words, love may be the bricks that build a marriage but lust is the cement that holds it all together.

“I believe that at the core of marital corrosion and rot is loss of desire,” he says. “It’s the 900-pound gorilla in the room. Money and kids become more important than each other. In an unhealthy marriage, kids come first.”

So how can lust be maintained as relationships and people age?

By following the example of how the late Steve Jobs marketed Apple products, says the Rabbi,who admits to having been fascinated by Jobs.

“He didn’t want people to love Apple products. He wanted to people to lust after his products.”

And lust,” he says, “is based on unavailability, mystery and sinfulness. Lust is not necessarily of the flesh and is not determined by age. Jobs could make people lust after a phone! And we are capable of bringing that lust to marriage.”

Jobs did three things to provoke lust, says Rabbi Shmuley. He made people wait for his products (unavailability), he never talked about his products (mystery) and he always positioned Apple as the rebel, the upstart (sinfulness).

Marriage, he says, does the opposite. “It’s about constant availability, absence of mystery and it’s legal! We need to rethink the institution of marriage.”

Talking about secret sexual fantasies can be one way re-ignite lust, he suggests.

“The average wife has fantasies about other men,” he says, basing his assertion on counseling “thousands of women.”

“But husbands don’t know that,” he says. “The average husband thinks his wife is only attracted to him. They should quiz their wives about the men they’re fantasizing about.”

But, um, isn’t that kind of dangerous? Can husbands really handle that knowledge?

The rabbi has a ready answer.

And people go to extreme lengths to escape that.

And more often than not, they don’t know how to play that game with their wives.

Provocatively, Rabbi Shmuley has written about how “men make the mistake of thinking that a wife wants primarily to be loved, when in fact she principally wants to be desired…they are primarily looking for lust. A woman wants to be wanted, needs to be needed, desires to be desired.”

But for many long married couples, he says, marriage becomes “ a pragmatic partnership: making and raising children, shared values, finances. But who wants a partnership at night? You want someone you pine to come home to.”

The good news for couples is that you don’t need a new body to experience lust.

Rabbi Boteach will have a lot more to say about relationships and sex at ideacity, even though he’s scheduled for only the usual 20 minutes allotted to each speaker.

Ideacity will be held this year on June 18-20 at Toronto’s Koerner Hall. Can’t attend in person? Check out the free live webcast here!