Wait for It: More Sex After 50 Years of Marriage 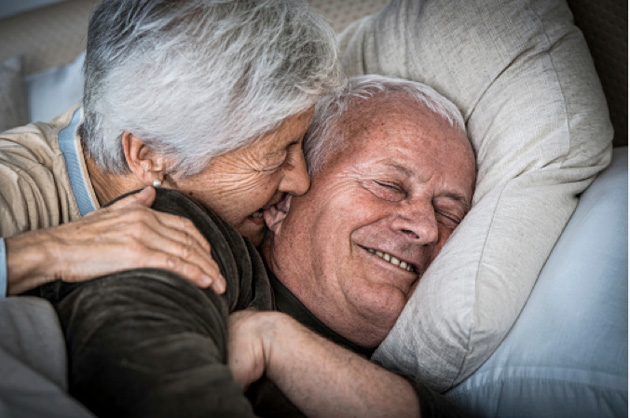 Here’s something to look forward to: marital ‘long-timers’ have a ‘modest rebound’ in sexual frequency after 50 years, say researchers.

They also have good news for spouses who have stayed together through thick and thin: older people still in first marriages have sex more often than those who have remarried.

But frequency aside, marriage order made no difference when it came to actual physical pleasure and emotional satisfaction, say researchers from Louisiana State University, Florida State University and Baylor University.

Their new study shows that, while people in the early years of marriage have sex more frequently, and their sexual activity tapers off over time, a slight rebound occurs for those whose marriages endure longer than half a century.

Researchers analyzed the relationship between marital characteristics and sexual outcomes among 1,656 married adults ages 57 to 85.

They noted that people who survive until their 50th year of marriage — among whom the slight rebound occurred — are relatively few in number.

Nevertheless, the study provided “intriguing results” for one of the fastest growing age groups — and one whose sexual behavior rarely has been studied.

One uncertainty that could be the subject of future research is the “why” of the findings. While sex becomes less of a novelty over time and frequency tends to diminish, “it may be that the permanency of the relationship contributes to sexual relations picking up a bit at the end,” says study co-author Samuel Stroope.

“Growing old as a couple, with the experience and knowledge that come with that, may play a part,” he said. “You are able to learn about your partner and build on that over time. You may have a higher level of trust when you feel that your spouse isn’t going to go anywhere. The expectation that the relationship will continue may give you more reason to invest in the relationship — including in sexual aspects of the relationship.”

As to why “remarrieds” have less frequent sex than those in first marriages, “it may be that those who have been married in the past may not have as strong of a sense of permanence or lasting investment,” Stroope says.

Co-author Jeremy Uecker, an assistant professor of sociology at Baylor, notes that “we know a great deal about sexual behavior at younger stages of the life course. This study adds to a small but growing body of research on the sexual behavior of older adults.”

Adds Stroope: “As people age, they tend to be more even-keeled, which may help cut down on marital conflict and facilitate regular sexual activity into advanced age.”

The findings may surprise some in a society in which youth is the ideal and older adults are often subjected to ageism, researchers say.

Despite stereotypes, the study joins other research in revealing that regular sexual activity remains a part of many older adults’ lives — even with declining health and the death of a spouse on the horizon.

The study — “Marital Characteristics and the Sexual Relationships of U.S. Older Adults: An Analysis of National Social Life, Health and Aging Project Data” — is published this week in the journal Archives of Sexual Behavior, the official publication of the International Academy of Sex Research.