Happily Unmarried is the New Norm 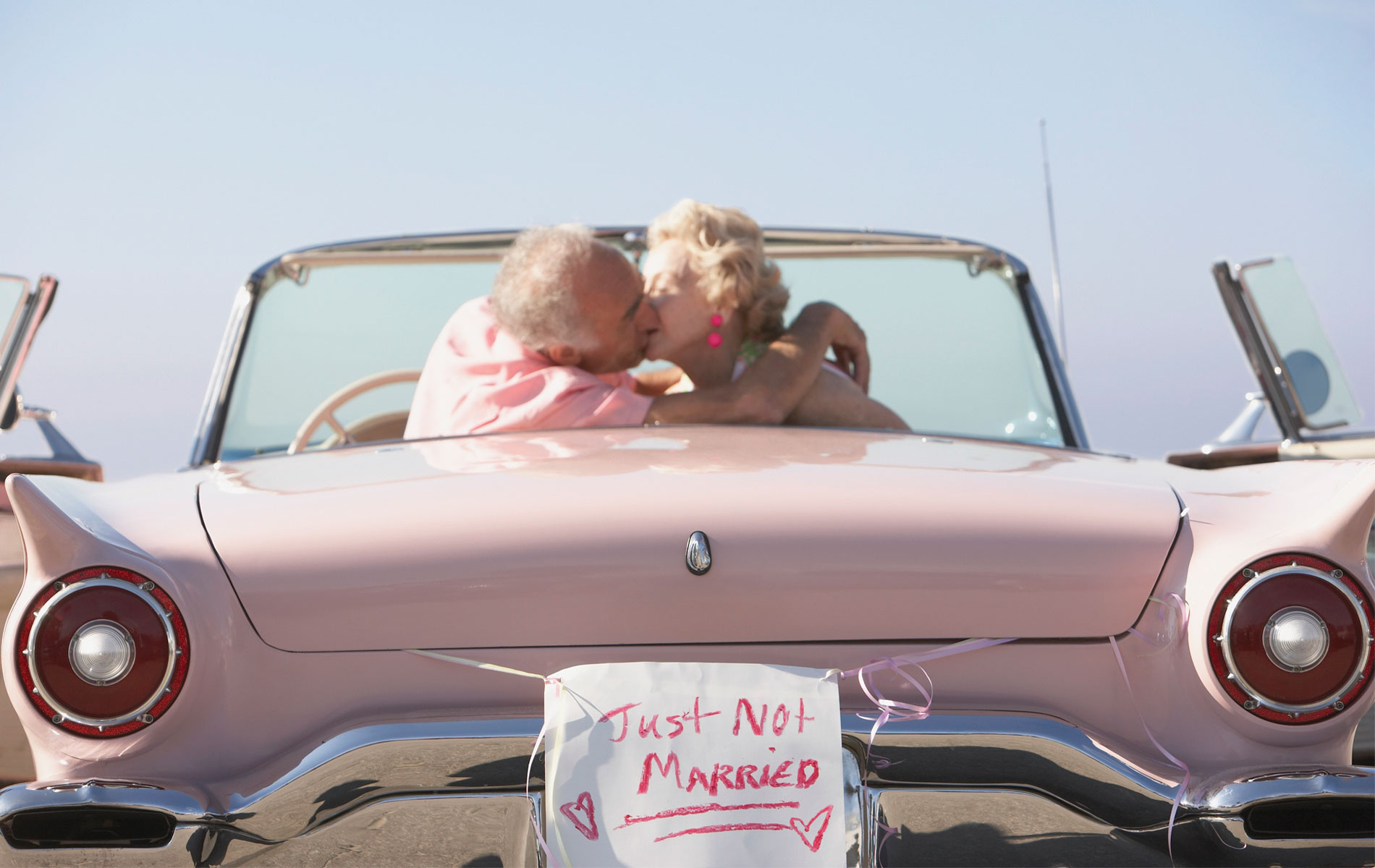 To do it or not to do it? That is the question. Just ask Oprah and Stedman, Kurt and Goldie or Rupert and Jerry.

The commercials began papering the TV-sphere early in the New Year—a time of new beginnings and reanimated diets. Oprah Winfrey, up close and soulful, stared right into the camera and solemnly declared, “I. Love. Bread.”

Then, in case you missed it, she said it again, with all the certitude of Ronald Reagan telling Gorbachev, “Tear down this wall!” Oprah loved bread, and she didn’t care who knew about it.

You get a loaf! You get a loaf! And you get a loaf! At the behest of Weight Watchers (which she had purchased a $43 million stake in), she was letting it be known that she sought to lose weight without sacrificing any crumbs, shining a shard of light on a world gone gluten-spooked. And, yet, for veteran Oprah-watchers, it was also something else: in addition to it being an echo of a long-ingrained narrative (who can forget her wheeling out a wagon of fat on her show?), the public avowing of bread only helped to underscore the lengths to which the media Titaness has gone on to keep it unofficial with her long-time beau, Stedman Graham.

Last year, in 2016, marked the three-decade mark of Winfrey and her man, Graham—central-casting handsome yet limelight shy. Thirty years of non-wedded bliss, though one that she’s described as a “spiritual union.” Thirty years making like dog-like years, indeed—considering that, in celebrity relationship-metrics, this is a time span that howls back to an era before Brad Pitt and Gwyneth, let alone Brad and Jen, or Brad and Angie. (Indeed, the relationship even wound up outlasting Oprah’s show!)

Next: When Oprah met Stedman

The course of love never did run…same. But in a time when many still see tying the knot as the default, these two have joined a medley of couples, celebrity or otherwise, bucking tradition. In a time where marriage is still looked upon by many as the crescendo of a symphony, Oprah and Stedman have simply chosen to rewrite the score.

Having toyed with marriage and actually been engaged at one point in the ’90s—the wedding was called off—the couple, who first met at a charity event in Chicago in 1986, have, of course, endured all the sniping and the speculation that’s a fixture, possibly, of all unmarrieds: How real is it? The question itself—putting aside the Oprahness of Oprah—is one that possibly speaks to the discomfort that still rings in society about the curious alchemy of unwed companionship. Not to mention, a decision not to enter into an institution about which Robert Louis Stevenson once quipped: “Marriage is a friendship recognized by the police.”

Or by higher office as in the case of the Right Honourable Adrienne Clarkson. The former journalist had lived in unmarried bliss with her long-term partner, the philosopher and writer John Ralston Saul, when in 1999 she was tapped to serve as Governor General. She married Ralston Saul that year. A coincidence? We think not.
“If I had wanted to get married, I could’ve made the time,” Oprah, now 62, extrapolated some years back. “I’m not a traditional woman and I haven’t had a traditional life and I think that had Stedman and I gotten married, we certainly would not have stayed married.”

If nothing else, it does offer a stark contrast to the always-turning ferris wheel of celebrity divorces (which we keep count of and mercilessly deconstruct because, naturally, we project our anxiety about monogamy and marriage and family onto them). Take the evidently half-glass-full billionaire Elon Musk and his wife, Talulah Riley, who announced, in March, that they were divorcing—for the second time. Their premier trip to the altar in 2010 had ended with a divorce two years later, with a medley of reconciliation and break-ups since.

Next: It’s not for nothing that marriage is referred to as a “leap”

What is marriage if not unguarded optimism in holy matrimony? It’s not for nothing that marriage is often referred to as a “leap”—as perhaps 84-year-old Rupert Murdoch might be able to tell you something about. Playing out his latest hoopla-wedding earlier this year—a vignette right out of Dynasty or Empire—the three-times-already-married moneybags took Jerry Hall (the 59-year-old ex-paramour of Mick Jagger) for better or for worse, all the while providing for one of the most madcap family blendings ever. Under a U.K. sky taunting drizzle, Hall’s four children with Jagger joined Murdoch’s six children (ranging in age from 57 to 12 from those three different mothers), filing into St. Bride’s Church on Fleet Street for the Big Day. Pass the confetti.
Weddings are so hardwired into the narrative of our lives—from The Merchant of Venice to Charles and Di—that the contrary decision almost always seems to suffer from a dearth of mythical rah-rah-rah. Alas, in the Hall of Fame of non-marrieds, there is Kurt Russell and Goldie Hawn, who’ve been together, in all ways except on paper, since 1983.

Points, too, go to Tim Robbins and Susan Sarandon, who split in 2009, but were together for 21 years, which is a hell of a lot longer than most actual Hollywood marriages, and is worth pointing out if only because it goes to show that not marrying is no sign of foreverness any more than marrying is.

Ditto, Mad Men‘s Jon Hamm and writer-director Jennifer Westfeldt, who were together for 18 years, from 1997 until they announced their surprising split last year. “Jennifer is more than just a girlfriend,” he’d once said. “What we have is much deeper, and we both know that.”

And who’s to deny that? To say that love’s roominess can only be confined in the slim confines of that two-syllable word that is marriage?

Next: Reclaiming the word “spinster”

Indeed, the stats now shout that around the world and in North America, in particular, the demographics have been leaning toward non-marrieds for many decades—or at least toward those putting off their to-have-and-to-holds. Back in the early 1960s, the median age for marriage in the U.S. was 22 for grooms and 20 for brides – vis-à-vis, today, when the median ages for first marriages hits highs of 29 for men and 27 for women. In Canada, as of 2015, approximately 1.2 million Canadians between the ages of 45 and 89 are living common-law. In terms of proof that marriage makes you happier, the jury is still out. To quote the longest running longevity study, which is the Terman Life-Cycle Study, started in 1921, “The 1,528 men and women, who were 11 years old when the study started, have been followed for as long as they lived. Two groups of people lived the longest: those who got married and stayed married, and those who stayed single. People who divorced, or who divorced and remarried, had shorter lives. What mattered was consistency, not marriage. The results were the same for the men and the women.”

Moreover, there have been attempts of late by women to reclaim the word “spinster,” most notably by author Kate Bolick, who wrote a book titled with that very word, in which she attempted to turn what was a derogatory label and assign it a new meaning, “shorthand for holding on to that in you which is independent and self-sufficient.”

In addition, as Bella DePaulo has further crystallized in her sweeping book on the subject, Singled Out: How Singles Are Stereotyped, Stigmatized and Ignored, and Still Live Happily Ever After, “Americans now spend more of their adult lives single than they do married” once you factor in the divorced, the widowed and the never-wed. And yet, she points out, there are umpteen ways that society still favours the married, especially in the U.S.—like the reduced health-care rates offered to spouses.

But married people live longer and are happier, no? Isn’t that what all the social science has shown for eons?

Next: The lifeline of happiness

DePaulo plucks those statistics, too, citing instead a high-quality study called “The Lifelines of Happiness”, first reported in the Journal of Personality and Social Psychology. What that 18-year research study (asking both married and single people to rate their degrees of happiness annually) showed is that quantifiably, “you can see how happy the participants were in the years before getting married, how happy they were in the early years of marriage and how happy they were later on” and, actually, what was found is that “there was a little blip around the wedding and honeymoon, but overall it showed that people who were happy before getting married were happy afterwards and the people who weren’t happy before getting married aren’t happy now.”

Happiness, that is to say, was less predicated on any particular institution or life pivot and more on hard-wired personalities.

How’s that for an a-ha moment?

And, so, at this holy juncture of 30 years of Oprah and Stedman…a toast! Theirs may not be a traditional relationship nor involved the “throwing of a bouquet,” but they do continue to bear time’s testimony to one another in their own way. And, well, find time to do the most couple-y of things—like breaking bread.

In fact, not long ago, the multi-billionaire revealed that, among their customs, is her making him a so-called “love sandwich”—a savoury, melted panini, complete with gooey pepper jack cheese, smoked turkey, scallions, tomato and avocado.

Her “homemade blueberry pancakes” are also “fantastic,” Stedman piped in. “They’re to die for.”