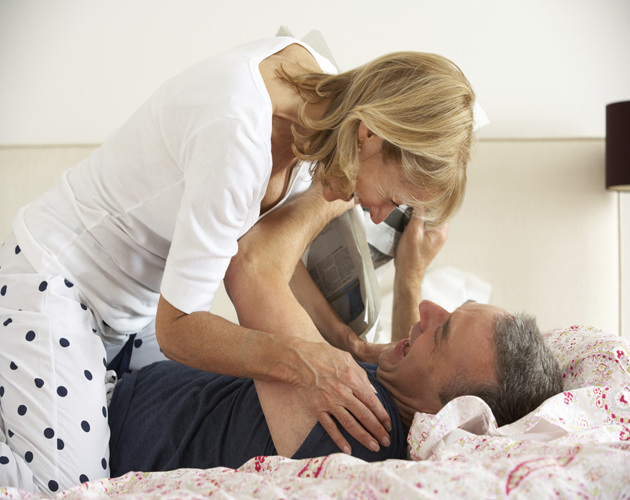 It’s a big trend for our generation: couples in committed relationships, completely monogamous, but not living together.

I had a hard time deciding on an appropriate gift. The occasion was an engagement party, and the couple had already been living together—for 18 years!

Our first thought on hearing their news was: why?

“At some point, I was in the right place,” Michael Hartrick, the 62-year-old groom told me. “She was kind and loving enough to wait around while I got to where I needed to be.” The idea of making a romantic proposal came upon him suddenly last summer. Michael is a lawyer, and it hit him when he was coming out of a hearing. “I don’t want to sound like a nut—I didn’t hear voices—but there was a thought that came into my head that I needed to go and look at engagement rings that day.”

Isn’t it risky to change the foundation of the relationship after all that time? Over the years, I’ve heard stories about couples who tie the knot after lengthy cohabitations only to separate a short time after. Just when I was beginning to wonder if those anecdotes were apocryphal, there was the news about publishing magnate and former Parti Quebecois leader Pierre-Karl Peladeau. Last summer, he married TV personality and producer Julie Snyder in a wedding that was the social event of the season in Quebec. They had been together for 15 years and have two children. Their split made headlines less than six months later.

“That piece of paper does create a psychological shift, and the expectations change when you’re married,” says psychotherapist Minni Sharma, who specializes in divorce and other relationship issues. She says she has seen many long-term relationships become more stressful after marriage, and that is just one of the reasons she is surprised by Michael’s story.

In her experience, the big trend for our generation is Living Apart Together.

“It’s the new thing for boomers in particular; they’re in committed relationships, they’re completely monogamous but not living together,” she tells me. “Believe it or not, it’s women who are making the decision to be LATs—sometimes they are called Apartners—because men want to be married and move in together because they get taken care of.”

The reasons are also usually financial—when each partner wants to be able to leave their assets to their own children. Sharma says that can get complicated when you live together, even though common-law spouses don’t automatically get property rights.

“There’s that fear for the children—Oh My God, does that mean Mom’s going to change her will and put him in or vice versa,” says Sharma. She often counsels people who believe a parent changed the will under duress.

The legalities have nothing to do with Michael and his fiancée Teresa’s decision to wed. On the other hand, age is definitely a factor. “Everybody has their age in the sand where they start to feel ‘Oops, I am not a kid anymore. I am getting older.’ For me, it was turning 60,” he says. “I started to take it more seriously.”

And he isn’t worried in the slightest about precipitating a change in the relationship. “I think it’ll change for the better. The marriage is just another step of making it more solid and more secure for the future.” This is a bit astonishing coming from a man who took a long time to get over his own divorce and has handled hundreds of others as a lawyer.

It is quite delightful to witness such a full romantic flush in a couple that has been together so long. They are also excited about the process of getting married, and they are all over the party aspect of it—especially Michael. He recently finished a huge case and so has had the time to handle many of the wedding planning details. Teresa likes to tell friends that he is making “a good bride.”

They are even planning to take each other’s names, creating a new double-barrelled moniker. “I do feel that I am headed into a new chapter of my life,” says Michael, “and I’m very excited that it will be a married chapter with a special person.”