States of the Union: Unconventional Ways to Keep Your Relationship Strong 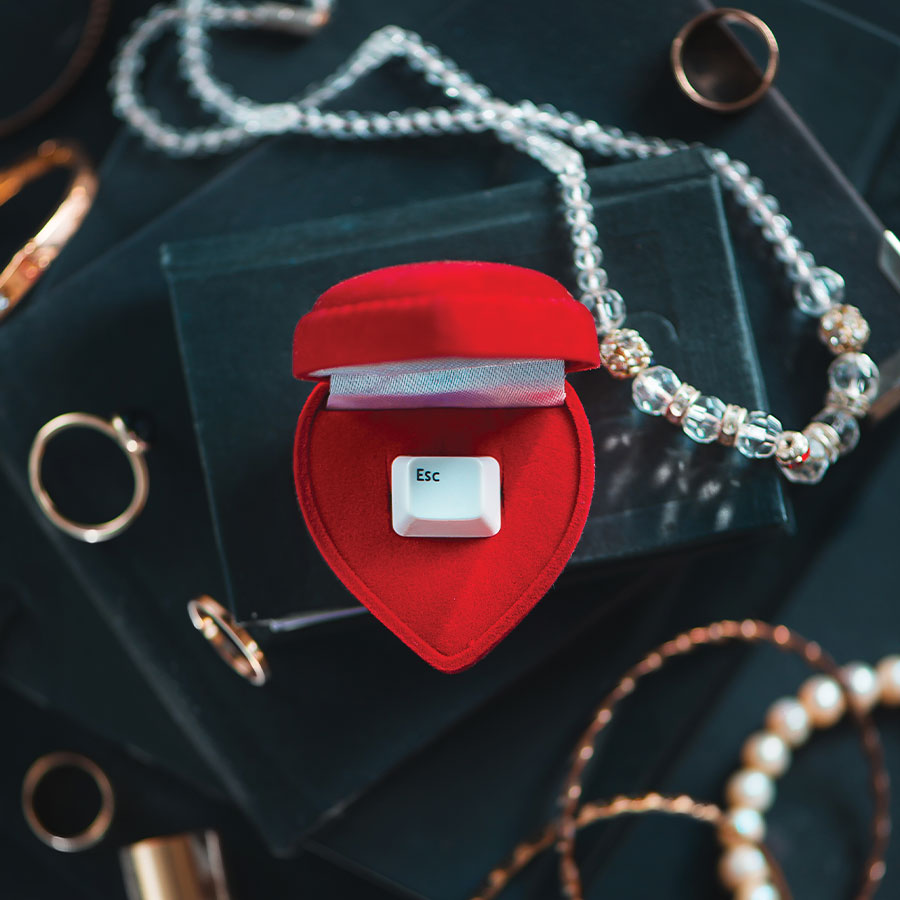 When all-too-common curveballs slam into a long-term marriage, many people blame their partners — or themselves. But some couples find a different way: Instead of trying to change each other, they change the terms of their marriage. Photo: Dina Belenko Photography/Getty Images

When a marriage flags, don’t just push the escape button. Some partnerships may survive and thrive if couples agree on unconventional arrangements.

Want your marriage to stay strong? The script goes something like this: Spend lots of time together, keep talking, keep touching, and all will be well.

The scriptwriters don’t tell us that our appetite for sexual variety may drive us to distraction. Or that we may lose our taste for sex altogether, even if we still find our spouse hot. Or maybe our partner continues to enchant us in the bedroom, but gets on our nerves in the living room. Or we simply can’t endure yet another weekend of antiquing.

When these all-too-common curveballs slam into a long-term marriage, many people blame their partners — or themselves. But some couples find a different way: Instead of trying to change each other, they change the terms of their marriage.

This fluidity hasn’t always been an option. As recently as 50 years ago, “couples prioritized stability over fulfillment, because their survival – especially the woman’s — depended on it,” says Leah Carey, a sex and intimacy coach based in Oregon. “Leaving a marriage was a huge risk if you couldn’t support yourself, so women took pains to avoid introducing instability into their marriages,” she says. When both partners can support themselves separately, “it becomes possible to explore activities that lead to greater fulfillment for both, rather than preserving the status quo for the sake of survival.” According to Carey, “it’s no coincidence that the rise of ‘swinging’ tracks closely with women’s right to have bank accounts and credit cards in their own names.”

The idea of loosening the ties that bind evidently resonates with many long-standing couples. In the online communities I visited to solicit interviews, members responded with intense curiosity. The vibe was, “we need to talk about this.” For all that, it was difficult to find people willing to discuss their own off-script marriages. Of those who generously agreed to do it, all but one insisted on a pseudonym. This striking polarity — the curiosity and the reticence — speaks to the power of lingering myths about what marriage should and shouldn’t be.

It stands to reason that same-sex couples, who don’t bring the same marriage template to the altar, would have an easier time escaping this trap. In fact, the 2012 U.S. National Survey of Sexual Health and Behavior found more LGBTQ couples reporting open relationships than their heterosexual counterparts. (Similar Canadian data are not available.) But Dianne Gilmour, a Vancouver relationship therapist, has “not found any marked differences in how LGBTQ couples navigate the decision to embark in non-traditional relationships” – perhaps because “many have waited a long time before gaining the right to legalize and legitimize their unions.” It seems that the cultural baggage around marriage weaves its way into same-sex unions as well.

Erica, a 55-year-old Toronto teacher, ran into this conundrum after three decades of marriage, when she became intensely curious about connecting physically with other men.  At this point, she might have asked her husband for a separation, but she loved him as much as ever. “I didn’t want our marriage to end because it couldn’t weather some curiosity,” is how she puts it. When she took the idea to her husband, he initially felt hurt at the idea that he “wasn’t enough,” although he listened respectfully when she broached the topic again. And as they kept talking, he became interested, too.

Since then, Erica and her husband have both found partners who share their curiosity, although they also continue to have sex with each other — with condoms, STI testing and COVID-19 precautions (like avoiding all contact with their “others” during lockdown). While they don’t ask each other for full accounts of their “weekends away,” they do share some deets, often playfully. “If he’s been with his partner and they tried a new restaurant, he might tell me I would have loved the menu,” says Erica. While she concedes their arrangement carries the risk of forming emotional attachments, the opportunity for growth has made the gamble more than worthwhile. “What makes our marriage vital is the willingness to talk about anything, no matter
how uncomfortable.”

Dr. Cheryl Fraser, a registered psychologist and sex therapist on Vancouver Island, has “no ethical or philosophical problem with open marriages,” although she encourages couples to do some work before taking this step. Through focused exercises, “I teach people how to find each other interesting again,” she says. “I have clients who are rediscovering each other sexually in their 70s, after three decades of nothing.” For couples with fundamental sexual differences, though, “consensual non-monogamy can work for a small proportion, as long as you establish crystal-clear boundaries.”

It’s not perfect, but neither is divorce.

If society still squirms at such arrangements, it also frowns on couples who stay together when desire has flamed out. We pull out the pop-psych catchphrases: Follow your bliss, don’t settle, the kids will be happier if they see you happy. But marriage is deeper and wider than any cliché thrown at it, and some couples find a new kind of freedom when they put sex behind them. “It is absolutely okay to take sex off the table if both people are satisfied,” says Carey. “There’s no one-size-fits-all.”

More commonly, the sexual flame goes out for only one partner. Even then, a marriage can thrive as long as both parties share a passion for staying together. Such was the case with Colette, 57, who works for a content marketing agency in southwestern Ontario. About 12 years ago, two decades into her marriage, her husband admitted he had lost interest in having a sexual relationship with her. While it stung, Colette “didn’t let it crush my self-esteem. It was about him, not me.”

Colette and her husband decided to stay together, in part because of their then-preteen boys, but also because “we still loved being together. We still talked, laughed and had a great time.” They agreed to meet their sexual needs elsewhere, and the boys would never need to know. As it turned out, this arrangement lasted about 10 years. (They eventually separated after their children were grown.) “Our agreement took the sexual pressure off, so we were able to maintain a generally happy family life,” says Colette. “I don’t regret our decision for a minute.”

You Can Do That?

It’s the monotony outside the bedroom that wears them down. Rather than grit their teeth and endure, some of them opt to live separately, knocking down another sacred cow of marriage: making a home together.

Known as “living apart together” (LAT), this option has been gaining ground in Canada. According to Statistics Canada, the proportion of Canadian couples between the ages of 25 and 64 in LAT relationships increased from six to nine per cent over 11 years ending in 2017. While some arrangements spring from life circumstances, such as jobs in different locations, the LAT lifestyle represents a deliberate choice for many couples – unlike, say, the decision to live apart that helped same-sex couples in earlier generations evade some of society’s judgment.

Today, LAT couples can swap stories in a private Facebook group called Apartners, founded in 2015 by Montreal filmmaker Sharon Hyman, who has been in a LAT marriage since 1999 and is making a documentary about it. The Facebook group currently boasts more than 3,000 members.

For Carol Perehudoff (who agreed to use her real name), LAT proved a natural fit. Now 60, the Toronto travel blogger got married eight years ago to a facilities management director. “For us, it seemed so normal to keep living apart, we never even talked about it,” she says, adding that marrying later in life may have facilitated this choice. “I had been independent for decades when I got married and saw no reason to give that up.”

She lives in her new downtown condo, her husband lives with his son, and they spend weekends and a couple of weeknights together. “It just works,” she says. “It’s like we’re perpetually dating, but committed. It’s been that way since our first date.”

Perehudoff enjoys showing people that marriage need not follow a template. “I was at a travel event, describing my marriage arrangement, and someone asked me, ‘You can do that?’ It’s like people are waiting for permission.”

Over the years, their disparate passions exerted a subtle strain on their union, so they hashed out a deal: When she goes off on a long trip, he has permission to explore this interest – but only with professionals, to keep feelings out of the equation. “Our marriage is as strong as ever,” he says.

Imagine if we could talk openly about such arrangements: “Vijay’s at a leather party tonight, so we’re not available for dinner.” But society hasn’t caught up with these marriage styles. Tongues continue to cluck, fingers to wag.

Such tinges of disapproval followed Erica after she and her husband opened their marriage. “We’ve discovered that our friends are very conventional,” she says. “We don’t want to endanger our friendships, so we’ve learned to keep this to ourselves.” After a pause, she adds: “But I think it’s sad.”

Carey, the Oregon sex coach, urges off-script couples to cast societal judgment aside and trust their own. “Whatever is right for you, your relationship style, your nervous system, is okay,” she says. In her own relationship, competing needs for variety and security brought forth a unique agreement: “We can have sex with other people, as long as our partner is in the room. We’ve only gone there a couple of times, so far.”

To couples who want to go the distance, Perel’s Mating in Captivity offers this consideration: “If we’re planning to spend 50 years with one soul – and we want a happy jubilee – it may be wiser to review our contract at various junctures … and perhaps even to create a new ‘art of loving’ for the 21st century couple.”

A version this article appeared in the February/March 2022 issue with the headline “States of the Union,” p. 78.

Love in Lockdown: Stories From the Lucky and Unlucky in Love

Tea for Two: ‘The Garden That Love Built’ and Other Romantic Spots in Victoria, B.C.