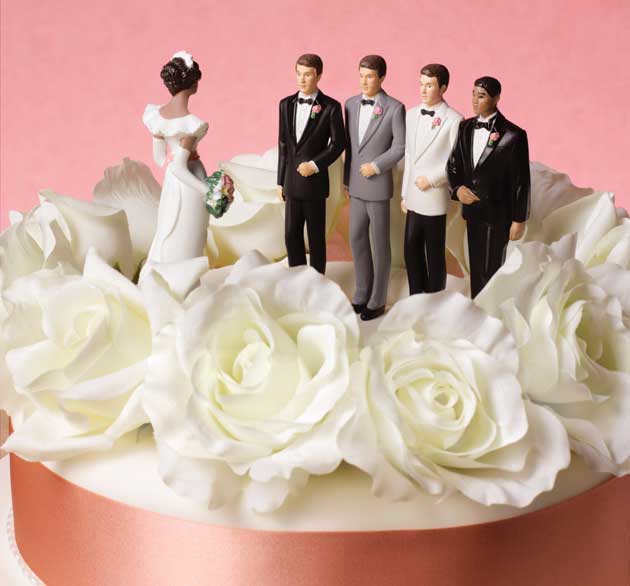 Getting older means having the time to get hitched three or more times. Kim Izzo heads to the altar with marriage’s repeat customers.

When I became engaged for the second time at the age of 44, I was thrilled. It had been 15 years since my first engagement and marriage – a whirlwind courtship that resulted in a California beach wedding five months later. But now, 18 months after the current proposal, when people ask, “When is the wedding?” I still don’t have an answer.

Confession: I’m wondering if marriage really is the next step for me. Perhaps it was the rapid-fire first marriage that ended after two years – classic starter, no kids – that makes me question if having a betrothed isn’t enough romance for one woman. As for my other half, the man who popped the question, I’m his third fiancée, and after two divorces – the second acrimonious and costly – he’s very fine to do whatever I wish. Happy to be married, equally happy to be, as he puts it, “Kurt and Goldie forever.”

Yet for countless others, many over the age of 45, getting hitched for the second, third or umpteenth time isn’t an existential crisis. Take the late Elizabeth Taylor, who said, “I do” eight times. The same number that’s in the title of the film that nabbed her her first Oscar, Butterfield 8, where she played a woman who has an illicit affair with a married man. I’m sure it’s a coincidence. Of course, she wasn’t the only one to favour eight: Mickey Rooney had as many wives. But show business is fickle, so it stands to reason that Hollywood stars would choose to change spouses as often as movie roles. But in the real world, why would someone want to marry again and again?

Suzan Vernon, 72, lives in East Sussex, England, and, in 2011, was happily married for the third time to her husband, Douglas, who is 82. “The first marriage ended in divorce, the second time my husband died so I became a widow, and now, this third time will end in somebody dying, I’m sure,” she chuckles. For her, marriage brings her companionship and a more active social life. She found being a widow a challenge in that her friends began to exclude her from events because she was a single woman.

Initially she lived with Douglas, who was also a widower, but the common-law lifestyle didn’t sit well with the two or the moral values of their generation. “At 70, to be living without being married, I felt uncomfortable. It’s not the same if you’re 18 and experimenting. If you don’t know what you’re doing when you’re 70, you never will,” she explains. She also points out that what she wanted as a young bride is different than what she wants now. “Marriage is bonding, that idea we are going to be together come what may. It’s never perfect, and as long as you don’t expect it to be perfect, you’re okay. First time, you have no idea what you want in another person.”

However, Vernon admitted that getting hitched at 71 for the third time did cause some initial concern from her children, who wanted to ensure he was the right man. But in the end, they were supportive. “They said, ‘Go for it, if it makes you feel right.’ It makes my life happier than if I was on my own and that was the important thing for them.”

Bill Harris*, 75, a retired telecom executive, has been married five times, having first walked down the aisle at the tender age of 19, then again at 24, 40, 50 and, 10 years ago, at age 65. He admits that when he announced his intent to marry for the fifth time, his children did look at him askance. “I was a hopeless romantic, enjoying falling in love more than being in love and I guess I don’t think of myself as a flake, but from the outside, it looks like a pretty flaky lifestyle. I don’t feel that way – it’s just the way my life evolved and where things went.” But subsequently, his new wife, Mary Ann, has become an intricate part of their lives and, as the saying goes, all is well that ends well. “This fifth one is going very strong and, hopefully, will be it,” he adds wryly.

For sure, five marriages isn’t any record, not in comparison to Hollywood standards, but still, why the desire to be a serial husband, I ask politely. “The basic answer is it seemed to be what I wanted in the next step in the relationship. Marriage as an institution never really fixed in my mind. It was simply the next step; courtship, engagement, marriage and divorce.” And it’s that last stage that has given marriage a bad name. Harris says he can understand the bad divorce stigma and explains that most of that stems from financial settlements. He was fortunate in that all but one of his divorces were equitable and amicable at the same time.

By comparison, Sir Paul McCartney has been down the long and winding marriage road a mild three times, most recently to mega-wealthy American heiress Nancy Shevell, then 51, in October 2011. His first marriage to Linda Eastman ended sadly when she passed away from breast cancer in 1998. His second, to the much maligned Heather Mills, began with an extravagant ceremony and reception at a castle and ended with an equally extravagant payout to her in divorce court. Yet, that didn’t deter the former Beatle, though it should be pointed out, maybe out of hope for similarly wedded bliss, he chose to marry Shevell in the same low-key fashion at the very same low-key courthouse in Marylebone where he married Linda.

My first wedding was also a low-key affair, two friends as witnesses, an ivory bias-cut gown and miles of beach. I admit to desiring a similar experience should my fiancé and I take the plunge. After all, California is breathtaking, and you can’t beat its user-friendly divorce laws. Though I’m not sure about a gown because I’m not convinced that a second marriage need be as solemn and formal. I admired Shevell’s choice of dress, an ivory number that hit just above her knees and was designed by Sir Paul’s daughter-as-fashion-brand, Stella McCartney. A single flower in the bride’s hair and a small bouquet in her hands, and she was fit to tie the knot. Though if I change my mind – not that brides ever do that – and decide on a glitzy do, I wouldn’t be alone.

“Typically, the second wedding looks nothing like the first. Everyone’s definition of what they want changes with experience,” says Alison McGill, editor-in-chief of Weddingbells. “The idea that the second-time bride is wearing a suit to city hall has gone out the window. Society and its rules that traditionally dictated weddings are a lot more relaxed, and we’ve lightened up. And also people are younger longer, and their mindset is more youthful.”

As for the dress, McGill says that the old rules that a bride can’t wear white don’t apply. “It’s anything you want dress-wise. Sure, there’s age-appropriateness to be considered, but there is no reason you can’t wear white. It may not be a strapless princess, but if you can own it and rock it, you can do it.”

When it comes to repeat customers of a certain age, the event itself, like the fashion, anything goes. But what wedding industry professionals are seeing, “anything” seems to trend towards elegant sophistication with few bridezilla moments. “They know what they want,” says Cindy Johnson, the founder and lead wedding designer of Platinum Events Group, who also teaches event management at Georgian College and York University. “They may not know what’s available but they have their style figured out.”

Johnson says that her older clients, some going into their second, third or even fourth marriage, are skipping banquet halls and ballrooms and instead are leaning toward smaller, intimate dining events in less traditional wedding-style venues. “They just really want to have a good time and not focus on a princess-style wedding,” Johnson explains. “Again, it’s a more mature crowd. They aren’t looking to pull an all-night drinking binge. After dinner, they have cocktails, then head home.”

She also points out that because many of these couples have children, even adult children, and are often blending families, the wedding takes on a warmer, inclusive vibe. “When there are kids involved, there is more of an emphasis on the family unit. It’s more a celebration of life, making their children come together. It’s very important to the couple.”

Vernon chose the intimate route, getting married in a registry office, with her family and two other couples in attendance, wearing a red jacket and a small flower in her hair. The couple had their reception at a five-star hotel with champagne and a wedding breakfast on the balcony overlooking the hall. Harris, on the other hand, says his fifth wedding proved to be the biggest event of all of them, an elaborate black-tie formal affair for 150 guests. The couple’s children were in the bridal party and wore white tie. “It seems funny that the last one should be the biggest, but it was sort of like ‘What the hell, let’s go for it.’ But I’m very happy with it and still watch the video,” he confesses. “I thought as I got older, I was drifting out of it, as I’m much more practical but am still romantic.”

I asked Johnson what she enjoyed about planning for the mature bride and groom, and she didn’t hesitate: “I find second-time-arounders are very much focused on the relationship, not just each other but the family unit.”

And while I’m no closer to making a decision on marrying again, one thing is certain: I no longer agree with Woody Allen that marriage is the death of hope. It would seem that marriage is for the eternally hopeful. *Name has been changed