Behind The Cover: July/August, The Roots Founders 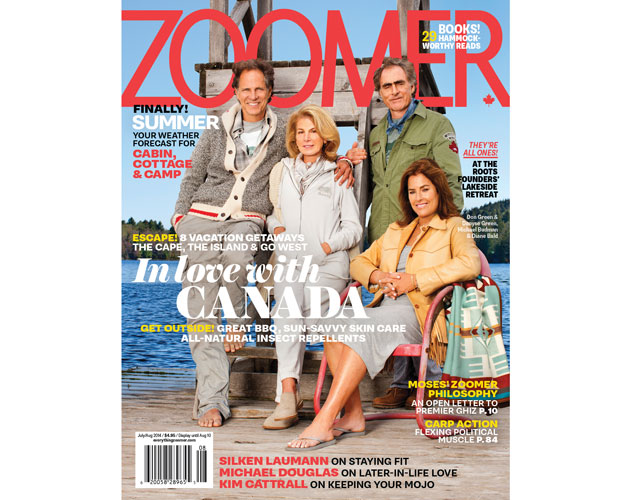 The early morning drive into pristine Algonquin Park was marred by ominous dark clouds and sheets of rain.

It was obvious the weather gods were not playing nice on this scheduled day for our cover shoot and multipage spread in our summer issue celebrating the founders of Roots, one of Canada’s iconic brands and its 40th anniversary.

Our caravan of three cars filled with equipment and editors, photographer, makeup artist and assistants silently groaned. As it is with any photo shoot, truly the most powerful on set are not the subjects or those large-and-in-charge decision-makers but the weather gods, who really do make or break the most meticulously planned photo shoot.

This cover shoot had to be done in two days for two reasons. First, this was the only time the subjects’ schedules allowed them to all get together in one place. And second, we had a looming deadline where we went to press in two weeks.

But we drove on to Bonita, Michael and Diane Budman’s lodge, which acted as base camp for us and also as the site of the cover shoot. Proceeding with hair and makeup and grooming, unpacking the 19 boxes of Roots apparel shipped up for the shoot, everyone carried on with their specific duties, fingers crossed, that there would be a break in the clouds – even if it was just for few minutes – to give us a shot on their dock with the crystal-clear lake, sharp evergreen trees in the distance and just enough blue sky to make it look like one of those marvellous Canadian summer days.

The one person with copious amount of faith was our photographer, Chris Chapman, who, convinced the weather would change, set up his lights and equipment on the dock and literally watched and waited for a massive dark cloud to move out of the way. And it did. Positioning the foursome into place, he quickly snapped away.

But perhaps the most spectacular thing about our location occurred later in the afternoon as we photographed Michael Budman and Don Green, the childhood friends, sitting on the dock at the original cottage, where they conceived the idea of starting a company based on the rugged outdoor beauty of Canada. Budman said something that truly summed up the beauty of this locale.

“The beauty of Algonquin Park is it never changes. This place looks exactly like it did when we came here for camp as teenagers.”

In today’s hyper-fast digital world of constant change and the super-human effort it requires to keep up, it’s refreshing to know, at least here in Canada, there is one place that remains virtually unchanged and untouched by the passage of time.