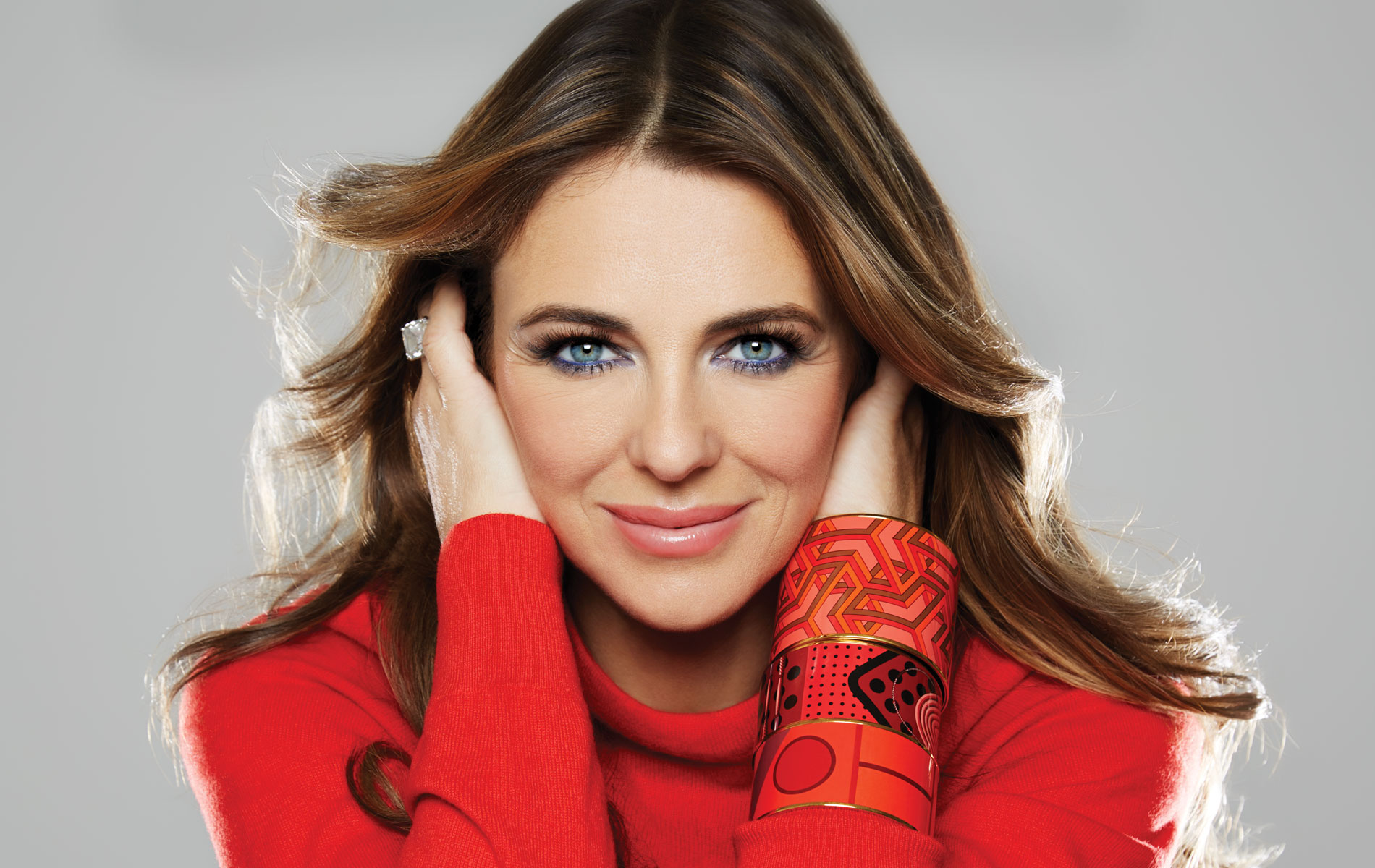 With a nod and a wink at her glamourous image, Elizabeth Hurley is pretty in pink as she carries on with her life’s mission – breast cancer awareness

We are used to seeing this woman in so many guises. As a glorious vamp in a Versace gown, barely contained by gold safety pins, on then-boyfriend Hugh Grant’s arm. As a demure bride in a pink-and-gold wedding sari in the pages of Hello magazine. As the fictional Queen of England in the new television show The Royals, all smiling menace and softly draped furs.

So who is this creature, then, wearing a white bathrobe you’d find on the back of the door in any hotel room? Never mind that she’s also got a plate of chocolate cake in one hand. “Don’t mind the bathrobe,” says Elizabeth Hurley with a smile at once arch and conspiratorial. “I greet everyone this way.”
I somehow doubt that. A woman with this many plates in the air has little time for lounging on the sofa, bare feet tucked under her, forking chocolate cake into impressively glossed lips. But that is precisely what she’s doing on this afternoon in Toronto, taking a brief break from a tornado schedule of appearances on behalf of Estée Lauder’s Breast Cancer Awareness campaign. She has been its celebrity ambassador for 20 years now, meeting survivors and their loved ones, giving pep talks to Estée Lauder employees, smiling for endless photos in a succession of snug dresses, one foot placed just so in front of the other.

She is a particular sort of chameleon, this Liz Hurley, changing her careers to suit the changing times, while maintaining a kind of glamour impervious to fashion: smoky-shaded blue eyes, needle-heeled stilettos, glossy waves of dark hair. She is a Jilly Cooper heroine sprung to life, all long limbs and posh vowels and lust for life.

I mention Jilly Cooper because whatever other labels you might apply to Hurley – survivor, entrepreneur, celebrity girlfriend, permanent fixture in the tabloids she loathes – she is, above all, English. She embodies the cherished trait central to that most English expression “mustn’t grumble.” She does not wallow. There is pluck at her core.

When I ask her, for example, how hard it is to conduct a relationship when you’re famous, she shrugs. That shrug encompasses Hugh Grant, Australian cricket star Shane Warne, ex-husband Arun Nayar and Steve Bing.

“It’s very hard having new relationships when you’re in the public eye because, you know, things are new,” Hurley says, curled up on the couch in the photo studio. “The last thing you need are outsiders putting in their opinion. That’s one of the costs of doing business, but there are a lot of upsides of the business, too. So it’s a First  World problem. I understand that my problems are First World problems.”

She laughs and arches one perfectly groomed dark brow, as if to say, “Isn’t it silly, all this talk of men? Men who have been kicked to the curb, while I’m still here, doing interesting things?” And it is true: anyone who tweets in the voice of her parrot has more amusing things to talk about than old boyfriends (you can follow her slightly surly parrot @Pingponghurley on Twitter, if you’re curious, although she also tweets under her own name). For many of her 49 years, this army major’s daughter from Basingstoke, England, has been reinventing herself with the ingenuity of a nine-lived cat. In the 18 years since she popped on screen in a catsuit in Austin Powers: Man of Mystery, she’s also been a movie producer, an organic grocery impresario, a swimwear designer, a model, a television presenter and a campaigner for breast-cancer awareness.

While Hurley may not be known for her versatility as an actress, she is adept at a certain femme fatale. It’s a quality she brings to her latest role as the Queen of England in The Royals, the first scripted drama from the E! Channel. Hurley plays Queen Helena, mother of the country and two very naughty children. “I’m not a nice queen,” she says, with a treacly dark laugh, pointing to a copy of Zoomer magazine lying nearby with the real monarch’s portrait on it. “It has nothing to do with Queen Elizabeth II.”

The Jilly Cooper side of her is perfect for this role because The Royals is entertainingly bonkers or, as the Brits like to say, as camp as a row of tents. Before an episode ever aired, it had been renewed for a second season. Creator Mark Schwahn had Hurley in mind from the moment he started writing the scripts. “She has such an interesting combination of qualities,” he says over the phone from Los Angeles. “I don’t think people know that she has impeccable comic timing and a great sense of humour.”

But more than that, what impressed him was her willingness to play a queen bitch: “Being villainous is incredibly interesting,” Schwahn says. “The audience loves wickedness because that’s not how we conduct ourselves in our daily lives. She really understood that.” At one point, Hurley told him she thought that Queen Helena should wear fur “because she should have a bit of cruelty showing.”

Sitting in her cruelty-free bathrobe, Hurley nods. “There’s a real Cruella de Vil side to this queen.” I am tempted to turn over the Zoomer magazine so that the real Queen isn’t exposed to this kind of blasphemy. At that minute, Hurley’s phone rings, and she picks it up, beaming.

“Hello, old man,” she says. “How are you, cub?” Ah, so there is a man in her life after all. It’s her 12-year-old son, Damian, calling from England, where he’s on a break from his boarding school. They have an animated chat about her day – “I was just at a store called the Bay. It’s like Canada’s Selfridges” – and she promises to call him back in a half hour. For the next 20 minutes, he sends her texts filled with emojis of hearts and bears.

It was for Damian’s sake that she assumed her most unexpected role: gentlewoman farmer. In 2003, Hurley bought an estate in the Cotswolds region of England, a verdant rural patch famous for hosting wealthy exiles from London. If Hurley hadn’t grown tired of London, she had certainly grown tired of its relentless paparazzi. Hugh Grant became famous for taking on the tabloids during the U.K.’s recent phone-hacking scandals, but his ex-girlfriend was just as ferocious (if quieter) about intrusions to her privacy.

“Our press is famous for being vicious,” she says. She and Grant made a point of suing tabloids when they felt they’d been defamed “and we stopped getting libelled. It pays to make a stand and protect yourself against unpleasant lies, slurs and innuendo.”

The breaking point came when Damian became afraid of the photo-graphers lurking on the sidewalk near their house. He once took an umbrella out of a stand before they left the house, though there wasn’t a cloud in the sky. His mother asked why he needed an umbrella. “Mummy,” he said, “I’m going to hit those men outside.”

They packed up and moved to the Cotswolds, to a 450-acre manor containing less vicious creatures than London’s streets. There, Hurley’s reinvention continued: a woman famous for her stilettos and frocks became famous for her pork and pies instead. “Elizabeth Hurley” sausages were sold in Harrods and, in 2009, she announced a partnership with Prince Charles to sell “modern, healthy, organic food” produced on her farm and sold under his Duchy Originals label. (If Prince Charles has seen The Royals, he certainly isn’t saying.)

Another text arrives from Damian, and Hurley glances down at it and smiles. The emojis show a dark-haired girl (that’s her) kissing a baby (that would be him.) It occurs to me that this might be the most emotionally accessible 12-year-old boy on the planet, and perhaps he should be cloned.

Their years in the British countryside were interrupted by her ill-fated turn as host of the British reality show Project Catwalk (“wooden” was the kindest adjective used) and a more successful turn as the head of a beach-fashion company (she still models its goods).

For eight years, she and Damian lived in the country, largely away from movie cameras. “I was a single parent and I wanted to be with him. It’s not something I regret for a heartbeat. I had no idea if I’d be able to work again but, in fact, I’ve been unbelievably lucky.” She left the film industry, as she says, when she was still a sexy young thing: how would the industry, so notoriously unkind to women who dare to age, treat her when she came back?
Pretty well, as it turned out. She was offered the role of Diana Payne, a scheming business tycoon, in the fifth season of Gossip Girl. From there, she landed the role of Queen Helena on The Royals, which has given her not just a fresh start but a glorious role model in the art of longevity: Joan Collins, who plays Hurley’s mother, the Grand Duchess of Oxford (the title is as elaborate and fictitious as one of Dame Joan’s wigs).

The two women bonded immediately, which is exactly what you’d hope would happen when two great survivors of the mascara-and-mustn’t-grumble school collide. “She’s 82 years old,” Hurley says with admiration, “and she has the joie de vivre of a 20-year-old. Yes, she looks fantastic, she’s always taken care of herself, but it’s her manner that’s the most inspirational – she’s so energetic and interested in everything. Wonderful woman.”

In between filming, raising her son and occasionally tweeting in her parrot’s voice, Hurley continues her work as a global ambassador for Estée Lauder’s international Breast Cancer Awareness campaign. Twenty years ago, when she had just begun modelling for the company, Evelyn Lauder – who had been diagnosed with breast cancer in 1989 – approached her with a simple plan: they would use the company’s influence to spread awareness about the disease, its impact on the lives of women and their loved ones.

It was both the best and worst time for Hurley: she had just lost her grandmother, Ena Ranger, to the disease. Ranger came from a generation that didn’t speak easily about body parts or intimate issues and didn’t tell anyone about the lump she’d discovered until it was too late for treatment. “She was exactly the kind of person that Evelyn was talking about when she said, ‘Women are scared. They don’t know what it is. They don’t know what the treatments are. They don’t know that it doesn’t have to be a death sentence.’”

Over the years, she’s met thousands of women who have breast cancer – as well as some men. Now, after this brief stop in Toronto, she’s off to New York to meet some more. She stands up in her white bathrobe, and I can’t help but notice she has somehow managed to drop not even one cake crumb on its pristine surface. She is escorted off by a twittering retinue, like Cinderella with all those birds in the old Disney film. A few moments later, she is back, ready for the red carpet in a tight blush-coloured dress and nude heels, her hair even glossier (if such a thing is possible). The chameleon at work once again.