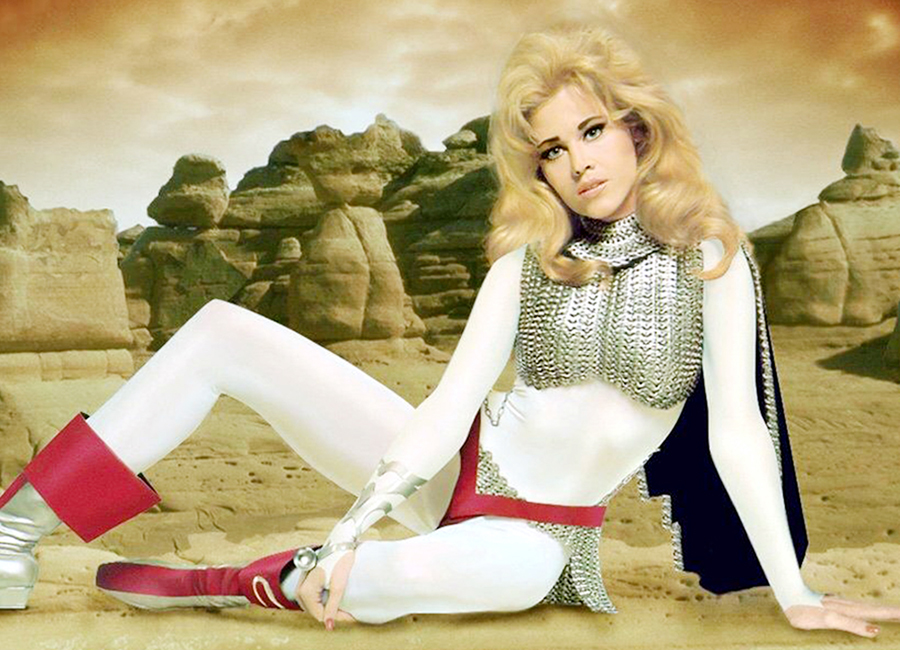 The legendary actress turned 80 on Dec. 21, and the newly-minted octogenarian is still at the top of her fashion game.

Jane Fonda is a hot commodity in Hollywood.

Her hit Netflix series, Grace and Frankie, has garnered her both Emmy and Screen Actors Guild nominations. She recently reunited for the fourth time with Robert Redford (the duo appeared in three movies together, including the tearjerker Barefoot in the Park) in the critically acclaimed Netflix film, Our Souls At Night. Her next film, Book Club—co–starring Diane Keaton and Mary Steenburgen—about a group of women whose lives changed after reading 50 Shades of Grey, hits theatres in 2018.

As anyone who remembers the acting scion as a young woman—who could forget Barbarella?—the two-time Oscar winner was just as active offscreen as a controversial ’60s activist with the infamous “Hanoi Jane” photo. Rounding out her resume is author of both memoirs and self-help tomes and, of course, her stint as a hugely-successful fitness guru.

Of course, we can’t ignore Fonda’s other starring role—fashion icon. This is a part she was born to play, and her red carpet choices are much like her movie roles—widely diverse and unpredictable, yet always hitting the right style note.

To celebrate her milestone birthday, we take a look back at some of her most recent fashion highlights.

Ahead of her 80th birthday, the actress started the celebrations early by raising more than $1.3 million for the Georgia Campaign For Adolescent Power & Potential—a charity she founded back in 1995 to help prevent teen pregnancy.

For the “Eight Decades of Jane” fundraising gala in Atlanta, she wore a purple pant suit, trimmed in velvet ribbon, from designer Elie Saab. Most women of a certain age would reach for that cocktail standby—le smoking in black—because the tuxedo look is a reliable classic. But Fonda’s royal hue pant suit makes the case for exploring other chic Crayola colours for cocktail attire. Is it a coincidence that Pantone’s colour of 2018 is ultra violet? We don’t think so…

When the actress does opt for the traditional black le smoking, she chooses one from the house that invented the look—Saint Laurent. Seen here at a Saint Laurent fashion show staged at The Hollywood Palladium back in February 2016, she went ultra glam with a bedazzled velvet tuxedo jacket.

If you’re of the mind set that a tuxedo jacket that sparkles is too trendy to invest, keep in mind if it is tailored and in a classic man-style cut—it will serve you for years.

At the Venice Film Festival in September 2017, Fonda left some of the vavavoom behind and went for a softer, but no less, glamorous red carpet gown to accept her Lifetime Achievement Award.

The dusty pale tulle gown by New York based label, Marchesa (clearly a choice made before the fall of Harvey Weinstein, whose wife designs for the label), with tufts of feathers, was by all accounts a showstopper and made her look like she was gliding along the red carpet.

Proof that the style icon is that rare celebrity who is not afraid to take fashion risks and consistently make unconventional and bold statements. All the more laudable because even at age 77—as seen here at the 2015 Grammy Awards—she not only marches to her own fashion beat but bends the rules to make them work for her.

Let us count the ways she does this with this singularly striking red carpet look. First, the emerald green outfit is by Balmain, the Paris based fashion label known for clothes which are relentlessly sexy and full-throttle glamorous. It’s a brand beloved and worn by all female members of the Kardashian clan and Rihanna. Hence, it was unexpected to see Fonda on the red carpet in this particular label.

Second, it’s a jumpsuit. That’s right, a one-piece outfit, cinched with a wide belt and accessorized with a waterfall of gold chains. How many septuagenarians do you know can rock a jumpsuit so effortlessly as if they are pyjamas?

At the 2017 Emmy Awards the actress channelled a flawlessly streamlined look on the red carpet, starting with her hair —a ponytail—once the sole domain of the teeny-bopper. The look sent social media into overdrive with a flurry of comments and debates about her hair extensions. Some questioned if it was too youthful. They were wrong.

Regardless which side of the debate you’re on, there’s no denying it was utterly dramatic especially paired with the shocking pink Brandon Maxwell gown.

When she dons a classic black evening gown, as seen here at the Costume Designers Guild Awards in Beverly Hills in 2017, she ensures there’s a certain amount of drama while remaining elegant and alluring.

The Versace gown features mid-length sleeves – a style feature often desired by older women—but the asymmetrical neckline shows off her perfect shoulder. The pale blue adds interest and keeps the gown from being too somber. A fitted bodice and the pleating also helps flatten the stomach area. And of course, a train always gives a woman a regal air.

Who says travelling can’t be chic? Fonda looks impossibly stylish as she arrives in Italy last August for the Venice Film Festival, as most of us would dragging a Louis Vuitton suitcase, but no matter.

How to look postcard perfect upon arrival at your destination? Choose black pants that looks like leggings—knit on one side for ease and comfort. Keep the top loose and baggy like she did. And a silk scarf—not the cashmere or wool one you cuddle while on the plane—always adds a stylish note upon arrival. Top it off with a hat and sunglasses to hide any signs of the ravages of modern air travel and basta!