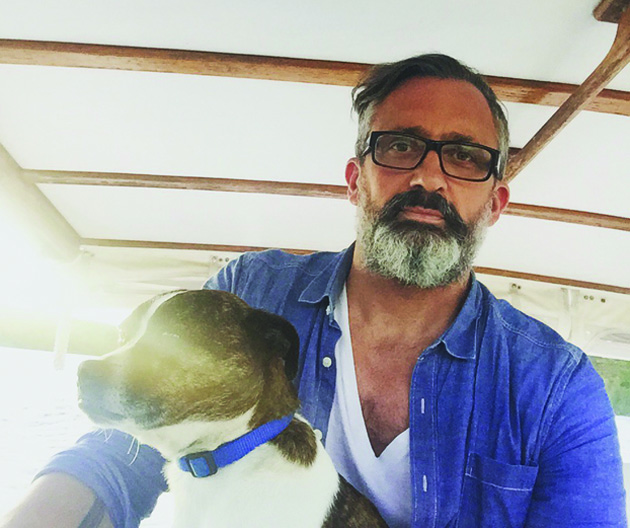 Here, how Jeremy Potvin found solace from his grief in founding the dog accessory e-commerce website, World of Angus.

“The death of my father seven years ago was a humbling influence on me,” says Jeremy Potvin when I ask him what the catalyst was for his second act, the dog accessory e-commerce site World of Angus. Potvin had been well-established in the fashion distribution business in Canada, then took a break. “And I was coming out of my own personal relationship, too.” Sunday nights were the hardest for Potvin, when his two children would return to their mother’s house for the week.

“But the kids were begging me for a dog, and that’s when I got Angus,” he explains. “Angus is a family name—my dad’s middle name.” Potvin credits Angus, a mixed bred, for changing his life for the better.

Angus helped Potvin to begin the healing process, mourning the loss of his dad and of his relationship. “Aside from my kids, suddenly I had a new purpose. I had Angus.” Angus sparked a new entrepreneurial spirit in Potvin—a self-taught techie, he used his IT knowledge to create World of Angus (worldofangus.com), a site that he describes as “products from the dog’s perspective.” Along with content featuring canine news and pop culture, the site is populated by core items—beds, blankets, coats and collars, plus a line of grooming products—elevated basics that those who are as passionate about their pups as Potvin will appreciate for the modern minimalist design esthetic.

The dog bed, for example, is a human mattress made from high-density memory foam, cut down to dog proportions. “Dogs want to be with their families,” he points out. “This way they have their own bed or a blanket that covers the couch that’s just like their owners’ but is their own.” A bed with a cover inscribed with cheeky sayings like “I woke up like this” or “Dog hair, Don’t care.” Potvin and his team are big advocates of animal welfare, so if your own Angus doesn’t like it, you don’t need to return it. “Donate it to the local animal shelter,” says Potvin. “We’ll send you a new one.”

Beyond the products, Potvin says he’s building World of Angus as an online community but that his dog helped him build networks offline as well. “Their world is home and walks to the dog park—these are their real things, and walks are Angus’ real life. He looks at me and says ‘Let’s go!'”

It’s a loneliness buster and good for empty nesters, too, he says. “It gets you out. And if people can connect with others…” Well, Angus, that’s the best influence of all.

A version of the article appeared in the October 2016 issue with the headline, “Man’s Best Friend,” p. 18.