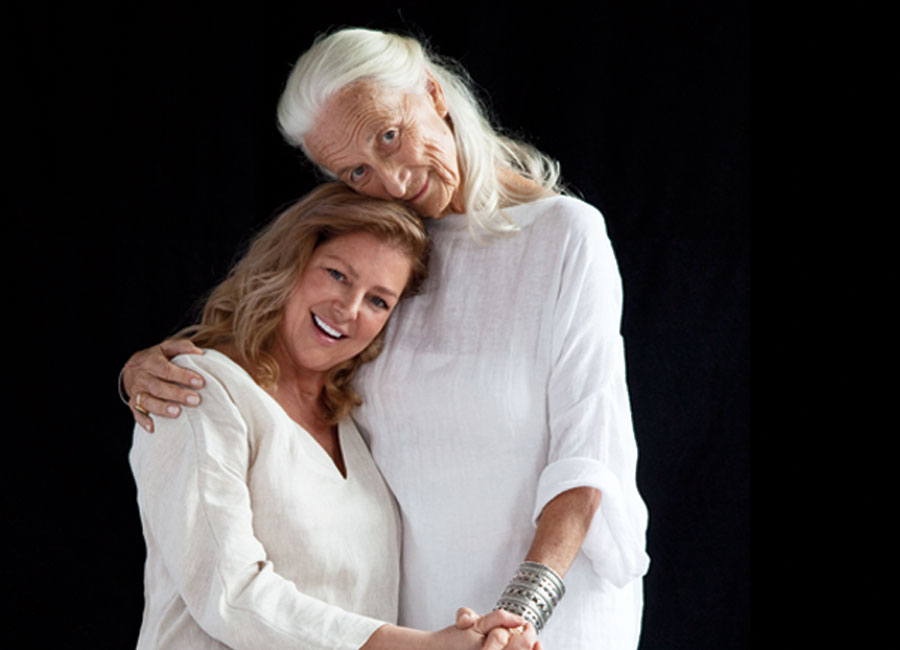 Meet the multi-generational design duo that created the Voyage collection, a linen fashion line that’s found its home in Canada.

Raised in war-torn Vilnius (then part of Poland, now Lithuania’s capital) during the Second World War, Krystyne Griffin fashioned outfits “out of scraps” for her doll. “I was a war child, so our clothing was nothing,” she says. “I made my own until I was 17 and I was able to buy clothes – and these were much nicer.”

Making up for lost time, Griffin, now 76, launched a fashion career as Eaton’s Paris-based haute couture buyer in the 1970s and was soon the go-to tastemaker for Canada’s finest retailers, selecting chic labels for Holt Renfrew’s Bloor Street flagship and lining the tony new Hazelton Lanes, which opened in 1976, with sophisto boutiques from Hermès to Courrèges. Swathed in elegance, statement jewelry and Samsara by Guerlain, a Best-Dressed list perennial admired as much for her regal bearing as her strikingly original style, Griffin almost single-handedly brought serious fashion to Toronto – panache that saw her appointed president of YSL Rive Gauche Canada.

Shifting her focus from fashion to jewelry, Griffin now designs a select array of custom pieces – hand-polished silver and gold, adorned with beads, coins and coral she sources from exotic bazaars on her travels. “Middle Eastern souks are best,” advises Griffin, who possesses the world’s largest private collection of black coral and has a particular fondness for Muslim prayer beads. Swiftly gaining cult status, her first limited-edition collection sold out at Bergdorf’s in Manhattan in 2000. Aloof to mass production, Griffin declined the luxe retailer’s request for a steady supply, opting instead to place select items in the boutique at Toronto’s Gardiner Museum.

“Over the years, I’ve been inspired by Yves Saint Laurent, by early Gabrielle Chanel and, of course, Diana Vreeland – for her look and her brilliant, witty mind. As I matured, my style became what suited my silhouette. I’m very tall and have no curves, so I preferred linear clothing, straight lines and often wore short skirts as the legs were okay.”

While Griffin says she didn’t inherit anything from her mother on the style front – except “character” – she has handed down wonderful clothing to her daughter. “Unique pieces that I wore in my Paris crazy days, and she now wears them in her Berlin crazy days! We’re the same height, but she has a better figure, so they look great on her. Younger women should have fun with their look, experiment and bring some fantasy to their image! An older woman can have fun, too, but clothes should not harness you. It’s important that they’re fluid and have mobility.”

It’s a point of view that synched perfectly with her 44-year-old goddaughter Whitney Westwood, whose eponymous brand, Whitney Linen, launched five years ago with a range of tabletop items and then fashion.

“When Whitney asked me to do this collection with her, I was surprised as I felt that this ‘life in fashion’ is past history for me. But I was challenged to do it, to see how she and her friends would react,” says Griffin, who recalls their previous fashion collaboration as gifting “little Whitney with Miss Dior nighties from Paris, which she would run around in all weekend wearing as a dress ….” at the age of five or six.

“I was a bit hesitant to ask Krystyne to do this with me as I knew her attention had shifted from fashion to jewelry and travel,” says Westwood. “But her answer was yes, right off the bat, and it was all fun from there. She wanted to keep it simple, easy and elegant, which was perfect for working in linen. Krystyne has such great taste and style. It’s always natural, never contrived.”

Collaborating on a 12-piece capsule collection centred on tunics, tops and kaftans (which she was also the face of, modelling the wardrobe for the lookbook), Griffin placed the emphasis on timeless garments that travelled well and named it Voyage.

“One should always travel in comfort and style. Even if you wear the same pieces over and over, accessories give the difference to your look,” says Griffin, who spends much of her time abroad these days – everywhere from Morocco to Mexico. “I love linen because it has a freshness to it and a bit of a crease, which you can domesticate when you wear it.”

“The Gap’s tagline for its linen line this year – ‘Wrinkles Encouraged!’ – was brilliant,” laughs Westwood, who appreciates the fabric’s classic yet casual elegance. “Voyage is for the woman who enjoys travel, who is independent, confident, free-spirited and effortlessly elegant.”
Just like its muse.

A version of this article appeared in the December/January 2018 issue with the headline, “Now Voyager,” p. 28.