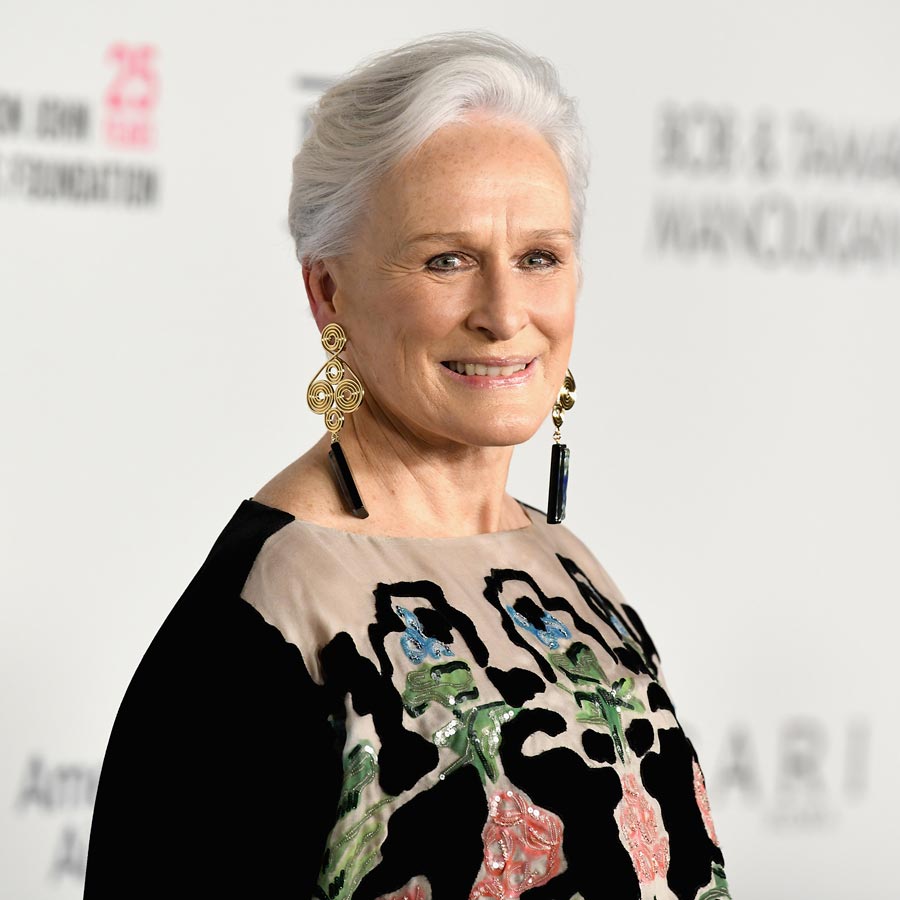 Perhaps there is no other signifier that instantly suggests – or is closely associated – with aging than grey hair. Hence the reason why some people still debate whether they should embrace their greying hair or delay grey at the roots by continuing to colour.

But there is a silver-lining to the grey hair dilemma.

While some of the obvious benefits of going naturally grey would be no more expensive colourist bills or harsh chemicals – one often over-looked factor would be the multitude of hair styles you can still wear. Embracing your grey hair does not necessarily mean you have limited options when it comes to styling.

Many women might opt to keep their grey hair short since it offers ease and less effort but even then, you can give a youthful vibe to your short grey hair. Going out at night for a big event is also an opportunity to explore other hair style options. Go for some edge and do something unexpected — and watch other heads turn. The actress has been sporting a short pixie-ish hair style for some years now – even before letting it go all gray. Her graceful neck and fine boned features (her parents are Hollywood legends Janet Leigh and Tony Curtis) are the perfect components to show off this sharp short cut. And judging from the many blogs – from Pinterest to Youtube videos – dedicated solely to her hairstyle, it’s safe to say, many fans are probably seeking ways to achieve this charmingly gamine look. New York fashion professionals, despite hectic lifestyles, always display immaculate, glossy hair. And this fashion executive who works at the New York luxury department store, Bergdorf Goodman, is a perfect example of how gray hair can have those same qualities. First, get an unfussy cut – her bob looks easy to maintain and style. Her striking silver hair always looks polished and has become her signature – along with an equally striking red lip. It’s no surprise she’s also a street style star, whose photo is constantly snapped during fashion weeks in New York and Europe. The award-winning actress has been sporting a short hair cut for many years but keeps it from looking dated. Her pixie style looks ultra-modern when it has a soft tousled look. It has an easy-to-maintain and wash-and-go feeling, which many women her age might appreciate. But keep in mind, you will need to use some hair products – such as a light gel or mousse – to give it some texture and lift. There might a tendency for some older women to sport a gray-haired style which gently frames their face – and also to possibly cover fine lines. But when you have a strong jawline and nose like this award-winning actress, it makes for a dramatic and modern look to sweep it all back away from your face. While she could have also slicked it down – which would have worked with her masculine tuxedo look but perhaps a touch too harsh looking – she opted to keep it feminine with soft gentle waves. This in-demand model (recently hired by CoverGirl and a past cover subject on Zoomer Magazine) is also a business woman, nutritionist and mother of Elon Musk, the self-made billionaire behind SpaceX and Tesla. She proudly shows there are no restrictions when it comes to styling gray hair. For an evening event in New York City, she sweeps her gray hair up into a pompadour hairstyle. The Love Story actress shows that you can opt for a simple but edgier look with your gray hair. By scraping her hair back completely away from her face, the revealing look shows every single line and wrinkle on her luminous face but she looks utterly modern and graceful. The key styling point to keep in mind when trying this look is not to slick the hair down on your scalp. Pulling it back gently and keeping it slightly raised helps soften the look. It’s also an opportunity to showcase oversize accessories for added dramatic effect. If you’ve ever seen the multi-Grammy Award winning country singer perform live, you will definitely believe gray is just another colour of hair and not have anything to do with age. She commands the stage with her guitar and dressed in jeans and white tank top – like any rock star – but her layered white hair glows like a halo.