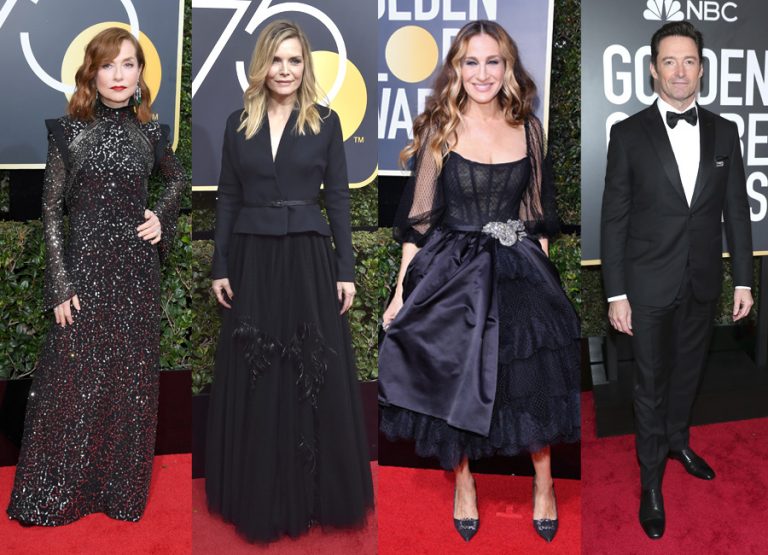 Ensuring that the all-black-attire at this year’s Golden Globes was not just a one-night sartorial stand, Conde Nast and eBay will be hosting a charity auction of some of the red carpet outfits worn that evening to benefit TIME’S UP Legal Defense Fund.

The black gowns worn by celebrities such as Meryl Streep, Nicole Kidman and Sarah Jessica Parker – and a few tuxedos worn by Hugh Jackman and Jude Law – will be available for bidding at eBay.com/timesup starting at 9am on Friday January 19th until January 26th. Since international shipping is available Canadians can also bid on any of these outfits.

The 2018 Golden Globes will go down in history as a historic moment where celebrities banded together and dressed in black to show support for survivors of sexual harassment and assault in the work place. All proceeds from the auction will benefit TIME’S UP Legal Defense Fund, which was set up to provide legal aid to those facing workplace sexual harassment.

“We’re thrilled that actors and others in the entertainment industry are leading in this extraordinary way to end the scourge of workplace sexual harassment,” said Fatima Goss Graves, President and CEO of the National Women’s Law Center, which is administering the TIME’S UP Legal Defense Fund.

The outfits were donated by various designers, including Gucci, Dior, Chanel and Armani. Red carpet events like the Golden Globes provide a magnitude of publicity worldwide for a design house, hence, celebrities and their stylists will often work with designers on an outfit for the big night. Most likely, the gown is one-of-a-kind since it was designed with a particular actress in mind and in her size. But after the big event, the gowns, jewellery and even the shoes are all returned to the design house.

While these gowns might be black, they are far from boring. So expect a frenzied bidding which might catapult their value into the stratosphere and beyond the reach of the average eBay user. Taking this into consideration, eBay has set aside three of the dresses and is offering a raffle, whereby you can make a $25 donation and a chance to win one.

Here are some of the red carpet outfits up for bids.