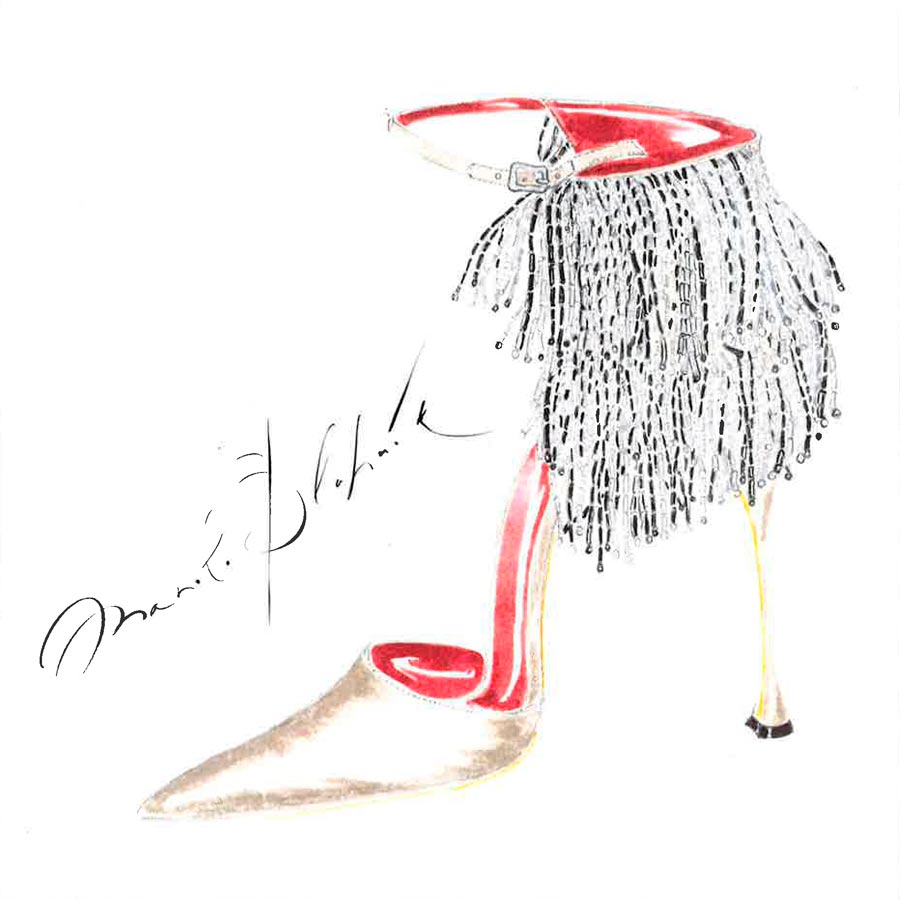 To glean an understanding of why women are obsessed with shoes, one only needs to look at the work of Manolo Blahnik. His footwear are practically works of art, with their sculptural shapes, explosion of colours and fanciful delicate details, all miraculously perched on the most elegant of stiletto heels. Beyond their covetable, objet-like beauty, they can elicit a compounding range of emotions in the wearer — power, femininity, elegance, glamour and sensuality. His fan base is wildly varied and includes princesses — both of the royal (Princesses Diana) and the pop star (Rihanna) variety. His shoes can evoke complete devotion — Vogue editor, Anna Wintour, only wears Blahniks.

Blahnik’s designs have achieved both historic and pop cultural touchstones in fashion. Bianca Jagger famously wore his shoes while astride a horse as she entered Studio 54. And Carrie Bradshaw’s obsession with Manolo Blahnik’s in Sex and the City catapulted the brand into the mainstream. A singular design of his also marked a shift in the fashion dialogue. Back in 2002, he took the camel coloured Timberland boot — beloved by hip hop and R&B artists — but styled it with his signature stiletto heel and pointed toe.

When Jennifer Lopez in her Jenny-from-the-Block faze strutted out wearing a pair, it heralded the turning point of when the luxury fashion world viewed the hip hop community as a serious source of inspiration and also marked the point when hip hop artists pivoted and went full throttle for unabashedly luxurious high fashion labels. Now it is only fitting that this revered king of footwear should have a retrospective of his work. A touring exhibit, Manolo Blahnik: The Art of Shoes, makes its only North American appearance — and final stop — at Toronto’s Bata Shoe Museum. The exhibit opened with a gala on the evening of May 15th, with the London-based designer in attendance. Spanning five decades of his career, the show includes some 200 shoes from his personal archives and 80 of his original sketches. It also features shoes from his first collection when he created the footwear for the Ossie Clark fashion show in London back in 1972 and also the macaron coloured confections he designed for the Sofia Coppola film, Marie Antoinette. The road leading up to his position as a world famous shoe designer was far from straight-forward. Born in the Canary Islands, his illustrious family wanted him to pursue a career in law. But after dropping out after his first semester studying at the University of Geneva, he turned to literature. But soon abandoned that for fashion illustrating. It was during a visit to New York and a meeting with the legendary Vogue editor, Diana Vreeland, upon seeing his illustrations, instructed him to design shoes. And women the world over, soon started to swoon for shoes.

Manolo Blahnik: The Art of Shoes exhibition runs until January 6th, 2019 at the Bata Shoe Museum.