To the Manor Born: Inside the Life & Designs of India Hicks 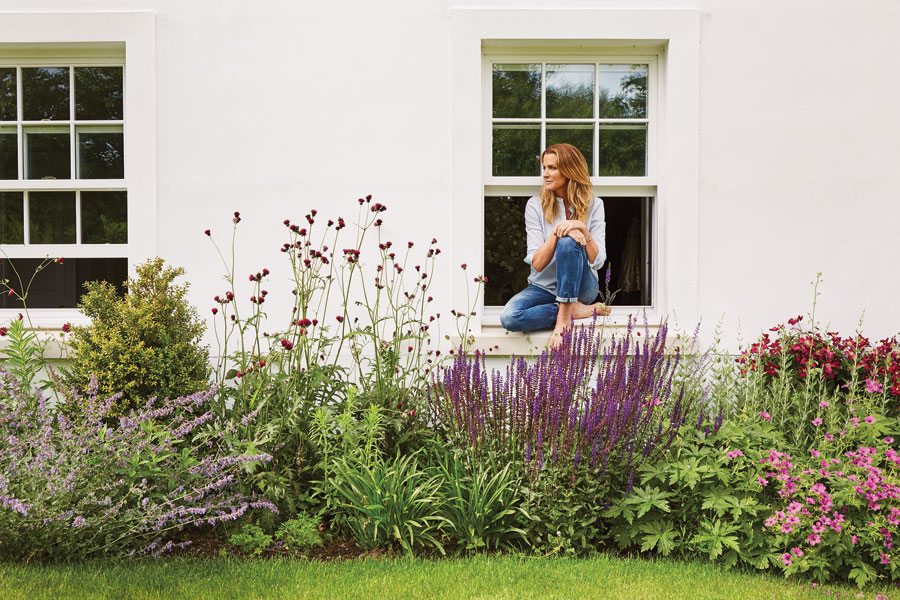 Sitting pretty on a windowsill at America Farm. Photos courtesy of India Hicks.

Inside the life and designs of quintessential Brit “It” girl-turned-entrepreneur India Hicks.

India Hicks hasn’t a clue who Drake is when he walks into One at Toronto’s Hazelton Hotel fully decked out with entourage. The shiny patio crowd is playing it cool, like hey no big deal. In fact, it is Hicks who is being mobbed. Her fans tend to be well-heeled middle-aged women who look a bit like her, and they are falling over themselves on the sidewalk to catch a minute with the bohemian blond.

“Is he a rapper?” Hicks asks, her head tilted, quizzical after she has obliged the beseechers with selfies. “Everyone in Toronto keeps bringing him up.”

Hip (and hip hop) are simply not part of the India Hicks brand. Three years ago, the 50-year-old former Ralph Lauren model launched her eponymous lifestyle brand, which is a stylistic coming together of her two worlds: melding the quintessentially British aristo-quirk of her childhood with the chilled-out bliss of Harbour Island, the pink-sand Caribbean paradise she and her partner have called home for the past 25 years, and where they have raised five children.

New York magazine’s online fashion site The Cut has a terrific series entitled “I Like This Bitch’s Life.” Because some people don’t just have it all, but they look fabulous doing it and are also charming and kind, so you can’t hate them for it. I can think of nothing else sitting with Hicks, who is slender and toned, brimming with energy and enthusiasm. She possesses the kind of offhand flawless manners that only very well-bred British elites can weaponize, with the result that everyone she meets feels instantly at ease and simultaneously enthralled.

After all, why hide your fabulousness? Indeed, the end sheets of her new coffee-table book, A Slice of England, feature her illustrious family tree, starting with her grandfather, Earl Mountbatten of Burma, the last Viceroy of India, who was assassinated by the IRA in 1979. Her mother is his daughter, the heiress Lady Pamela Hicks; her father the iconic interior designer David Hicks, noted for his bold graphics, vibrating colour schemes and for being the first to mix up modern and antique in the staid salons of the British upper crust in the ’60s. Famously exacting in life — “He could be difficult,” says his daughter — his decors were playful, placing a Lucite coffee table with a Chippendale chair, for instance.

Hicks herself first floated into popular consciousness in a puffy white dress, topped with a floral tiara. Second cousin to Prince Charles, who is also her godfather, and currently 678th — give or take a few new royal babies — in line to the throne, she was conscripted into service as a bridesmaid at his wedding to Lady Diana Spencer, an event that stopped time that July day in 1981. Famous attendants run in the family: Lady Pamela Hicks served as bridesmaid to Queen Elizabeth at her wedding in 1947.

Her childhood was spent in a number of grand houses, first of all Broadlands, the home of her grandfather. The property and original manor date back to the Norman Conquest in the 11th century; the current Palladian-style mansion was designed by Capability Brown in 1754. Then there were her parents’ storied estates The Grove and Britwell, showcases for David Hicks’s talents. There were also vacation homes in Ireland and the Bahamas — a vacation home inspired by the Temple of Zozer in Egypt, a fantastical project also by her father on the island of Windermere in the Bahamas.

But the stiff-upper-lip lifestyle didn’t suit rebellious young India — she dubs her younger self as “defiant” — who, having been turfed out of Gordonstoun for entertaining boys in her rooms, set off at 18 to travel the world. She dabbled in modelling, and what she calls “her gypsy life” was chronicled in breathless detail in the society magazine Tatler.

At 25, she met her life partner (they have never married), David Flint Wood, a former ad exec who escaped that rat race for Bahamian bliss. They went on to have four children together, three boys, Amory, Conrad and Felix and a girl, Domino, and adopted a fifth, a teenager named Wesley, a local boy who lost his mother to cancer. “I send my kids away to school,” she says of the British boarding tradition, “but when you live on a pink sand beach, you know they will be keen to come home to visit.”

It is back to those formative family houses and the visual touchstones that informed her esthetic that Hicks has returned for A Slice of England. While her previous tomes Island Style and Island Life featured the couple’s plantation-style home in the West Indies, the latest details how they built their new English retreat, which they call America Farm, in Oxfordshire. “It is the house the Internet built,” she says of its long-distance construction. “Lucky, I inherited some fabulous antiques, and David is a collector, a hoarder really, so it all came together.”

The books are part of her visual storytelling tradition. “It was intimidating growing up with parents who are famous for their taste,” she says. “No wonder I ran away to find myself. I wouldn’t even call myself a designer until about 10 years ago.”

Aging is something she is much more comfortable with, though she did start with some great bone structure. Slim and toned, a fitness fanatic and avid runner, Hicks is clearly comfortable in her skin, wrinkles and all. “I couldn’t have done this before,” she says of launching the brand with German investors.
She had previously done a collection of scents and candles for Crabtree & Evelyn, plus run a curated shop on Harbour Island and some holiday rental units there; she was also a TV panelist on a show called Top Design out of L.A. for a spell.

Once a tabloid wild child, she now plays to that past and has pulled it all together and called it heritage. The items for sale, which range from smart totes to beetle-printed travel bags and palm-printed weekenders to candles and scents and skin care (natural and organic but with actives, she says, “as I’m now at an age where I care that something actually works”), designer clothing collaborations à la Goop, and jewelry, fine and costume. Especially notable is the line of remembrance tokens (to mark life’s major occasions, sort of like very sophisticated charm bracelets). These pieces, as well as the brand logo, a graphic of rotated Hs, all bear more than a passing tribute to her late father. Her mother, with whom she is very close, lives nearby their new farm, and some of the nicest pieces (purses, bracelets) in India’s range are named for Lady P. “I’ve got the life experience to draw on now,” she says. “And my kids are now old enough for me to throw myself into it all 100 per cent.”

Her army of ambassadors, which she calls her tribe, number some 3,000 strong. Home parties, which she attends whenever possible or does a “virtual pop-in” via video conference, are the main source of business in the U.S. market. Right now, she adds, sales in Canada at IndiaHicks.com are purely online, though local ambassadors, whose numbers are growing, can hold a party to spread the brand word.

She says the ambassadors, mostly in their 40s and up, are all “entrepreneurs, smart, savvy women. The retail landscape is changing fast,” she adds, “and I love giving opportunities to women who might not have the resources to pull together the concept, the investment and the business plan from scratch.” Each one is an independent operator, she says, pulling what they like from the line and highlighting the goods their own way to their own followers.

Hicks herself speaks fluent Instagram. Her feed is vibrant and full of live tours and interactive elements. She uses the content from catalogue shoots and TV appearances, chats with her mother in her garden and family events to craft a world view blending the Caribbean and the English seamlessly.

As at home in jodhpurs as she is in caftans, India Hicks has mastered the art of cool. And just in case you were wondering, the new book solves the mystery of what Hicks did with that famous bridesmaid dress. It hangs in a glass case, alongside her mother’s royal bridesmaid dress, in a bedroom at America Farm. “I teach my children, it is part of my business ethos, and I want to always remember myself how lucky we are. Family and home are at the heart of my life and the heart of my brand.”

Some families just have more fabulous memorabilia than the rest of us.