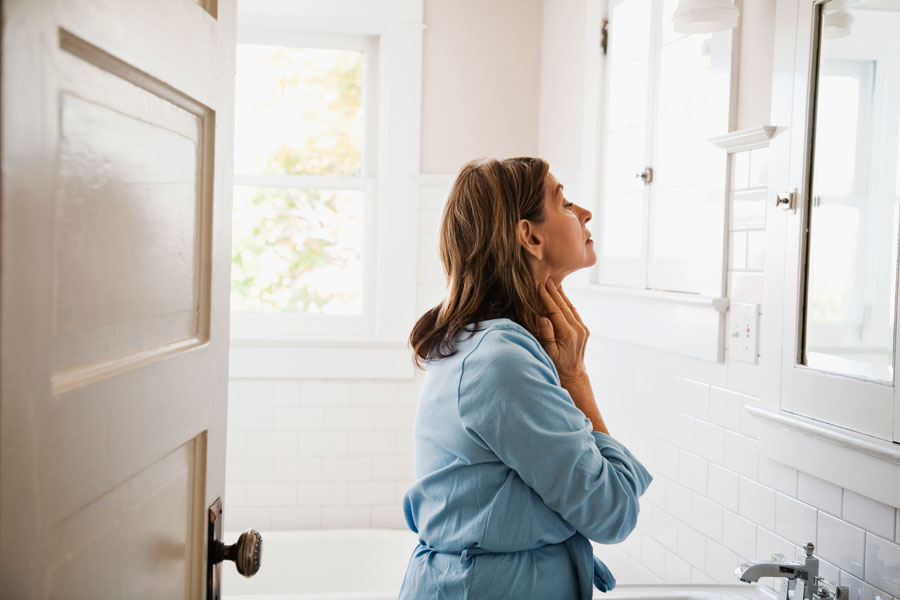 A few years ago, I wrote a feature for Zoomer magazine on plastic surgery — who was having it and why — among Canadians in the 45-plus zone. I spoke with men and women across the country who had undergone cosmetic nip-and-tuck procedures. The sentiment that stuck with me was from a woman named Fran in Edmonton. She explained that she had signed on for a neck lift when she realized her negative feelings about her aging appearance were keeping her from leaving the house. It took a few more years before the inexorable marks of time on my own appearance began changing my relationship with the world.

Forget selfies — I began evasive manoeuvres every time a cellphone was in range. I avoided mirrors. And eventually, I had to admit that I, too, was saying no to social situations because my confidence in my fading looks was shaken. How did I become such an uncool, insecure wretch?

As these things go, I picked one flaw to be a proxy for all that angst. And thus, on the cusp of a birthday milestone, I narrowed my obsession down to my chin(s). Even through seasons where I’ve been sample-size skinny, the padding under my jawline has been stubbornly double since birth, an annoying genetic glitch that my people call the unfortunate Smith chin. So when ads for Belkyra (Kybella in the U.S.), the fat-burning injectable recently cleared by Health Canada for use under the chin, began to accumulate on American TV and appeared on the beauty blogs I regularly read, a niggling idea took on momentum.

But I had a few other prejudices to wade through. About 15 years ago, as the editor-in-chief of a fashion magazine, I had tried a little Botox and a few fillers. Partly research for stories, partly a lark: I was too young then to need the boost. The technology was in its infancy, and plastic surgeons and dermatologists were learning how much to administer and where and when on early-adaptor guinea pigs like me. The results were unsurprisingly varied: my forehead was frozen in a mask once. I swore off the stuff. But nearly a decade later, the work I see around town now is much more imperceptible.

Then I asked myself, as I often do, what would Patti think? I have a lifelong obsession with punk’s poet goddess, Patti Smith, who at 70 has remained resolutely fearless about aging naturally. The woman who stared defiantly unkempt into Robert Mapplethorpe’s lens for the cover of her seminal 1975 album “Horses” redefined femininity and independence. She never used lipstick or eyeliner as a crutch. She made oversize overcoats and slouchy monochromatic black gear into a new androgynous chic. And she doesn’t mince words. As she told The Independent: “We’re being sold an image of how to exploit one’s self to get attention. It’s about redesigning the surface. I’ve been horrified by all these articles about Botox and plastic surgery as if it’s a normal thing.”

Other celebrities I admire have also spoken out against messing with Father Time with knives and needles, including Charlotte Rampling, Helen Mirren, Diane Keaton, Lauren Hutton and Julianne Moore. Even Stevie Nicks, who, in her previous (excessive rock ’n’ roll) incarnation, rarely said no to anything. And, of course, I fear looking like a Real Housewife.

But it was actually a friend with whom I share a birth year who turned around my (over)-thinking on this issue. She is smart, gorgeous, crazy successful and unencumbered by any doubts about her right to “take care of things.” She matter-of-factly selected the (discreet, perky) boobs she wanted, tidied up pesky eye creases that were slackening with time and minimized the after-effects of childbirth on her torso. Isn’t it our right as grown women to do whatever we choose with the money we earn ourselves?

Social media has helped erase the stigma of having work done, as people proudly post their before-and-after photos, new noses or lips or whatever bit they have designated as their own undoing. And plastic surgeons have hit on a great way to help us along on this journey. They have subtly deployed the concept of “genetic” flaws to help us work through our guilt about wanting to change things. After all, my chins aren’t my fault! It wasn’t the cupcakes or the Taco Bell drive-through! I can’t help my DNA!

It turns out I’m not alone. A recent Environics survey showed that 56 per cent of Canadians feel they have “a slight to significant” double chin that makes them “look older, heavier and less attractive.”

And so I found myself in Dr. Marc DuPéré’s Toronto offices. If you
have never been to a plastic surgeon’s office, they are really nice, with beautiful assistants, fancy coffee, lots of creamy marble and polished wood and fresh magazines. DuPéré was one of the first Canadian surgeons approved to perform Belkyra procedures.

So it comes to pass that he has my chins pinched between his fingers, feeling for laxity and checking to make sure I would be a good candidate. Belkyra, he says, works best if you still have some elasticity in your skin and if your platysma muscle — the muscle that runs from the chest to the shoulder and over the collarbone and slants along the sides of the neck — has not separated (which can occur naturally with aging). If it has, it needs surgical repair to tighten it otherwise melting away the fat in that area would highlight the rough and ragged separated muscle.

Belkyra (made by Allergan who brought the world Juvaderm fillers and Botox) is meant for “moderate to severe” superficial, subcutaneous fat. It is a deoxycholic acid (which naturally occurs in liver bile and which the body uses to dissolve ingested fat in our diets). It breaks the walls of the fat cells, which are destroyed and which never come back. The fat is released, absorbed and eliminated by the body. And while Botox lasts about six months; fillers last anywhere from six months to two years; Belkyra is permanent.

Turns out I’m a prime candidate, so we talk about how long and what to expect and how much it will cost. DuPéré is very careful to manage expectations: “This will not be dramatic. I believe we can get a good result with three or four treatments separated by four to six weeks between each one, but it will be subtle. I repeat: it will be subtle and you have to wrap your head around that. It will not be the extreme change of surgery.”

Belkyra runs around $600 a treatment with a minimum of two treatments; full lower-face lift surgery would be in the $9,000-plus zone and require at least a month of laying low, which who could really do?

I begin the treatment series, which consists of an assistant tattooing a temporary grid onto the skin under my chin, which has been numbed with topical cream. “You have to avoid the jawline, as there are major nerves there,” says DuPéré. “This product was approved for under the chin because there are no major nerves to hit. Hitting a nerve would result in paralysis.” It takes some getting used to, speaking with plastic surgeons. They are very matter-of-fact about dire side effects, like noses falling off. Obviously, they need informed consent. But some of it is a macho habit, in both male and female surgeons. Despite this, the doctor is congenial and chatty, with pictures at the ready of a trip to Europe to do a clay face sculpting class or his elaborate vegetable garden at his country house. Either way, the facts can be jarring at first, so it helps with the trust factor liking the person who is injecting you with potentionally dangerous substances.

DuPéré injects some of the solution into equidistant spots on the grid. It stings, and that stinging gets more acute as more product is delivered into the area. It is manageable but definitely uncomfortable. “It is the pH of the medium the Kybella is delivered in that is causing the stinging,” he explains. It will fade.

It will also swell up like a bullfrog, an unfortunate look that lasts a few days. I found myself drawn to my scarf drawer. And the area will feel what I called “injured,” or a bit prickly and sensitive to the touch, for a couple of weeks. Of the four treatments we did, four to six week apart and on the same points on the grid, I had two medium-sized bruises the first time, but the effects got much easier as the area shrank down. By the fourth treatment, I barely felt or saw anything.

It is weird doing something so subtle. The swelling with each treatment meant you had to wait weeks to see what the result was going to be. There is no instant gratification, but patience pays off.

So what about the results? Six months after starting, I’m a month past my fourth and final treatment. I told no one what I was doing because I was interested in unrehearsed reactions. One of my kids asked about a tiny bruise. My partner did not mention anything, but then he may just be a very wise man. Most tellingly, my mother asked me at a school concert if I had lost weight. That small comment meant I had the exact outcome I desired. Subtle, can’t put your finger on it, and my jawline is definitively crisper.

And do I want to leave the house now? I’m sure it is purely psychological, that I want to believe in my investment. It has definitely made a big difference in my confidence. I feel like I’ve done something positive about my appearance that was bothering me. And I do, in fact, look better in pictures: whether that is something others would notice objectively or just my own perception, who cares?

Except that once you solve one problem, like Heathers in high school, a new one pops up. So next I’m going to plan to fret about my upper eyelids ($4,950 for a lift, I checked). After all, I have the handy justification that that is “a genetic flaw” as well.