Lady in Red: Why Your Holiday Party Dress Should be Scarlet 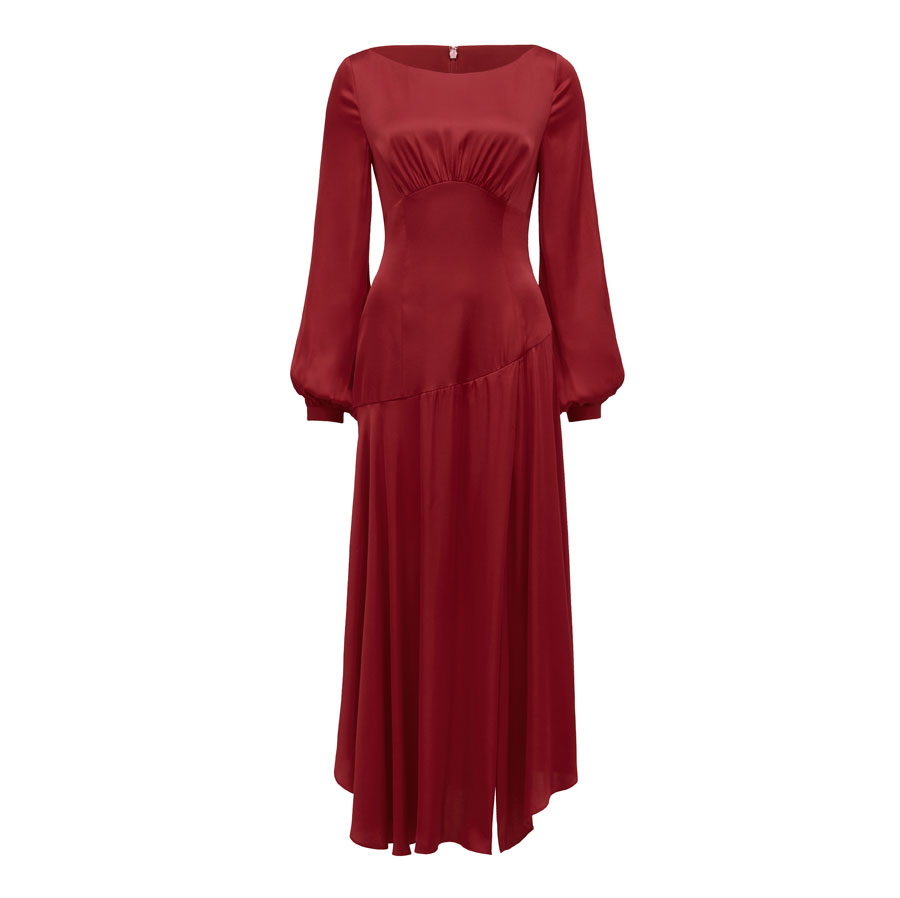 Despite the glittering atmosphere associated with the holiday season — garlands of tinsel, sparkling decorations and twinkling fairy lights — dressing for the festivities can be downright sombre. Many a party room can be a sea of black as most guests resort to that sartorial standby: the little black dress.

This year, spark the fire in a yuletide party with a red dress instead — bonus: it also happens to be on trend this season. Dynamic and electrifying, no one forgets the woman in red. Yet, pop culture has always painted the scarlet-clad woman with a tainted brush.

If the pious pilgrims had their way, they would surely have forced Hester Prynne to wear a red robe instead of merely pinning a scarlet letter on her bodice. But such bold coloured garments did not exist in the humble wardrobes of the 17th century puritans in Nathaniel Hawthorne’s novel, The Scarlet Letter. Forcing the adulteress Hester to wear red — even if it was as minuscule as the letter A — was the puritan form of slut-shaming.

A woman draped in rapturous red, once signaled to the world that she’s wanton and lustful. From Scarlett O’Hara in Gone with the Wind, to Vivian Ward, the hooker with a heart of gold in Pretty Woman, a woman dressed in siren red is not only a harlot but also one who has the audacity to flaunt that she is stepping beyond the traditional confines of her sex as dictated by a patriarchal society.

In Gone With the Wind, when Rhett Butler discovers that his wife, Scarlett O’Hara, still harbours feelings for another man, Ashley Wilkes, he forces her to wear the most audacious red velvet gown, trimmed in red feathers and swaddled in a cloud of red tulle, to attend his rival’s birthday party. In the post-Civil War years, such an ostentatious outfit was only befitting the madams of the bordellos. Rhett abandons Scarlett at the entrance of the party, leaving her to the merciless ridicule of the guests. But for her part, instead of looking shameful — and in one of the most iconic red dress moments in film — Scarlett held her head high, looking fiery and decadently defiant.

But that’s the power and allure of a red dress. Upon entering a room, women will eye the wearer with suspicion while the men will believe she is on the prowl for sex.

Much scientific research has been conducted to prove that women in red dresses have an affect on the opposite sex but much of it has been debunked. Yet, there are believers who swear there are hypnotic elements to this garment. Look no further than the popular mating game on television, otherwise known as The Bachelor, where you’ll notice a fair amount of the female contestants wear red gowns when they are first introduced to the bachelor, in the hopes they will not be eliminated immediately from the reality show.

Another favourite trope of the wearer of red dresses is the role of showgirl or prostitute. Satine, the showgirl played by Nicole Kidman in Moulin Rouge!, was often depicted in lusty blood red, indicating she was to be ravished or consumed — because what is a showgirl, if not a hooker with showbiz aspirations?

Interestingly, the charming hooker played by Julia Roberts in Pretty Woman won hearts in a red gown during the famous scene where she goes to the opera for the first time on the arm of Richard Gere’s character. It was the rare occasion where a hooker’s red outfit had a heartwarming effect.

Even the cartoon world sees a ruby red-clad damsel as a temptress. Jessica Rabbit, of Who Framed Roger Rabbit?, had the hyper-sexualized curves of a sex symbol. But while she might have declared, “I’m not bad, I’m just drawn that way,” the colour of her dress suggests she might have nefarious motives.

But perhaps the ultimate depiction of a lady in red as maleficent, is one found in the Bible. The Whore of Babylon is described in the New Testament, in the Book of Revelation, as a woman dressed in scarlet, astride a red monster who happens to be the Antichrist. Yes, the message is clear. The apocalypse will be lead by a woman in red and those who follow are surely headed for damnation.

In other depictions, the red dress-clad woman comes across as strong, powerful and in command. But at least in one instance, red attire indicated women’s downfall and loss of their rights. The award-winning Hulu television series, The Handmaid’s Tale, based on the 1985 Margaret Atwood novel, depicts a dystopian American society in the future where fertile young women are forced into child-bearing services for the elites. This servitude status is indicated by their mandatory red robes.

Thankfully, in real life and modern times, powerful women have embraced the red dress and some have even lent an air of iconic status to the once-reviled garment.

Perhaps the most famous example of a woman whose love for red was so legendary, it ignited it’s own colour code — Reagan Red. The late former first lady, Nancy Reagan, had a great sense of style and red became her trademark. She wore the colour in all manner of styles, from daywear (such as the Adolfo suit she wore to her husband’s swearing-in ceremony in 1981) to a range of gowns through out her eight years in the White House.  At a diminutive 5’4” she was proof that a confident woman can commandeer the powerful hue. She also showed that red can be elegant and graceful.

The fashion world also embraced red dresses and many designers have peppered their collections with a scarlet gown. But one designer became the undisputed king of the colour. Valentino first featured a red dress back in 1959 and it is said that a red dress is included in each collection since. He traces his love for putting ladies in red back to his student days on a visit to the Barcelona opera. He would say in an interview years later, he was struck by a grey-haired woman dressed in red velvet, sitting in one of the boxes.

“She looked unique, isolated in her splendour,” he said. “I never forgot her. She became the red goddess. Fabulous. I think that a woman dressed in red is always magnificent. She is the perfect image of the heroine in the middle of a crowd.”

So here is your chance to be the heroine in the middle of a little black dress party crowd. If ever there was an occasion to embrace a jolt of colour, it would be now; the most festive time of the year. And what better colour to wear than bold, exciting and joyous red?

See below for our selection of red dresses for this holiday season.