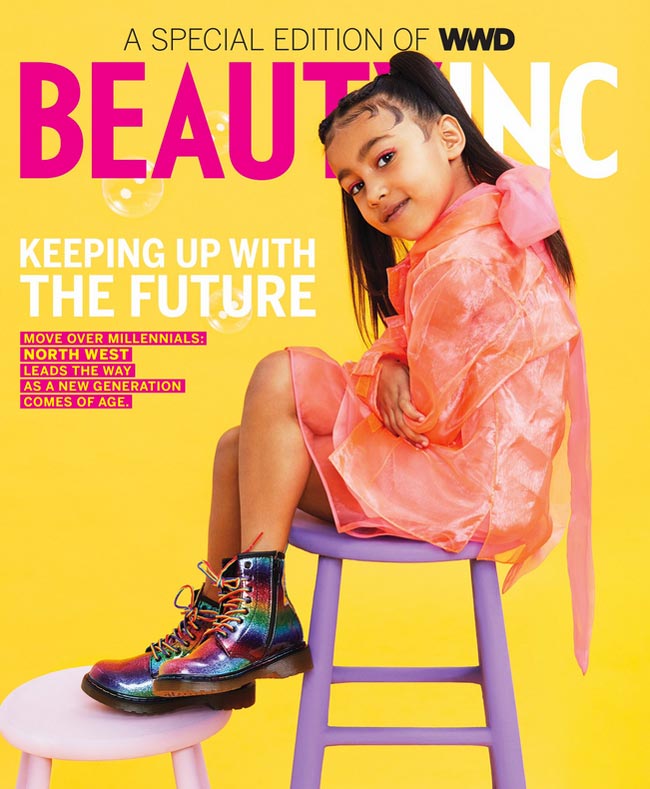 The five-year old daughter of Kim Kardashian and Kanye West is on this month's cover of WWD. (Photo: Twitter @kimkardashian)

If the five-year-old girls in your family are anything like my granddaughters at that age, they’re seriously into Lego, slime and colouring.

And by colouring, I mean using crayons to draw cockeyed rainbows and crooked trees on scraps of paper.

The five-year old daughter of Kim Kardashian and Kanye West, is also into colouring — with eye shadow, lipstick and blusher on her face.

Which is exactly what you’d expect from a cover girl, even if she’s kindergarten age and can’t spell “precocious.”

Yes, North (as in North West, for those not in the know) is doing her mama proud with her first magazine cover, this month’s WWD Beauty.

She’s posed there to make a point about how the coming demographic changes will affect the beauty industry.

“She embodies the upcoming youthquake,” gushes the magazine, referring to North’s Generation Alpha, and the one before it, Generation Z. By 2025, it’ll be the largest cohort, surpassing every other cohort, including Gen Z (people born from the mid-1990s to the early 2000s), Millenials, Gen Z and us Boomers.

In 2025, North West will be 11-years old and will likely have her own makeup line. Unfortunately she can’t call it North by Northwest — that title is already taken.

But it looks like there could be a big market for makeup for the prepubertal set, or even the preschool set, thanks to the example set by the Kardashian/West/Jenner clan.

North wears pink eye makeup on the magazine cover and has been seen wearing red lipstick.

“I don’t think she should wear lashes or too dark of a lipstick,” Kardashian told Refinery 29. “I want her to express herself, but I want her to be appropriate too.…I already know North is into makeup for sure.”