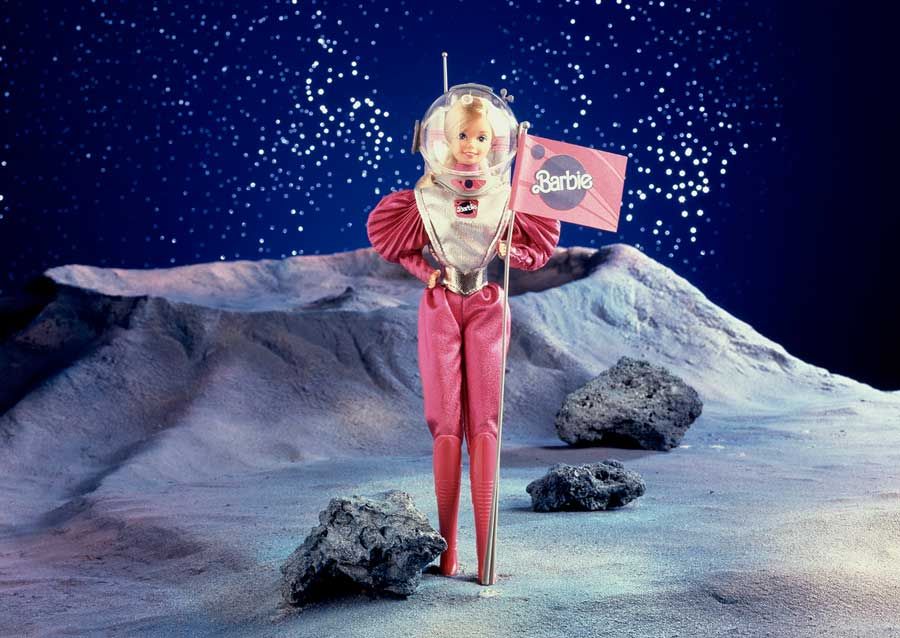 Working as Barbie's fashion designer for more than 30 years, Carol Spencer created several outfits that challenged gender norms of the time, including this spacesuit for Astronaut Barbie in 1986. Photo: Mattel Inc.

For 35 years, Carol Spencer was Barbie’s personal couturier, designing styles for the California doll that ranged from cocktail attire to beachwear, surgical scrubs to an eastern European Empress that sold for $50,000. Now 86, Spencer reflects on serving as Barbie’s personal stylist from 1963 through 1998 in her book Dressing Barbie (HarperCollins).

“It was like she was my best friend,” Spencer says over the phone from her home in Los Angeles, where she’s lived since the early ’60s, when she moved from the Midwest. Women, she writes, were expected to choose a career from a short list that included nurse, teacher, secretary, “seamstress,” and “shopgirl.” Those who didn’t like those options could always choose wife and mother. “When I graduated from high school I was supposed to be a secretary,” she says. “I couldn’t stand it. Taking shorthand and sitting there, working in an office, that was not for me.” Instead, Spencer enrolled in the fashion-design program at the Minneapolis School of Art.

When she arrived at Mattel four years after Barbie debuted in 1959, she was charged with reimagining current fashion trends in the doll’s size – roughly one-sixth human scale. “It took 18 months to get certain products into production,” she remembers. “By the time it was in production [the trend] would either be at the peak or slightly on the decline, but it would be well-known to the child. It didn’t have to be the initial fashion that Christian Dior had designed that week, because the child wouldn’t understand it.”

For example, it took nearly a year for a look that nodded to Barbra Streisand’s 1969 Oscar look to hit the market. Streisand had popularized the evening-pyjama trend with an Arnold Scaasi pantsuit with plastic sequins that, unbeknownst to her, turned see-through under the Oscar spotlight. Spencer used a similarly translucent fabric for Lemon Kick, but, in a spoof on Streisand’s bum-baring look, Spencer made sure Barbie wore a pair of oversized panties underneath.

Barbie’s undergarments were a bit of a fixation for anxious parents. “From the beginning, if we didn’t have underpants, parents would ask for underpants,” Spencer says. “They would say, if Barbie doesn’t wear them then the child won’t wear them.” Mattel tried everything from offering underwear separately to dolls with painted-on drawers but still found Barbie a reliable lightening rod for controversy.

“With any toy, especially for a child, you get a certain amount of comments,” Spencer says. “We made sure that the product was wholesome but also that it was fashionable and it followed the trends.”

One of the most vocal critics was the late Baptist minister Jerry Falwell who later became infamous for his conspiracy theory that Tinky Winky, the purple Teletubby, advocated a gay agenda. “He used to call our PR department every time a new line came out,” Spencer recalls.

In the ’80s, Barbie’s style goals shifted as her closet expanded to include looks that ultimately grew to represent over 200 professions including surgeon, rapper, executive, paleontologist (twice), game developer, and president. Barbie’s career ambitions reflected what was happening in North America. When she debuted in 1959, Stats Canada reports a quarter of women were employed or actively looking for work. By 1990, the percentage of women in the workforce was 76%.

Rather than reinforcing the traditional careers that Spencer had grown up with, Barbie’s “we girls can do anything” mantra positioned her as an unlikely trailblazer. For example, astronaut is a vocation that has appeared on Barbie’s resume a dozen times. Inspired by NASA’s first spacesuit designed for female astronauts, Spencer created a realistic spacesuit for Barbie in the ’80s. She even had her own flying space vehicle.

However, after giving the space-ready Barbie to kids to playtest, they found they were afraid of space exploration. Spencer returned to the drawing board and created a look that was less cosmonaut and more Cosmopolitan, turning to French designer Thierry Mugler’s chic, sci-fi babes for inspiration.

That wouldn’t be the last hurdle Spencer would face getting Barbie to space. Weeks before the collection was slated to debut, the Challenger space shuttle crashed, and the line was pulled. However, Spencer says that the ensuing outpouring of grief lead schools to focus more on educating kids about space which made them more curious and, ironically, less afraid. “That’s when we came out with the more realistic uniform for Barbie,” she says.

Barbie’s career ambitions may have been a convenient counterpoint to a building chorus of critics who felt Barbie was a poor role-model for little girls. Feminist critiques frequently called out her unrealistic body proportions—18” waist, 39” bust, and a size three shoe, according to eating disorder specialist Margo Maine’s book Body Wars.

Barbie’s proportions were so widely criticized that in 1997, Mattel redesigned the doll with a wider waist. In 2016, Mattel released three alternative body types for Barbie: tall, petite, and curvy, though even the curvy Barbie is only a size six.

No matter how many times she went to the moon, many considered Barbie’s traditional preoccupations – hair, clothes, boys and pink accessories – vapid (meanwhile, little boys continued to ram Hot Wheels into the fridge without drawing comment). It only stoked the perception that Barbie was pushing an anti-feminist agenda when one of the 270 phrases programed into 1992’s talking Teen Talk Barbie was “Math class is tough!”

None of this criticism would stop the consummate California girl from being adopted as a citizen of the world. Spencer notes the largest international markets for Barbie in her day were France, Germany, Italy, and, yes, Canada. Spencer worked on several of The Bay’s special-edition Barbies and even dressed Barbie in a Royal Canadian Mounted Police uniform.

Last month, Mattel posted an impressive 12% sales jump for Barbie as the doll adopts a strategy to become more inclusive. Dolls coming out in 2019 include Wheelchair Barbie, Astrophysicist Barbie, and a collaboration with National Geographic that has produced a Polar Marine Biologist, Photojournalist, Astrophysicist, Wildlife Conservationist, and Entomologist (that would be someone who studies butterflies).

Spencer only wishes the real world would catch up with Barbie (again, feminists might argue the opposite). For example, Barbie has modelled the possibility of a female American president.

“Still, we have a glass ceiling for the presidency,” Spencer says. “With each generation, times change. It’s an evolution. From the time that I started at Mattel in the ’60s, many, many things changed. Being a designer for Barbie, it’s almost as if I’ve been a historian of the culture.”

Not Child’s Play: The Serious Innovation Behind Toy Making