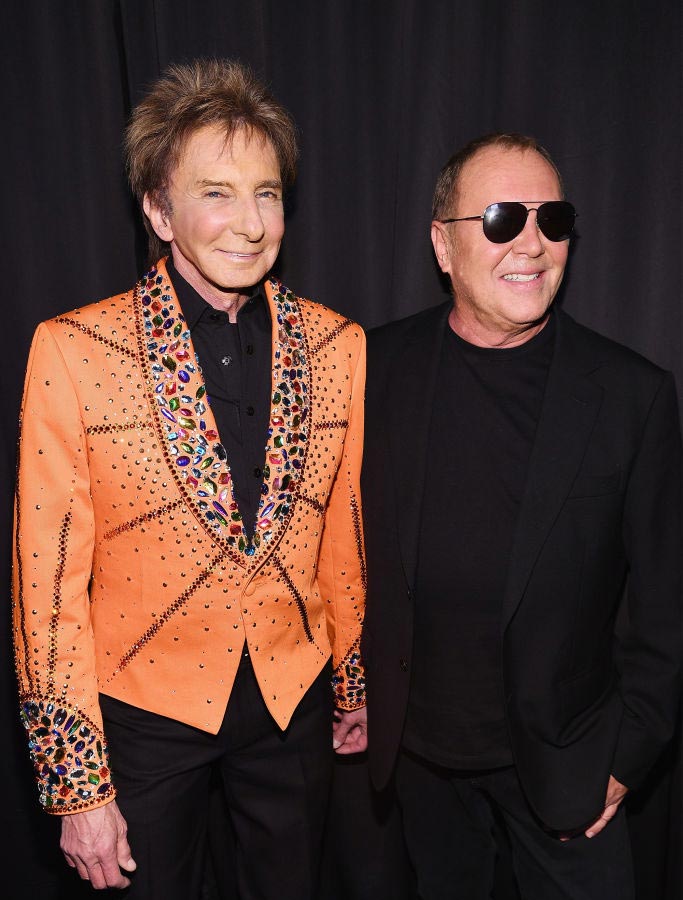 In today’s fashion world and particularly during fashion week, star quality is measured by the numbers on your social media platforms. How many followers and ‘likes’ one has on Instagram determines the scope of your influence, power and bankability.

The only problem with that equation is so often, these fashion influencers are overnight sensations and young in age. Their only talent seems to be their ability to put together an outfit and pose for photographs outside of show venues. Even models now are measured not just by their looks but also by the numbers on their Instagram.

Sure, someone with the last name of Kardashian or Jenner might register a signal on your radar and have the power to get cash registers ringing with a certain age group. It was pointed out recently that 21-year-old Kylie Jenner is the youngest self-made billionaire, beating out Facebook founder Mark Zuckerberg. But hers is a rare case and it can be argued that she has a powerful family of entrepreneurs behind her.

But could the fashion world be showing signs of fatigue when it comes to these young hotshot influencers?  As the presentation of the fall 2019 collections recently came to an end  in Paris, it seems that some designers opted for some true legends to bring some star wattage to their runway shows. By definition, a legend has to demonstrate extraordinary talent and be considered an icon in their respective field. Of course, to reach such status, they would have to be a ripe August age. And since fashion has a notorious reputation for not welcoming people of a certain age, it was refreshing to see designers reaching for the stars — old, iconic but none-the-less, true stars.

WATCH: On this episode of “Backseat Fashion” Zoomer’s Editor-in-Chief, Suzanne Boyd and Fashion Director at Large, Derick Chetty, dish on some of the legends who made appearances on the runways during the recent fashion weeks in New York and Paris.

Below, we round up some of the legends who made appearances on the runways during the recent fashion weeks in New York and Paris.

An hour before showing his fall 2019 collection, designer Michael Kors advised his show guests via Instagram to “bring (their) dancing shoes.” But that decree could not have prepared any of the guests for the surprise that awaited them at the 70’s themed show. With disco balls above the runway,  a soundtrack of disco hits, a gold fringed curtain parted at the finale to reveal Barry Manilow, dressed in an orange leather jacket performing his hit, Copacabana.

The designer told Billboard magazine, “Barry Manilow is a legend and ‘Copacabana’ was one of the iconic songs of my youth.” Kors added, “It was such a thrill to have him perform at my Fall 2019 show.”

And the jaded fashion corps in the audience, which included Hollywood A-listers, Michael Douglas and his wife Catherine Zeta-Jones, also felt that thrill of the moment, which brought everyone to their feet cheering.

On that wintery February day in New York, Manilow not only made the audience feel warm, but he injected some joy and fun into fashion — which is often forgotten.

A supermodel back in the 70s, known for her Amazonian body and all-American looks, she was a favourite of iconic fashion photographers such as Richard Avedon, Helmut Newton and Arthur Elgort. She was also a regular at Studio 54, where she met the Rolling Stones’ Keith Richards and went on to marry him. The couple — still married today after more than three decades — have two daughters. Hansen also survived two cancer scares.

Last year she told a British newspaper, “I don’t think a big comeback is in the stars at my age.” But yet, here she was at Michael Kors’ 1970s themed Fall 2019 show, sharing a runway with models younger than her two daughters. And looking fabulous doing so in a disco-era looking pantsuit.

Here’s hoping that the designer also uses her in the ads for his fall collection, because who better than an icon who lived and embodied the 70s, to bring the glamour and spirit of the era alive?

After more than 20 years since last walking a runway, this supermodel made a surprise appearance in Marc Jacobs’ fall show.

Back in the late 80s and much of the 90s, she along with, Linda Evangelista and Naomi Campbell, was known as the Holy Trinity in modelling. They were supermodels in every sense of the word and went on to become pop cultural icons, starring in George Michael’s infamous Freedom video.

On her Instagram account, Turlington gave three reasons why she came out of retirement to walk this particular show, “@themarcjacobs invited me to close his beautiful show tonight and I couldn’t resist. A. I have known and loved this man since I met him at age 16. B. I turned 50 this year and have arrived at a place where ‘Why the F not’ is the answer that comes up when I ask myself questions. C. I have a 15-year-old daughter who I desperately want to see and hear me and this is a medium that ‘speaks’ to her.”

Marc Jacobs is one of the most influential shows in New York and to have this iconic model close his show — which was also the last show of NYFW — signaled a high note ending.

Her career spans five decades and it looks like the legendary model Pat Cleveland is having another defining moment in fashion. This season she walked the New York runways at Naeem Khan and Hellessy fall 2019 shows. She twirled her way down the runway at Laura Biagiotti in Milan and then over to Paris for the Tommy Hilfiger show. Her daughter, Anna is also a model.

But her return to the Paris runways was of particular significance. One of Cleveland’s historic notes in fashion was back in 1973 when she participated in a fashion show at the Palace of Versailles. The fashion show — which had European royalty and Hollywood personalities in attendance — was more or less a contest between five revered French designers against five upstart American designers to see who was more superior when it came to design.

The show would go down in fashion history as the Battle of Versailles and the night that American fashion broke out onto the world’s stage. The Americans not only wowed the audience with their easy, sexy, fluid clothes but also the manner in which they staged their portion of the show. The French relied on complicated sets while the American designers had their models dancing down the runways in a lighthearted manner. They also had a large cast of black models — all of which were unusual for the times, but would go on to be revolutionary.

Cleveland being one of those models in that historic fashion show, still embraces that sexy lightheartedness and fluid movement on the runway. And in the Tommy Hilfiger show, instead of the robotic expressionless strut models are encouraged to do these days, the legendary model swirls, twirls and dances down the runway, intent on putting the ‘show’ in fashion show.

The Tommy Hilfiger collection shown in Paris in early March was a collaboration between the American designer and the pop star and actress Zendaya. The Gen Z performer is also an activist and quite vocal about racial representation, hence for this collaboration, the show not only featured an all-black cast but also various body types and ages ranging from 18 to 70.

But it was the 70-year-old who brought the house down and got a standing ovation. The legendary performer Grace Jones — once a model in her younger days — closed the show, dancing down the runway to the tune of her hit, Pull Up to the Bumper. The TommyX-Zendaya show was an ode to another legendary fashion show in Paris — the aforementioned Battle of Versailles in 1973 – where Black models helped ushered in a new era in fashion.

Zendaya told Vogue she really wanted Grace Jones to be part of the show, which also included other Black model icons Pat Cleveland, Beverly Johnson and Veronica Webb. “We said, ‘We want Grace Jones, she represents so much beauty and power and she needs to be here,’ and somehow, Tommy’s team made it happen.” Kudos to the 22-year-old star for recognizing the monumental influence Jones continues to wield.

When the Jamaican American Jones tried to kickstart a modelling career in New York City back in the 1970s, she was pretty much shunned by the establishment. But once she moved to Paris, designers such as Yves Saint Laurent, Kenzo and Claude Montana embraced her and soon she landed the covers of Vogue and Elle. When Jones return to New York later in the decade, she was embraced by artists such as Andy Warhol and Keith Haring and launched a successful recording career, where her hyper-sexualized style made her a perfect fit for Studio 54 and the disco era.

By the 1980s, Jones had honed her unusual looks – her dark skin, angular cheekbones, flattop afro – into a career-defining aesthetic that pushed the boundaries of gender. She ignited the androgynous look of the 1980s. It was also the decade where her acting career took off and she played May Day in the 1985 James Bond classic, A View To A Kill. But true to form, her Bond girl was like no other – fiercely strong, a killer dress sense and showed Bond who was on top in bed.

Jones’ album covers – a collaboration with the creative director Jean-Paul Goude and father of her son – remain iconic to this day. And her fashion looks continue to be mined by today’s pop stars like Lady Gaga, Nicki Minaj and Rihanna. Jones’ for her part, once said, “I’m not fashion, I’m style.”

And lest you think she’s riding on her laurels, Jones still performs and is very much still the provocateur. Back in 2012, she performed at the Queen’s Diamond Jubilee Concert outside of Buckingham Palace, wearing a body suit, stilettos, a giant hat and hula-hooped through her entire rendition of Slave to the Rhythm.

After 12 years in the making, she finally released her documentary film, Bloodlight and Bami at the 2017 Toronto International Film Festival.

It was touching that someone as young as Zendaya knew enough history to recognize that trailblazers like Grace Jones helped pave the way in fashion and music and ignited the conversation on inclusivity decades ago.