Pride Month: 7 Gay Designers Who Changed How We Dress 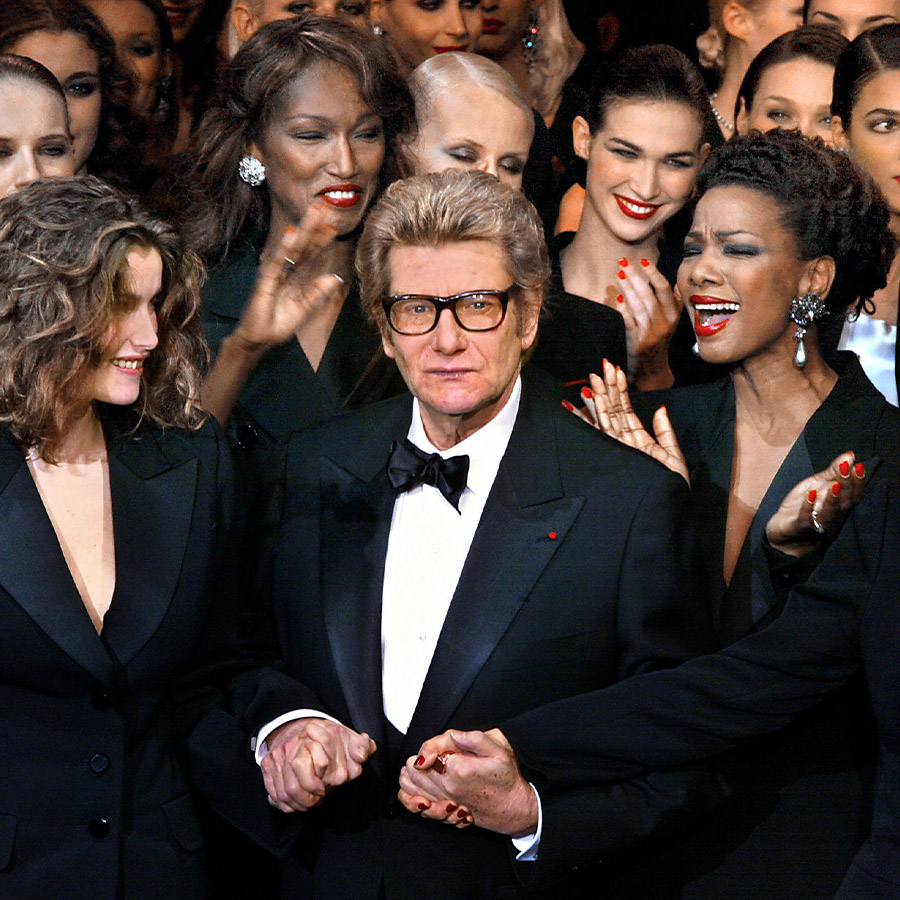 Some of the masters of fashion, such as Christian Dior and Cristobal Balenciaga, were gay men who hid their sexuality due to societal pressures of the era they lived.

Today, it’s widely accepted the fashion industry is populated with many gays, most of whom are out and proud and at the helm of some of the biggest brand names. But does the fact they are gay contribute in any way to their success or talent? Scratch the veneer of that notion and a few controversial debates begin to surface.

Donatella Versace, patron saint of many gays, in a 2016 interview questioned whether gay men made for great designers. She said gay men design for the ‘woman they want to be’ rather than the customers. Yet, her fashion label had some of its most glorious years under her gay brother, the late Gianni Versace.

Kanye West said in a 2015 interview he felt discriminated against in fashion for not being gay. However, he has since shown huge commercial success with his Yeezy label.

It should be noted there are many straight designers — Ralph Lauren and Tommy Hilfiger, to name a few — who run global fashion companies. Just as there are straight female designers — Miuccia Prada, Stella McCartney, Diane von Furstenberg — behind successful fashion brands.

As the fashion historian Valerie Steele once said, “There is no gay gene for creativity.”

In celebration of Pride Month, we salute a select group of gay designers whose work ignited social movements and sparked revolutionary changes to the way we dress and look. (And yes, there are many more gay designers who operate hugely successful labels — which make them savvy merchants).

But this group of seven moved the dial forward in fashion to the extent where the average person on the street still feels their influence today.

The YSL oeuvre includes many trailblazing moments in fashion. He was one of the first designers in Paris to feature a multi-cultural cast of models in his runway shows back in his 1970s couture shows. Also a visionary, he saw the coming democratization of fashion and became one of the first French couturiers back in the 1960s to start a ready-to-wear label. And some of his trend-setting looks from the 60s and 70s — safari, Bohemia, unorthodox colour pairings — continue to inspire fashion today.

But there was one look he designed — which proved shocking at the time — that not only revolutionized the way women dressed but also signalled sweeping social change. In 1966, he introduced Le Smoking — a tuxedo look for women. Not only was it androgynous, but also sexy and powerful. It would pave the way for his pantsuits just as women were entering corporate culture and ready for power dressing. Today, le smoking is a classic — and a veritable sartorial workhorse in many a woman’s wardrobe.

The 86-year-old designer continues to oversee nearly every aspect of the vast empire he created over four decades ago, which now includes hotels, restaurants and home furnishings. Today, his net worth is more than US$8 billion. Not bad for someone who started his fashion career as a window dresser for an Italian department store.

The Armani label got a huge boost in North America when Richard Gere wore his clothes in the 1980 movie American Gigolo. The brand would be featured in over 100 movies and television shows, including The Untouchables and Miami Vice. During the 80s, the Armani label was a favourite of Hollywood power brokers and would become a symbol of success.

But it was his re-invention of men’s suiting which resonated beyond the silver screen and the red carpets to infiltrate even the wardrobes of the Everyday Man with something called the Unstructured Suit. He was the first designer to literally take the stuffiness and stiffness out of men’s jackets with the removal of the lining and introduction of innovative fabrics. Rather than an imposing rigid jacket, he made the garment drape softly along the body. For female suitings, he did the same thing, making it fluid and softening the shoulders, essentially taking away the sharp edges of power dressing. Thanks to Mr. Armani, suits today can be languid yet evoke power.

The earliest indication that a milliner by the name of Roy Halston Frowick would go on to become one of America’s greatest designers was in 1961, when Jackie Kennedy wore one of his pillbox hats to her husband John F. Kennedy’s inauguration. The hat would become a defining style moment of the First Lady.

By the time the 70s rolled around, the milliner would become known as the glamorous fashion designer, Halston. His designs were minimal,  modern and elegant. Often zipper-less and slinky, it was all about ease and being unabashedly sexy. The Halston look arrived on the scene the same moment women were liberating their bodies by going bra-less, looking for comfort and glamour with multi-tasking clothes that could take them from day to evening.

The mystique of the Halston brand was also fuelled by his hedonistic lifestyle, which included nights at Studio 54 with pals that included Elizabeth Taylor, Liza Minnelli and Bianca Jagger — often wearing his clothes. He travelled everywhere with a bevy of his favourite models, dubbed “the Halstonettes,” all wearing his designs. Yes, almost four decades ago, Halston was pioneering a modern day concept — the Influencer.

He sold his label in the 70s but lost the rights to his name in the 80s. With addiction issues and discovering he had HIV in 1988, he moved to San Francisco and died two years later.

Most of his designs, however, still stand the test of time. According to one report, one of his bestsellers was his ultra suede shirt dress. Today, countless brands execute a version of the shirt dress. It is a staple in many working women’s wardrobes and is a cool alternative to an office suit.

And, of course, his life and legacy serve as the subject of the new Netflix miniseries Halston, starring Ewan McGregor as the eponymous star.

The designer cultivated a brand which epitomized stark minimalism and clean modern lines. (The company was sold to Phillips Van Heusen Corp in 2002.)

However, it was the jeans, fragrance and underwear divisions of the Calvin Klein brand that gained mainstream success with attention-getting — and sometimes controversial — advertisements. A teenaged Brooke Shields purred in one of their jeans commercials that “nothing comes between her and her Calvins.” And the designer’s fragrances, such as Obsession and Eternity, became blockbusters.

But the designer truly did wonders for men’s underwear — a category which lacked glamour and designer prestige and was a basic purchase by girlfriends and moms.

Klein launched an underwear campaign in 1982, featuring Olympian pole vaulter Tom Hintnaus. Shot by Bruce Weber on the Greek isle of Santorini, the iconic photo showed the bronzed athlete leaning against a whitewashed chimney outdoors in nothing but a pair of white briefs.  The ad not only appeared in magazine but was also featured on a giant billboard in Times Square. It heralded the first time men were viewed as sex objects in ads — women and both straight and gay men loved it — and unleashed a stampede for Calvin Klein underwear. He made men pay attention to what they wore when they undressed.

The French designer has always been known for playing with androgyny in his work. Whether it was putting men in skirts or using androgynous model Andrej Pejic in a fashion show to model both male and female outfits, he was one of the first major designers to consistently break down gender stereotypes. While critics at the time would sometimes dismiss it as runway hijinks, today there are young designers who are now pushing exclusively gender-fluid collections.

Gaultier also broke another gender barrier when it came to cosmetics. In 2008, he launched a men’s makeup line and the ad featured an executive type male in a pinstriped suit, applying some concealer. The makeup line is no longer around and the marketing of makeup to men remains tricky. But Gaultier was way ahead of the pack in his vision of fashion and beauty not divided solely by male or female.

Fast forward and now you have major beauty companies such as Cover Girl, who made headlines by announcing their first Cover Boy in 2017, and L’Oréal featured a male model amongst the female faces,in one of their Infallible foundation ads. And none other than Chanel, the most prestigious of beauty brands, launched a makeup line, Boy de Chanel.

When he committed suicide in 2010, the world lost one of the greatest designers of the 20th century. To paint a broad description of his legacy, he was fearless, provocative and found beauty in the dark and macabre. His clothing featured exquisite tailoring, honed from his years learning his craft on Savile Row. His runway shows were thought-provoking, spectacular and theatrical productions.

Alexander McQueen’s influence can be seen on city streets today, thanks to those ubiquitous scarves with skull prints — which are most likely a knock-off from a fast fashion chain. But skulls were merely a motif of the designer.

One of the ways the designer truly changed fashion with seismic repercussions can be traced back to 1996. One of his collections featured bumster trousers — pants cut so low, they skimmed the pubis and exposed the top of the bum cheeks.  Naturally they were controversial, but they sparked a revolution with low-slung trousers. McQueen had literally lowered women’s waistlines. It influenced denim manufacturers trying to outdo each other with low-slung jeans, which sparked many a debate on how low is too low.  Only in the last few years have jeans and trousers started inching back to a natural waistline.

The German designer founded her company at age 24 in 1968 and sold it to Prada in 1999, but it has since changed owners a few times. The designer herself had a stop-go relationship with the brand, finally departing in 2013.

British Vogue calls her fashion’s first feminist. She made influential contributions to the modern business woman’s wardrobe by showing there was an alternative to simply putting women in a men’s suit. She sculpted a clean, spare yet luxurious look based on principles of the Bauhaus movement — functional, rational and practical for everyday life. She would refer to her signature as quiet beauty and serenity. Even the fragrance she launched was simply called Pure.

She developed a cult-like following of jet-setting executive women who adored the understated elegance and austere hues of her clothes. She showed powerful women how to make an impact in quiet clothes.